YOUNTVILLE, Calif. - California Gov. Gavin Newsom chose to speak at the Veterans Home of California in Yountville on Friday ahead of Memorial Day to thank "our American heroes" for their service and remind the public that these types of facilities are often disproportionately affected by COVID-19.

As of last week, there was just one resident across eight veterans homes, who has tested positive for COVID-19, out of nearly 2,100, CalVet's website says.

Newsom also took the time to share an unusually intimate detail of his family life: He said his grandfather was a prisoner of war for nearly five years who eventually took his own life after returning home.

And with that, Newsom introduced Secretary of Veterans Affairs Dr. Vito Imbasciani, who also spoke of his own grandfather, a 98-year-old WWII Marine.

Vito then began to outline the precautions he started taking in January to protect the veterans in his care.

Vito said he took 38 steps to close down the campus "which I was afraid would run wild through the veteran population."

For example, doctors and nurses are stationed at every location and all 3,000 employees are trained in infectious disease prevention, Vito said.

Since coronavirus broke out, all admissions to veterans homes have been temporarily suspended, according to CalVet.

And as of mid-March CalVet began restricting all visitation to the homes except to those in hospice care. 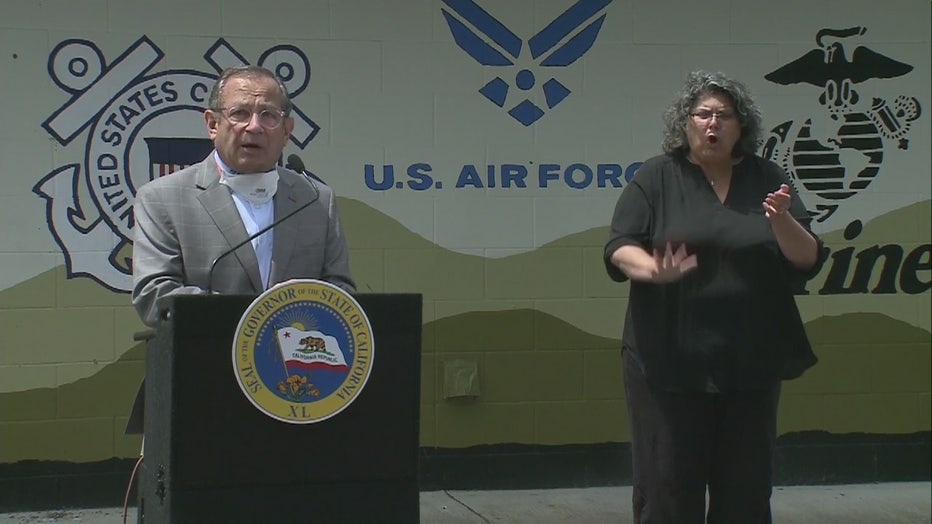 Secretary of California Dept. Veterans Affairs Dr. Vito Imbasciani, who also spoke of his own grandfather, a 98-year-old WWII Marine.