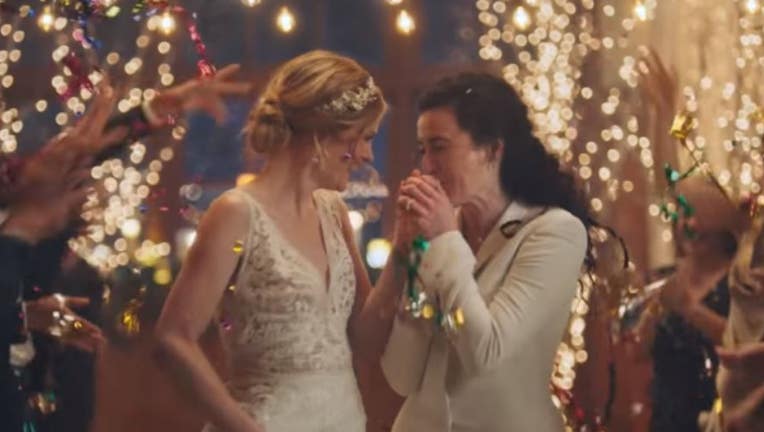 NEW YORK - The Hallmark Channel will reinstate same-sex marriage commercials that it pulled from the network, according to a company statement sent Sunday.

An ad for wedding planning site Zola featuring two brides kissing at the altar was pulled following a complaint from the conservative group One Million Moms. A Hallmark spokesperson previously told The Associated Press that the network pulled the ad because the controversy was creating a distraction.

"The Crown Media team has been agonizing over this decision as we've seen the hurt it has unintentionally caused. Said simply, they believe this was the wrong decision," Hallmark Cards CEO Mike Perry said in the statement. "We are truly sorry for the hurt and disappointment this has caused."   Hallmark was facing some bitter criticism on social media over its initial decision to pull the ads.

The hashtag (hash)BoycottHallmark was trending at one point on Twitter, and celebrities like Ellen DeGeneres and William Shatner assailed the decision. "Put the commercials back!" Shatner wrote. DeGeneres asked: "Isn't it almost 2020?"

The LGBT advocacy group GLAAD called the initial decision to remove the Zola ads "discriminatory and especially hypocritical coming from a network that claims to present family programming and and also recently stated they are `open' to LGBTQ holiday movies." The group said it would be asking other Hallmark advertisers where they stand on the issue, and if they will pull their advertising.

Zola said after the commercial was pulled that it wouldn't advertise on the channel. It wasn't clear if the company's decision has changed since Hallmark announced it will reinstate the ads.

The conservative group One Million Moms, part of the American Family Association, had complained about the ads personally to Bill Abbott, CEO of Crown Media Family Networks, Hallmark's parent company.

A post on the group's website said that Abbott "reported the advertisement aired in error." The group also wrote: "The call to our office gave us the opportunity to confirm the Hallmark Channel will continue to be a safe and family-friendly network."

Zola had submitted six ads, and four included a lesbian couple. After Hallmark pulled those ads, but not two featuring only opposite-sex couples, Zola pulled its remaining ads, the company said.

"The only difference between the commercials that were flagged and the ones that were approved was that the commercials that did not meet Hallmark's standards included a lesbian couple kissing," said Mike Chi, Zola's chief marketing officer, in a statement sent to the AP. "All kisses, couples and marriages are equal celebrations of love and we will no longer be advertising on Hallmark."

One marketing analyst said the family friendly Hallmark network put itself in the middle of a PR crisis that it should have seen coming.

"They've got trouble on their hands, and they've got to do something fast," said Paul Argenti, a Dartmouth College professor of corporate communication.

Hallmark's statement said the network will be "working with GLAAD to better represent the LGBTQ community" and will be reaching out to Zola to reestablish its partnership and reinstate the commercials.

"Across our brand, we will continue to look for ways to be more inclusive and celebrate our differences," Perry said.    In one of the pulled ads, two brides stand at the altar and wonder aloud whether their wedding would be going more smoothly if they had used a wedding planning site like Zola. The lighthearted ad ends with the just-married couple sharing a quick kiss.

"All the groovy gay ladies i know won't be watching your Christmas schlock," she wrote on Twitter, addressing Hallmark.

The Hallmark decision was also mocked on "Saturday Night Live," and Netflix US tweeted stills from a TV show and movie that it labeled "Titles Featuring Lesbians Joyfully Existing And Also It's Christmas Can We Just Let People Love Who They Love."

The developments came as Hallmark appeared to be considering more same-sex themed content.

Asked about the possibility of holiday movies based on same-sex relationships, Abbott was quoted in The Hollywood Reporter in mid-November as saying on its TV podcast: "We're open to really any type of movie of any type of relationship."