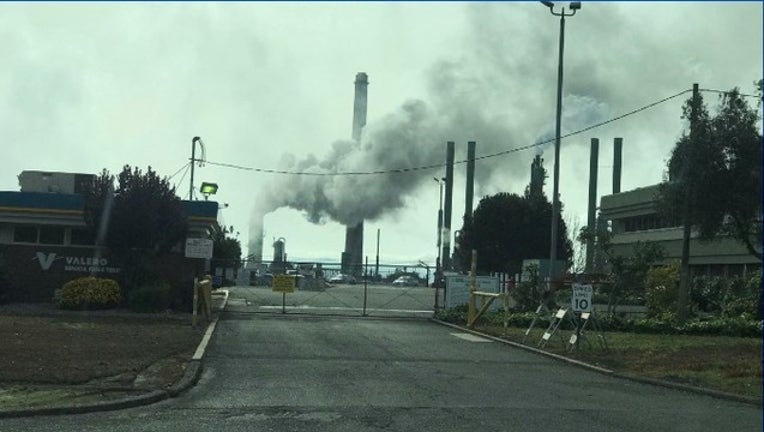 Officals have issued an adivsory for Benicia residents with respiratory issues to stay inside due to an incident involving emissions from the Valero Benicia Refinery.

BENICIA, Calif. (BCN) - Improving air conditions prompted the city of Benicia on Sunday afternoon to lift an earlier health advisory regarding emissions and heavy smoke from the Valero Benicia Refinery.

About 7 a.m. Sunday, the city advised residents with respiratory issues to stay indoors and close all windows and doors. About 12:30 p.m. the advisory was lifted, and city officials said air conditions were within normal limits.

Valero announced mid-morning that it was performing a controlled shutdown of its Benicia facility, after it was determined that a stack was emitting particulates containing coke, a byproduct of the refining process composed primarily of carbon particles.

Testing showed no heavy metals at harmful levels, but the particulates can cause discomfort and worsen respiratory problems such as asthma, officials said.

A Valero spokeswoman said the emissions were the result of "operational issues" with the refinery's flue gas scrubber.

On Sunday afternoon, the refinery was "in the process of safely shutting down processing units contributing to this situation in a manner that minimizes impact to the environment and community," said Valero spokeswoman Lillian Riojas.

During the shutdown there may be visible plume and flaring, Riojas said.

Refinery officials will be in contact with the city and other agencies and will be conducting air monitoring during the shutdown, Riojas said.

Routine updates on the emissions can be found at ci.benicia.ca.us, on the city's Facebook page at  https://www.facebook.com/CityBenicia/.