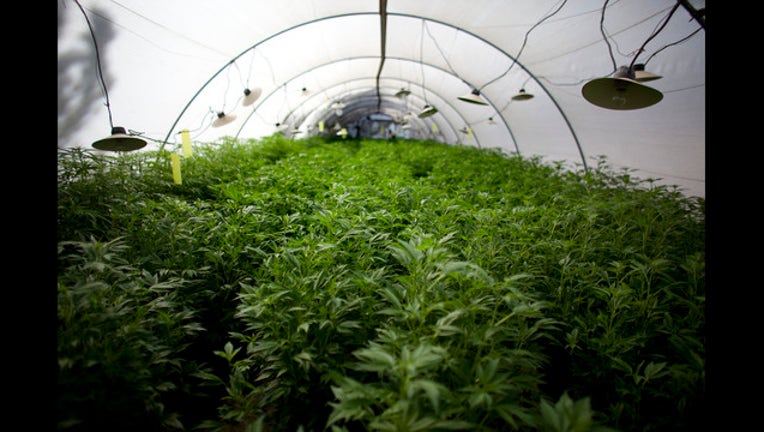 LOS ANGELES (AP) - Most Californians with an urge to smoke a joint will enter the state's legal marijuana marketplace through a single doorway -- at a retail shop.

But out of view of those day-to-day sales, the state is ushering in a sprawling, untested system to move pot from place to place that will also serve as a collection point for taxes, a gateway for testing and a packaging center for the plant's fragrant buds.

The so-called marijuana distributor is a kind of skeleton connecting the state's emerging industry of growers, sellers and manufacturers. It's envisioned as a vast back office where the grunt work of keeping track of cannabis and getting it from farms to store shelves will take place.

But just days after legal sales began, there are concerns that not enough companies are licensed and ready to transport pot. Some predict that within weeks, cannabis could be marooned at fields and warehouses while dispensary shelves go barren.

"There's going to be huge bottleneck in the distribution network in California at some point," said Terry Blevins, CEO of a security firm and a part-owner of a marijuana distribution company in Southern California.

Billions of dollars of pot will need to move through the market in 2018, and "I don't believe there are enough businesses to handle it," he said.

California's new market was rattled Thursday when the Trump administration signaled a more aggressive approach to marijuana prosecutions, lifting an Obama-era policy that kept federal authorities from cracking down on the pot trade in states where the drug is legal.

The impact of Attorney General Jeff Sessions' decision is uncertain. But some predict it could discourage businesses from entering the distribution system, while making those in it extremely cautious about what growers and sellers they work with, narrowing the pipeline for moving goods.

A patchwork of rules has emerged so far, with some cities allowing legal sales and others banning all commercial pot activity. Los Angeles -- the state's biggest market -- has yet to authorize any licenses, though the first could be issued next week.

Kana Flow, which is developing a new distribution center on the site of a former Mendocino County winery, transports cannabis for about 100 local producers.

While many retailers stocked up in advance of legal sales, "I do think we are going to see a big reduction in supply," Steinmetz predicted.

A crimp in the supply chain, if it happens, would reprise what occurred in Nevada last year, when the start of legal sales saw a surge in demand with too few licenses to distribute it.

Pot distribution in California has long been an informal and largely hidden business, with arrangements made between growers and sellers. The move to the new system will be a major transformation: Under California law, pot can be transported only by companies holding a distributor license.

In the past, "it was all trust and handshakes," Los Angeles dispensary owner Jerred Kiloh said. "Growers would drive it down in their Toyota Tacoma."

Under a 2015 law for medicinal pot, the distributor was envisioned as an independent entity that could not hold licenses in other categories, such as growing or selling.

But that changed in later legislation for the new market, and now pot distributors can be stand-alone companies or part of another one. That means a grower could also become a distributor, providing proper licenses are issued.

"I'm feeling pretty good that we are going to be OK," Ajax said.

The uncertainty surrounding the distribution pipeline is just one question mark as California attempts to transform its longstanding medicinal and illegal marijuana markets into a multibillion-dollar regulated system.

It will take many months, if not years, for the market estimated to reach $7 billion to evolve.

Legal sales began Jan. 1 without a vast computer system for businesses to use to track plants from seed to sale. State licenses issued so far are temporary and will have to be redone later this year.

Few banks want to do business with pot companies since the drug remains illegal federally, forcing many growers and sellers to operate in cash. And consumers are complaining about hefty new taxes.

Industry experts say California's distribution model -- part of its effort to keep a tight clamp on regulation -- is unusual in the U.S.

Along with transporting pot, a distributor has a range of responsibilities, including collecting state excise taxes from any retailers they supply and cultivation taxes from growers whose product they move.

Distributors also arrange for laboratory testing to make sure the pot isn't tainted, and may also package and label pot for sale.

It's the "traffic light on the industry," cannabis attorney Robert Raich said.

Some of those entering the business have experience in transportation, including in the alcohol industry. But others might not realize the complexity of the new system, or be unfamiliar with how the pot market functions.

"That's where there is going to be a lot of confusion. They haven't taken taxes before. They don't know how to deal with all the logistics of this supply chain," Kiloh said.

In the past, retailers could "sit in their business and wait for sellers to come to them."