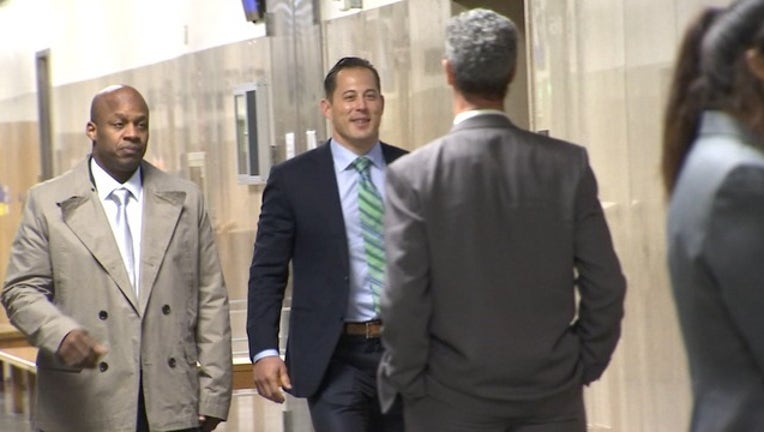 After the verdict was read, Judge Carol Yaggy remanded Officer Christopher Kohrs, 40, into custody without bail, explaining that because Kohrs had made himself unavailable to police for about eight hours after the collision, there was a possibility he could flee again.

"This is someone who reacted to a situation," Furst said. "He didn't appear before the police for a number of hours, but he did come in himself and the idea that he's a flight risk because of that one incident is not one with which I agree."

Kohrs became known as the "Hot Cop of the Castro" because of his time spent patrolling the Castro District and participating in events such as the San Francisco AIDS Foundation's Big Gay 10K race.

On Nov. 29, 2015, an off-duty Kohrs was driving with his brother and a friend around 2:20 a.m., when the vehicle he was in struck pedestrians at the corner of Broadway and Montgomery Street. The pedestrians, two men, were sent flying in the air.

The collision drew a crowd and, after recognizing Kohrs, some began yelling "Hot Cop" and, according to Furst, some shouted epithets and threatened Kohrs with physical violence.

During the trial Furst had argued that after Kohrs checked on one of the victims, he realized that he was in immediate danger and delegated the tasks of checking on the victims and calling police to his brother, Nathan Kohrs, before fleeing the scene.

Prosecutor Rolando Mazariegos argued during the trial that Christopher Kohrs fled in order to avoid a blood alcohol test and left the victims for dead.

Kohrs turned himself in at police headquarters around 10 a.m. that day, after he was identified by investigators as the registered owner and driver of the Dodge Charger that was left at the scene.

Max Szabo, a spokesman for the San Francisco District Attorney's Office said, "We're very grateful to the jury for their service in this case and we're very supportive of the decision that they reached. This was a decision a couple years in the making... but ultimately this man was brought
to justice.

"It doesn't matter whether you're a police officer or an everyday person, everyone needs to be held accountable for their actions," Szabo said.

According to Mazariegos, one victim suffered a missing tooth, a broken jaw, a fractured ankle, and an injured shoulder ligament, while the other suffered a broken nose, a broken eye socket, a broken neck, a brain hemorrhage, a spinal fracture and memory impairment.

In March 2017, Kohrs settled a civil lawsuit filed against him by one of the victims.

Kohrs is scheduled to be sentenced on April 4.