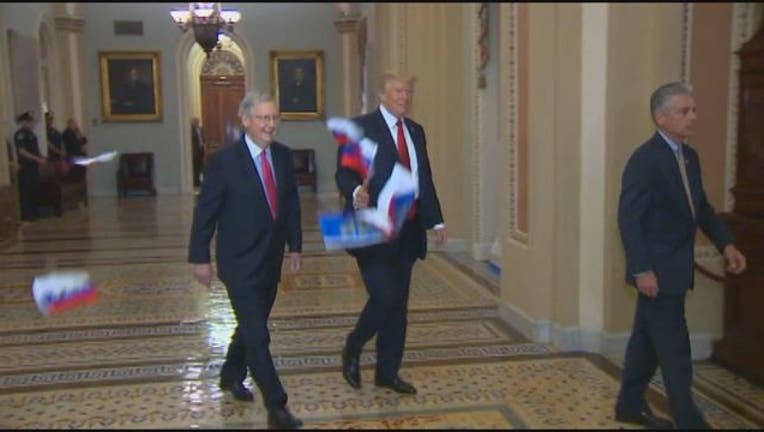 WASHINGTON (AP) -- The Latest on the probe into contacts between the Trump campaign and Russia (all times local):

Republicans on the House Intelligence Committee have voted to release a classified memo they wrote that alleges that the FBI and the Justice Department improperly used government surveillance during the investigation into Russian election interference and contacts with President Donald Trump's campaign.

The vote to release the memo comes after committee Republicans, led by chairman Rep. Devin Nunes, a California Republican, pushed for its disclosure. The memo addresses a dossier of allegations against Trump compiled by a former British spy, and questions over whether it was used to obtain surveillance warrants.

The White House says President Donald Trump has not decided whether he'd authorize the release of a classified House Intelligence Committee memo, but says he favors "full transparency."

The House committee may vote as soon as Monday to release the memo that Republicans say alleges FBI misconduct.

White House press secretary Sarah Huckabee Sanders said Monday that "no one" at the White House has seen the memo, so the president was not prepared to make a decision.

A number of conservatives favor releasing the memo, which they believe could discredit the findings of the investigation into ties between the Trump campaign and Russian officials.

White House aides have previously said Trump favored releasing the document, which is in contrast to the stance of the Justice Department.

Two Republican senators say President Donald Trump would be wise to keep a public silence on an independent investigation into his 2016 campaign's contacts with Russia.

That's in the wake of news reports that he sought to fire the special counsel.

Graham, co-sponsor of legislation that would protect Mueller from being fired without a legal basis, said he would be "glad to pass it tomorrow." But he insisted that Mueller's job appeared to be in no immediate danger, pointing to the political costs if Trump did remove him.