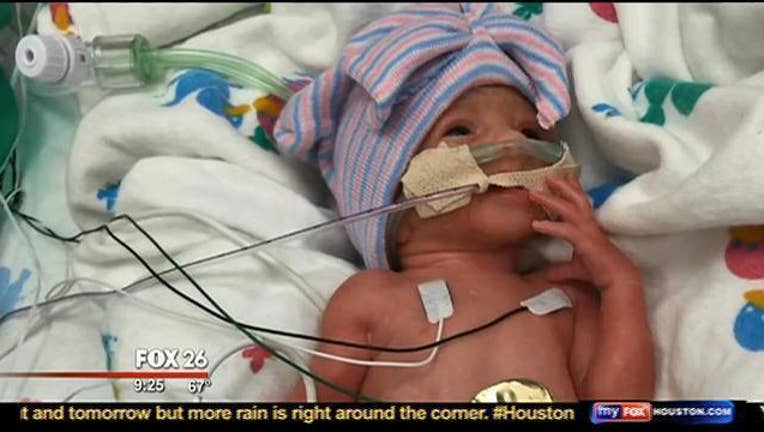 "I guess we can go one by one," he said in a video posted to the blog he shares with his wife (www.itsabuzzworld.com).

"Blayke got to come meet them, which was so cute," Danielle said in the video blog. "She had her big sister shirt on."

Adam has seven girls, including Danielle. Like a lot of young couples, the Busby's had trouble conceiving. According to their blog, they used fertility drugs with a procedure called IUI (Intrauterine insemination) and had Blayke. They waited a few years, tried again, and last week Danielle delivered five tiny baby girls in just four minutes at The Woman's Hospital of Texas in Houston.

"Danielle is a trooper, and her positive attitude definitely shined through the pregnancy and the delivery," said Dr. Alexander Reiter, Maternal-Fetal Medicine Specialist with Houston Perinatal Associates. Dr. Reiter delivered the quintuplets with help from more than a dozen other medical personnel. Additionally, seven board-certified neonatologists were among the five medical teams assembled to provide care after the babies' arrival.

"The baby girls did well during the delivery and are currently requiring only modest support of their breathing," explained Dr. Finkowski-Rivera. "They were all in the appropriate weight range (between 2 pounds and 2 pounds, 6 ounces) for their gestational age, which is due to their mother's excellent efforts to have the healthiest pregnancy possible. They have made a strong start in life, and we are excited to watch them grow and mature."

The Busby's are grateful, but still a little nervous.

"I'll be going back to work so we've got a lot of changes coming up in the next few days," Adam Busby said. "A lot of adjustments to get used to, figure out what our new norm is going to be."