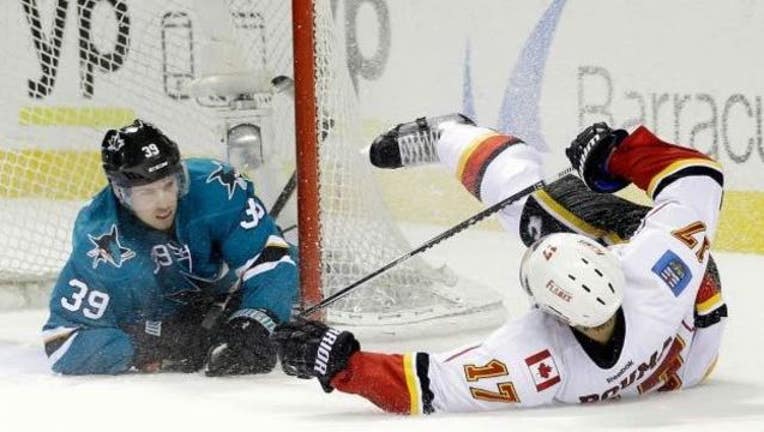 SAN JOSE, Calif. (AP) -- Jiri Hudler scored his fifth goal of the season against San Jose to help the Calgary Flames win for the fourth time in five games, 4-1 over the Sharks on Monday night.

Mason Raymond, Lance Bouma and David Jones also scored for the Flames, who won four of five meetings this season against San Jose to move ahead of the Sharks into second place in the Pacific Division. Jonas Hiller made 33 saves.

Brent Burns scored the lone goal for the Sharks but also committed the penalty that led to Hudler's power-play goal in the third period that helped seal the game for the Flames. Antti Niemi made 22 saves for the Sharks, who have lost four of five.

After giving the Sharks some momentum with his goal in the final second of the second period, Burns helped turn the game back toward the Flames when he was called for roughing early in the third.

Late on the power play after Andrew Desjardins and Scott Hannan failed to clear the puck, Johnny Gaudreau fed Hudler in the slot for the goal that made it 3-1. Hudler became the first player since Corey Perry in 2010-11 to score five times against the Sharks in one season.

Jones added an empty-net goal as Calgary maintained its perfect record when leading after two periods. The Flames are 14-0-0 in those situations, including three wins against San Jose.

The Sharks fell behind 2-0 midway through the second when Bouma beat Mirco Mueller to the rebound of Mark Giordano's shot and backhanded it past Niemi.

The Flames had chances to add to the lead but Matt Tennyson broke up a pair of odd-man rushes, and then the Sharks finally got on the board in the final second of the period.

Joe Pavelski beat Sean Monahan on an offensive zone faceoff with 3.1 seconds to play. Logan Couture got the puck back to the point to Burns, who beat Hiller to make it 2-1 with 0.9 seconds to play.

The Flames controlled the play in the first period and scored first for the fifth time in as many meetings against the Sharks this season.

After the Sharks took more than 1 minute to touch the puck on a delayed penalty and killed off the 2-minute infraction, Calgary got on the board when Raymond skated into the offensive zone and found an opening in the high slot to beat Niemi with a wrist shot.

NOTES: Sharks F Tommy Wingels returned for the first time since breaking his left hand Jan. 19. ... F Curtis Glencross returned for the Flames after missing nine games with a hip injury. ... Flames F Paul Byron was scratched with an illness, and F David Wolf (leg) was activated from the injured list to take his place in the lineup. ... Sharks D Marc Edouard-Vlasic missed his second game with an upper-body injury. He is eligible to return Friday in Arizona.