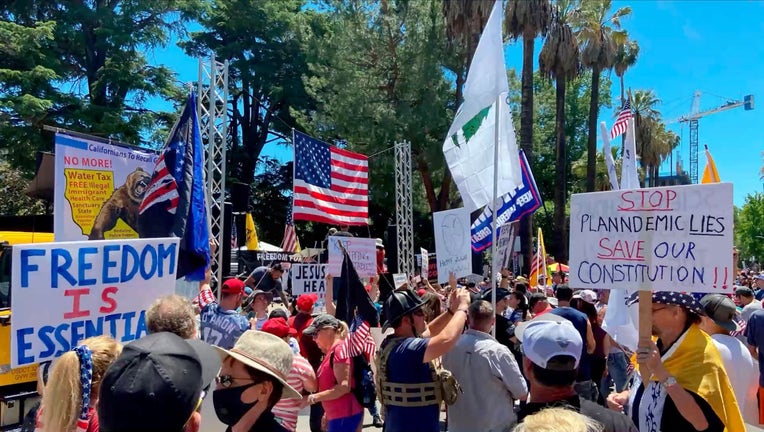 SACRAMENTO, Calif. - Hundreds of protesters rallied outside the state Capitol on Saturday to protest against California's stay-at-home orders even as residents entered the Memorial Day weekend with newly expanded options for beachgoing, barbecuing and shopping.

The rally to demand that Gov. Gavin Newsom lift his restrictions on business, religious gatherings and other activities took on the atmosphere of a political rally and festival on a closed-off street.

California Highway Patrol officers closed the Capitol lawn to demonstrators, so speakers addressed the crowd from the back of a flatbed truck as an airplane flew above towing a banner with a picture of Newsom and the words “End his tyranny!” Protesters waved dozens of flags and signs, many in support of President Donald Trump.

Few people wore masks and there was little room for social distancing on the sidewalk or closed-off street.

“The mental and emotional impact cannot even be fathomed,” said Nita Brady, 68, of Modesto, who added that she was angry that two of her granddaughters missed their middle school and high school graduations.

“I think it's absolutely ludicrous to shut down the schools and especially for the length that they did,” she said.

Stay-at-home restrictions eased across much of the state. Some 45 of 58 counties have received permission to reopen most stores — at least for curbside pickups — and many public spaces by meeting state standards for controlling the coronavirus.

Some saw it as a safety test as the state prepared to celebrate its first major holiday weekend since a statewide order in mid-March clamped down on all but essential trips and businesses.

Social distancing practices have been cited as the main reason rates of deaths and hospitalizations have slowed in many counties, and people were urged to keep their masks on and their guard up while enjoying recently reopened bike paths, hiking trails and beaches.

Many Southern California beaches were open only for swimming, running and other activities. Sunbathing and group activities such as volleyball were prohibited.

Police, lifeguards and other officials were warning people to remember the seriousness of the virus as they enjoy their new freedom.

“Don’t go crazy and stay out all weekend. Don’t get as close as you can to as many people,” Los Angeles Mayor Eric Garcetti said. “Don’t go out without a mask. You see people without masks, avoid them.”

“It’s also something that just saves more lives, including, perhaps, your own,” he said.

Los Angeles County, the state’s largest with 10 million people, has been hardest-hit by COVID-19, with more than 44,000 cases and nearly 2,100 deaths. However, hospitalization and increased testing, which allows for quicker identification, treatment and isolation of people who tested positive for COVID-19 and their close contacts, helped slow the spread of infections, health officials said Saturday.

The county reopened beach bike paths and some beach parking lots. Dozens of counties also got the go-ahead to allow some restaurants, which have survived on deliveries and takeout orders, to reopen limited seating.

The state is still seeing troubling COVID-19 flare-ups, however. Imperial County, across the border from Mexico, has seen a surge. In Northern California, Santa Cruz County’s public health officials were investigating four separate clusters of COVID-19 cases involving family gatherings, including a multi-generational Mother’s Day party and a large gathering involving individuals who traveled from out-of-state.

Avoiding temptation might be difficult, however, with temperatures heating up over the weekend, reaching into the 90s and even 100 degrees (38 Celsius) in some inland valleys by Sunday.

Traffic started to back up as drivers searched for parking along Huntington Beach and there were plenty of beachgoers lingering on the sand.

In San Francisco, officials drew large chalk “social distancing” circles on the grass at parks to show people where to sit. Dolores Park has seen large masses of people on sunny weekends, prompting Mayor London Breed to warn that she would shut it down if people weren’t more responsible.

But South Lake Tahoe in the northern Sierra Nevada and Mammoth Lakes in the Eastern Sierra urged non-residents to stay away, concerned that swarms of tourists might spur more COVID-19 cases and overwhelm their medical systems.

“We would love nothing more than to welcome everyone to Tahoe right now, but that’s not the safest way to bring people back,” City Manager Joe Irvin said in a statement. “We need to be responsible and make sure we are doing our part to keep our neighbors safe and Tahoe safe.”

The Santa Cruz County Sheriff’s Office warned that its beaches would be closed except for a few hours in the morning and strongly discouraged tourism from the San Francisco Bay Area, Central Valley and Sacramento areas.

North of San Francisco, Humboldt County, home to several parks with majestic redwood trees, was open for residents only. The county was among the first in the state to get the governor's green light to open up restaurants and stores, but took a more cautious approach to reopening when it saw a surge of new cases and the first two deaths.

“Do not travel into our county,” Sheriff William Honsal said in a video Thursday. “People want to come here, find relief because the temperatures are rising in the valley, coming to the coast, coming to the beach. We ask those people that are from another county to please stay in your county.”