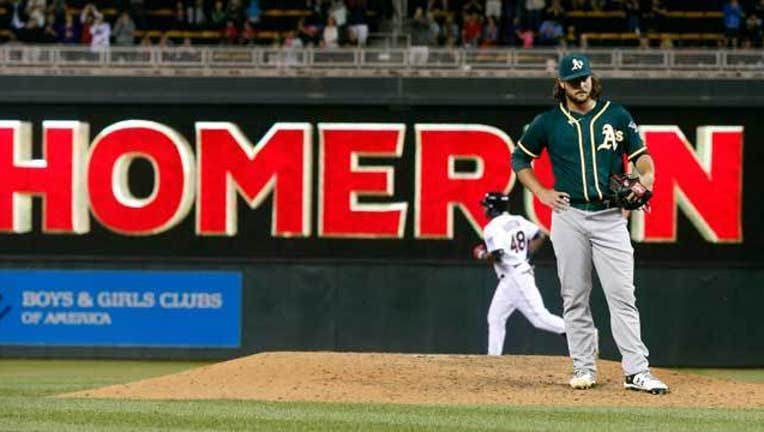 Hughes (1-4) gave up a grand slam to Stephen Vogt five batters into the game and a solo shot to Mark Canha in the sixth, but the right-hander was good enough in between to finally get that first victory in his sixth start of the season.

Vogt added an RBI double in the ninth inning, but Glen Perkins recovered to earn his ninth save in as many attempts.

The A's, off to their worst start in six years, lost for the eighth time in 11 games. They're already 7 1/2 games behind first-place Houston in the AL West.

Jesse Hahn (1-2) quickly lost the 4-0 lead the A's handed him in the first inning and failed to finish the sixth for the fourth straight start.

Hughes was the main attraction on Star Wars night, his turn happening to fall on May 4, which has become the annual celebration of the sci-fi classic in honor of the famous line, "May the force be with you." Bobblehead dolls in the likeness of Hughes, holding a light saber in one hand and a baseball in the other, were handed out to select customers. The theme, cleverly, was "Hughes the force," as music from the movie played throughout pregame introductions.

The pitches Hughes threw early had little force, including the fastball he grooved to Vogt, who homered twice on Sunday and has nine RBIs in his last two games. But the right-hander settled in after that, finding a rhythm until Canha sent a fastball into the second deck above left field to give the A's a 5-4 lead.

The Twins roared right back, though, with an RBI single by Schafer before the big hit by Hunter.

Canha drove in another run with a groundout in the eighth, but Schafer ended the inning with a tumbling catch near his shoe of a sinking line drive by Billy Burns.

Hahn was the fifth A's starter in the last nine games to finish only five innings or fewer. He gave up 10 hits and six runs while striking out five.

Athletics: RHP Jarrod Parker struck out four while allowing three runs in 4 1-3 innings for Triple-A Nashville in a rehab start on Sunday, moving one step closer to rejoining the rotation following Tommy John surgery that kept him out last season.

Minnesota: LF Oswaldo Arcia (right hip) was placed on the DL before the game. OF Eddie Rosario was promoted from Triple-A Rochester.

Jesse Chavez (0-2, 2.55 ERA) will take his third turn in Oakland's rotation since moving from the bullpen. Chavez's only career start against Minnesota came at Target Field last April, a seven-inning, one-run, nine-strikeout performance.

Trevor May (2-1, 4.43) will take the mound for the Twins, who have won each of his last three turns. May made his major league debut against the A's last August, allowing four runs on three hits and seven walks while finishing only two innings.