Florida Gov. Ron Desantis updated the situation on Tuesday telling residents in evacuation zones to leave immediately. As many as 8,000 people have lost power as Hurricane Ian prepares to land with Category 4 force on Wednesday.

Images from Broward County in southern Florida showed branches ripped from tree trunks, crashing onto cars due to a potential tornado.

"If you are in an evacuation zone particularly in those southwest Florida counties, your time to evacuate is coming to an end. You need to evacuated now," said DeSantis, "There will be catastrophic flooding and life-threatening storm surge in the Gulf Coast region."

There is also concern about the hurricane spawning tornadoes.

"Tropical tornadoes will occur very quickly. They will happen overnight tonight and will occur during heavy rain. You will not be able to see them coming,," said Kevin Guthrie, Director of the Florida Division of Emergency Management.

Late Tuesday night, video from the North Perry Airport in Hollywood, Florida near Fort Lauderdale shows more than 15 planes damaged by suspected tornado.  Several aircraft were flipped over, others had wings twisted.

Passengers scrambled Tuesday to get flights out of Florida.

"It's a little nerve-wracking because everybody is trying to get out," said Adrian Adams, a passenger who was trying to catch a flight home to Indiana.

One man named Anthony arrived in San Francisco and said he rushed to leave Florida, worried he'd be stuck and miss his son's wedding in Napa.

Walt Disney World announced it is close theme parks on Wednesday, and Thursday,

Concern is mounting that the storm could cause major power outages for millions of customers in Florida.

As monster storm, Hurricane Ian, stalks the Sunshine State, many government agencies, healthcare professionals, foundations and companies in California are waiting to see if they will be needed. As each minute passes, Hurricane Ian draws enormous power from the warm sea.

In Hurricane Ian's path are more than 5 million coastal Floridians in the 250 miles from Key West to the Tampa Bay metroplex; one of the nation's longest, low level elevations. "In this scenario, we're talking about the potential of a 6 to a 10-foot wall of water potentially going a mile inland," said Mark Neveau, an emergency response expert.

Under a Presidential Emergency Disaster, FEMA is sent in to coordinate any and all needs the state might have beyond its own resources. And so, that brought in a specific type one incident Management Team. There's only three of them in the country," said Neveau.

FEMA calls in whatever expertise it can.

"There are 28 FEMA Task Forces throughout the United States. There are eight in the state of California. We are one of them," said Menlo Park Fire District Chief Mark Lorenzen.

As Hurricane Ian stalks Florida many government agencies, healthcare professionals, foundations and companies in California are waiting to see if they will needed.

Not yet called up, Menlo Park's 90-member Task Force draws from 16 fire agencies from San Francisco to the South Bay. "We are up and ready to go based on what the impacts are from the hurricane. Deployment is dependent on FEMA's decisions," said the Chief.

If summoned, the 90-person team, within four to six hours, would fly on military aircraft, likely from Travis Air Force Base which told us it's on standby mode. Also, not called up yet, Pacific Gas and Electric's mutual aid crews, some already deployed to Puerto Rico's power restoration.

For Floridians, such as Tim Tullis, who lives just south of Tampa, it's wait and watch and worry about this. "Winds of 90 miles an hour or more; gusts up to 125. Rainfall ranging 7 to 15 inches," said Sarasota-Bradenton resident.

What's not going on at the lake behind his home is ominous. "Beautiful tropical birds mostly, and it's usually very busy all during the daylight hours. It is now totally devoid of any wildlife," said Tullis. 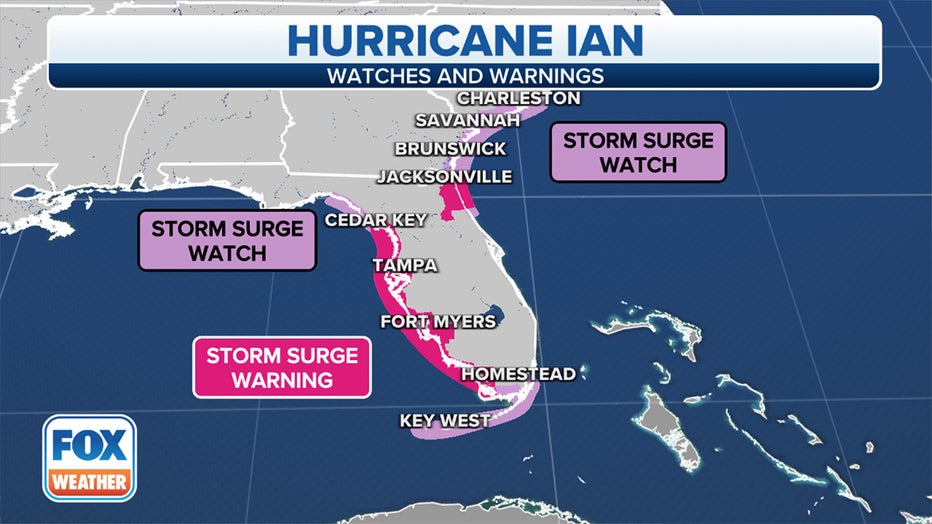 Storm Surge Watches and Warnings are in effect along the path of Hurricane Ian. (FOX Weather)