FORT MYERS, Fla. - A revived Hurricane Ian set its sights on South Carolina's coast Friday and the historic city of Charleston, with forecasters predicting a storm surge and floods after the megastorm caused catastrophic damage in Florida and left people trapped in their homes.

With all of South Carolina’s coast under a hurricane warning, a steady stream of vehicles left Charleston on Thursday, many likely heeding officials’ warnings to seek higher ground. Storefronts were sandbagged to ward off high water levels in an area prone to inundation.

The hurricane warning stretched from the Savannah River to Cape Fear, with flooding likely across the Carolinas and southwestern Virginia, the center said. The forecast predicted a storm surge of up to 7 feet (2.1 meters) into coastal areas of the Carolinas, and rainfall of up to 8 inches (20 centimeters).

Hours after weakening to a tropical storm while crossing the Florida peninsula, Ian regained hurricane strength Thursday evening over the Atlantic. The National Hurricane Center predicted it would hit South Carolina as a Category 1 hurricane Friday.

National Guard troops were being positioned in South Carolina to help with the aftermath, including any water rescues.

Visiting the state’s emergency operations center Thursday, Cooper said that up to 7 inches (17.8 centimeters) of rain could fall in some areas, with the potential for mountain landslides and tornadoes statewide.

In Florida, rescue crews piloted boats and waded through riverine streets Thursday to save thousands of Floridians trapped amid flooded homes and buildings shattered by Hurricane Ian.

The storm left a path of destruction in southwest Florida, knocking out power to 2.67 million people and killing four people overall after an official said late Thursday that two people were confirmed dead on a hard-hit barrier island on Florida’s western coast.  Three other people were reported killed in Cuba after the hurricane struck there on Tuesday.

In the Fort Myers area, the hurricane ripped homes from their slabs and deposited them among shredded wreckage. Businesses near the beach were completely razed, leaving twisted debris. Broken docks floated at odd angles beside damaged boats. Fires smoldered on lots where houses once stood.

Dana Souza, city manager of Sanibel, Florida, said the deaths were confirmed by fire officials but offered no other specifics. A local medical examiner’s office said it could not comment and any details on deaths would have to come from the sheriff’s office.

In addition to the two Sanibel residents, a 38-year-old man from Lake County died Wednesday in a motor vehicle accident after his vehicle hydroplaned, according to the Florida Department of Law Enforcement. Medical examiners determined that his death was storm-related.

A 72-year-old man from Deltona also was confirmed dead on Thursday. Officials with the Volusia County sheriff’s office said the man went outside to drain his pool and fell into a canal. He was later found dead.

Lee County Sheriff Carmine Marceno told "Good Morning America" live on Thursday morning that he believed the death toll would be "in the hundreds," but later clarified that he couldn't immediately confirm the true number. Gov. Ron DeSantis later emphasized that the toll was not confirmed and was likely an estimate based on 911 calls.

Marceno also said his office was receiving thousands of 911 calls from people needing rescue in Lee County that includes Fort Myers, but roadways were still impassable, and bridges are compromised.

"It crushed us," Marceno said. "We still cannot access many of the people that are in need."

President Joe Biden said the storm could end up as the "deadliest hurricane in Florida’s history."

"We know many families are hurting," Biden said at FEMA's National Response Coordination Center, where teams of specialists from across the federal government and partner organizations were monitoring the storm and assisting in recovery efforts. "Our entire country hurts with them.'

Fort Myers Mayor Kevin Anderson told NBC’s "Today" that he had not been told of any deaths in the city. He said Ian by far was the worst storm he has witnessed since he first came to the area in the 1970s.

Boats destroyed by winds and surge in Fort Myers

FOX Weather's Robert Ray checks on damage at one of the marinas in Fort Myers, near where Hurricane Ian made landfall.

"Watching the water from my condo in the heart of downtown, watching that water rise and just flood out all the stores on the first floor, it was heartbreaking," Anderson said.

Hurricane Ian slammed into southwest Florida on Wednesday with 150 mph winds, pushing a wall of storm surge that turned streets into rivers. Ian’s strength at landfall was Category 4, tying it for the fifth-strongest hurricane, when measured by wind speed, ever to strike the U.S.

A chunk of the Sanibel Causeway fell into the sea, cutting off access to the barrier island where 6,300 people normally live. How many heeded mandatory evacuation orders before the storm surge washed over the island was impossible to know. 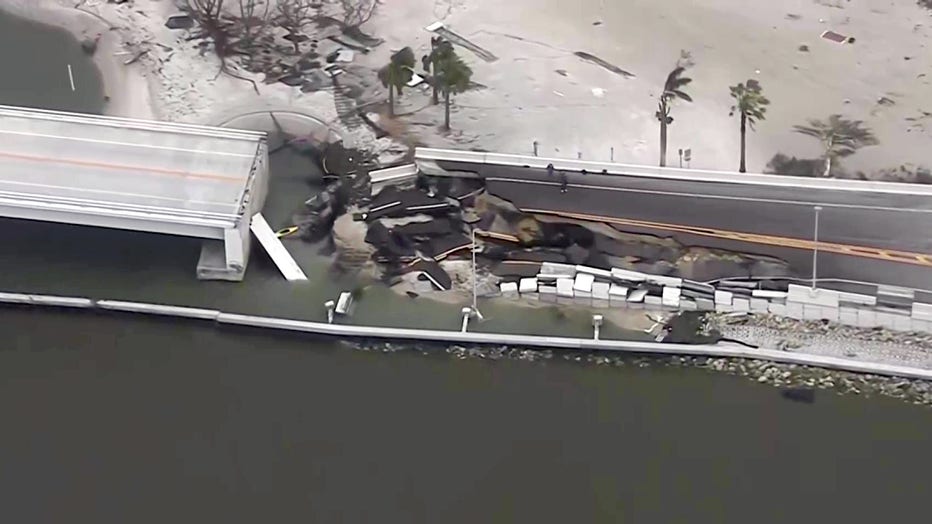 Damage to the Sanibel causeway, seen from the air (WFOR image via FOX)

Emergency crews sawed through toppled trees to reach people in flooded homes, but with no electricity and virtually no cell service, it was impossible for many people to call for help from the hardest hit coastal areas where the surge came in.

"Portable towers are on the way for cell service. Chances are your loved ones do not have ability to contact you," said the sheriff's office in Collier County, which includes Naples. "We can tell you as daylight reveals the aftermath, it’s going to be a hard day."

A blown down street sign is seen as the eye of Hurricane Ian passes by in Punta Gorda, Florida on September 28, 2022. - (Photo by RICARDO ARDUENGO/AFP via Getty Images)

The Florida Highway Patrol shut down the Florida Turnpike in the Orlando area due to significant flooding and said the main artery in the middle of the state will remain closed until water subsides.

Biden declared a major disaster in parts of Florida early Thursday at DeSantis' request, freeing up additional federal assistance to state and local governments and individuals. FEMA Administrator Deanne Criswell said more counties would likely be added to the disaster declaration as assessments were carried out.

Even the rescuers needed help in Sarasota on Thursday. SkyFOX spotted several stranded vehicles in Sarasota, including this National Guard truck being pushed by seven guardsmen.

"The Coast Guard had people who were in their attics and got saved off their rooftops," DeSantis said. "We’ve never seen storm surge of this magnitude ... The amount of water that’s been rising, and will likely continue to rise today even as the storm is passing, is basically a 500-year flooding event."

Hurricane Ian: How you can help victims and avoid scams