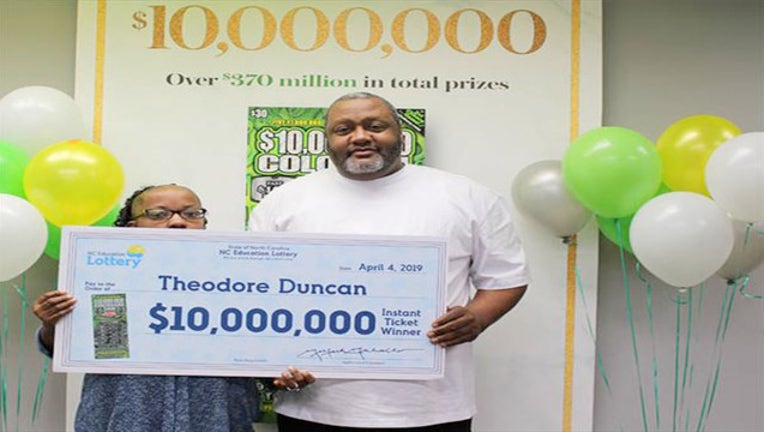 (FOX 46 CHARLOTTE) - Theodore Duncan of Oxford, North Carolina plans to retire and get his dream house after he won a $10 million lottery prize, officials with the NC Education Lottery said.

“I’m 52, and now that I’ve won this, I can finally stop working,” said Duncan, a machine mechanic. “I’m going to retire and get a brand new three-bedroom house with a big pool. I’m also going to use some of the money to spoil my 12 grandkids.”

Duncan’s good fortune happened Monday, April 1 when he stopped by the Berea Mini Mart on U.S. 158 West in Oxford on his way home from the landfill.

“When I saw the money symbol I knew I won something,” Duncan said. “When I scratched off the prize I couldn’t believe it. I was so shocked I couldn’t drive. I had to call my brother to come get me.”

Duncan celebrated his prize Thursday at lottery headquarters in Raleigh. He had the option of taking a $10 million annuity that has 20 payments of $500,000 a year or a lump sum of $6 million. He chose the lump sum and, after required state and federal tax withholdings, he took home $4,245,009.

According to the lottery, Duncan plans to also donate a portion of his winnings to St. Jude Children’s Research Hospital. “I always told people that one day I’d hit the lottery,” Duncan said when he got the check. “Today’s that day. It feels so good.”