The president read from handwritten notes when speaking to reporters on the White House lawn nearly an hour later than his scheduled departure for Texas.

WASHINGTON - President Donald Trump insisted Wednesday that he wanted “nothing” from Ukraine and declared that impeachment hearings should be brought to an end.

The president read from handwritten notes when speaking to reporters on the White House lawn nearly an hour later than his scheduled departure for Texas.

Photos showed the notes, written largely on a notepad with black marker: “I want no quid pro quo” and “I want nothing.” 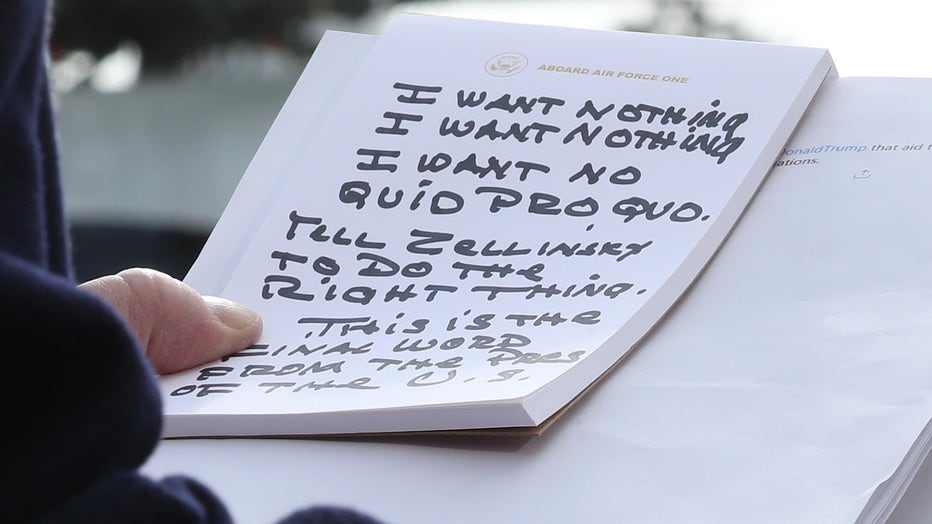 Large, handwritten talking points are shown in black marker on a notepad President Donald Trump used when he addressed the press in front of the White House on Nov. 20, 2019. (Photo by Mark Wilson/Getty Images)

Trump addressed the testimony from Gordon Sondland, ambassador to the European Union, who linked the president to a decision to withhold military aid from Ukraine in exchange for an investigation into a political rival.

But he only highlighted specific, helpful parts from Sondland’s remarks, saying “it is the final word” that he did not demand a quid pro quo.

Trump, who claimed that means “it’s all over” for the impeachment proceedings, did not take questions from reporters.