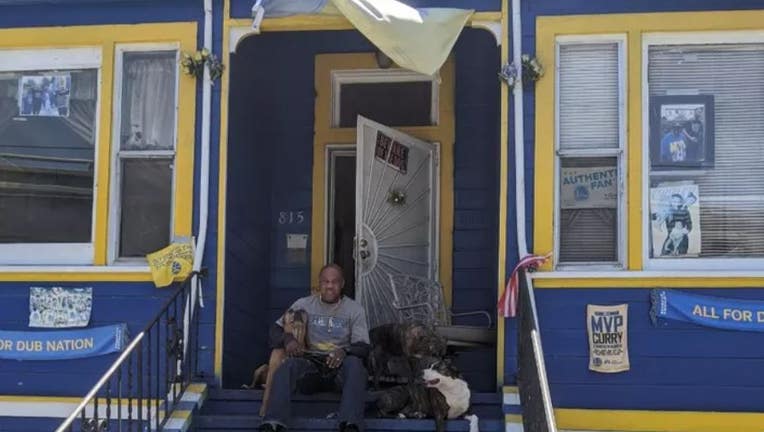 Lloyd Canamore’s connection to his home on 35th Street in West Oakland runs a half a century deep, and so does his connection to the Golden State Warriors. Photo credit: GoFundMe post.

OAKLAND, Calif. - The owner of the iconic Warriors house in West Oakland is in jeopardy of losing his home again.

Lloyd Canamore’s home on 35th Street has been painted Golden State Warriors blue and yellow and plastered with team flags for years. It can be seen off Interstate 580 and is even a tourist attraction of sorts.

The home drew attention in 2020 when Steph Curry shared a GoFundMe on Instagram to save it from being taken by the bank. They raised $287,230 on the account with donations from all over the Bay Area.

Two years later, Canamore is at risk of losing his home again.

GoFundMe organizer Ali Roth said a donor associated with the Warriors told them they would take care of everything but the donation fell through. She said a few things derailed the plan, including the amount required for maintaining the home.

"The house needs a considerable amount of work," said Roth. "Some estimates that have been conducted have said that the house would need hundreds of thousands of dollars in order for an outside organization to become involved without worrying about the liability."

Instead, Roth said they are looking at other ways of saving the home, which would require additional donations.

"In the event none of these happen, our goal is to make sure Lloyd and his dogs are safe," said Roth. "If anyone knows someone who would be willing to sell a house to Lloyd for $300k in Oakland, he could create a Warriors House 2.0, but I realize this is a big ask."

Canamore's love for the Warriors, and his home, runs decades deep.

"When I was in tenth grade I worked at the Coliseum (and) I was selling hot dogs and peanuts there," Canamore says, recalling when he became a fan of the team.

The seed planted many years ago as a child grew into an outsized fandom expressed in every inch of his home.