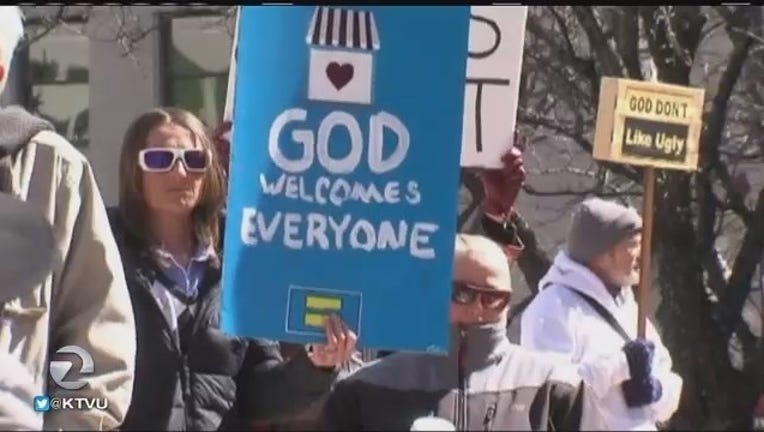 LITTLE ROCK, Ark. (AP) — Lawmakers in Arkansas and Indiana passed legislation Thursday that they hoped would quiet the national uproar over new religious objections laws that opponents say are designed to offer a legal defense for anti-gay discrimination.

The Arkansas House voted 76-17 to adopt a revised bill after Republican Gov. Asa Hutchinson asked for changes in the wake of mounting criticism. Hutchinson signed it only moments after the vote, saying the new version recognizes that "we have a diverse workforce and a diverse culture."

A parallel process played out at the Indiana Capitol as the House and Senate passed changes to a law signed last week by GOP Gov. Mike Pence, who quickly approved the revisions.

"Over the past week, this law has become a subject of great misunderstanding and controversy across our state and nation," Pence said in a statement. "However we got here, we are where we are, and it is important that our state take action to address the concerns that have been raised and move forward."

The new legislation marks the first time sexual orientation and gender identity have been mentioned in Indiana law.

The Arkansas measure is similar to a bill sent to the governor earlier this week, but Hutchinson said he wanted it revised to more closely mirror a 1993 federal law.

The measure exempts churches and affiliated schools, along with nonprofit religious organizations.

Business leaders, many of whom had opposed the law or canceled travel to the state because of it, called the amendment a good first step but said more work needs to be done. Gay-rights groups noted that Indiana's civil-rights law still does not include LGBT people as a protected class.

"The healing needs to begin right now," he said.

Democratic leaders said the amendment did not go far enough and repeated their calls to repeal the law.

"I want to hear somebody say we made a grave mistake, and we caused the state tremendous embarrassment that will take months, if not years, to repair," House Minority Leader Scott Pelath said.

The lawmaker behind the original Arkansas proposal backed the changes, saying he believed the law would still protect religious beliefs.

"We're going to allow a person to believe what they want to believe without the state coming in and burdening that unless they've got a good reason to do so," Republican Rep. Bob Ballinger told the House Judiciary Committee.

Like Pence, Hutchinson faced pressure from the state's largest employers, including retail giant Wal-Mart. Businesses said the bill would hurt Arkansas' image. Hutchinson noted that his own son had signed a petition urging him to veto the bill.

Wal-Mart on Thursday applauded the compromise.

"We hope today's action marks a significant step toward achieving a greater understanding of the need to protect the rights of all Arkansans," the company said in a statement.

After Hutchinson signed the compromise bill, the House voted to recall the original proposal from his desk. Conservative groups said they would have preferred Hutchinson sign the first bill, but they grudgingly backed the revamped measure.

"The bill that's on the governor's desk is the Rolls Royce of religious freedom bills. It is a very good bill," said Jerry Cox, head of the Arkansas Family Council. "The bill that just passed ... is a Cadillac."

The revised Arkansas measure only addresses actions by the government, not by businesses or individuals. Supporters said that would prevent businesses from using it to deny services to individuals. Opponents said they believed the measure still needs explicit anti-discrimination language.

The original bill "gave us a black eye. This bill ices it," said Rita Sklar, executive director of the American Civil Liberties Union of Arkansas. "We still need some Tylenol."

The Human Rights Campaign, the nation's largest lesbian, gay, bisexual and transgender rights group, called the new law an improvement but said it could still be used be used to discriminate based on sexual orientation.

The revised bill also faced opposition from Republicans frustrated over the governor's request for changes to a proposal he had initially planned to sign.

"I, for one, do not appreciate someone hiding behind this body when they're unwilling to take a stand one way or the other," Republican Rep. Josh Miller of Heber Springs said.

Similar proposals have been introduced this year in more than a dozen states, patterned after the federal Religious Freedom Restoration Act of 1993, with some differences. Twenty-one states now have comparable laws on the books, including Indiana and Arkansas.

The backlash gave pause to lawmakers in other states considering their own religious freedom proposals.

A divisive bill in Georgia stalled Thursday as the end of the 2015 session approached. Atlanta-based Coca-Cola warned lawmakers against approving "any legislation that discriminates."

In North Carolina, the House speaker said deliberations over a bill would be slowed to give lawmakers time to determine if the legislation would harm the state's economy.

A proposed amendment to the Texas Constitution would prohibit the government or any other entity from imposing burdens on religious freedom, potentially opening the door for businesses to refuse to serve gay people on religious grounds.