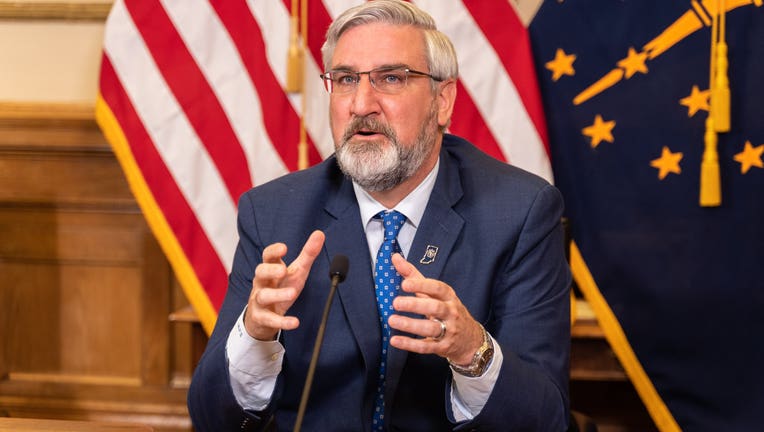 Republican Gov. Eric Holcomb said in a speech from his Statehouse office that the state's steep declines in coronavirus hospitalization and deaths rates along with the growing number of people fully vaccinated justify the steps starting April 6.

Holcomb said he hoped the state was seeing the "tail end of this pandemic" that has killed nearly 13,000 people in the state over the past year.

The date for ending the mask mandate was picked to coincide with the ending of the NCAA men's basketball tournament now being held in Indianapolis and to allow more time for people with at-risk health conditions to get vaccine shots, Holcomb said.

Local officials would still have the authority to impose tougher restrictions in response to COVID-19 cases in their communities and face mask use would still be required in K-12 schools for rest of this school year, Holcomb said.

He urged residents to continue wearing masks in public and that bars and restaurants continue to space out their tables.

While Holcomb has faced public pressure and from conservative state lawmakers to ease restrictions, especially after governors in Texas and other states have done so recently, he didn't make any bold victory announcements and asked residents to respect rules adopted by businesses and others.

"Whether that is a bank branch lobby, on the factory floor or a county courthouse or city hall, they retain the authority to make decisions about COVID restrictions for their operations and should be afforded the respect, compliance and understanding of all who visit them," Holcomb said. "When I visit my favorite restaurants or conduct a public event, I will continue to appropriately wear a mask, it's the right thing to do."

But some health experts worry it is premature to lift the statewide restrictions, pointing to the steep increase in hospitalizations and deaths the state saw beginning in September after the governor lifted most business restrictions before reinstating crowd limits several weeks later.

"We put a lot of restrictions in place last year, there was some initial hesitation by some parts of the population to comply with some of those orders," said Brian Dixon, an epidemiologist at Indiana University's Fairbanks School of Public Health. "And then what we saw in the fall is that rates went up, they skyrocketed because people were not following precautions."

Holcomb said the state would open up vaccine eligibility for all residents 16 and older starting March 31 and that additional mass vaccination clinics were being planned for April.

The governor's public health emergency for the state will remain in place through April, which Holcomb said would allow state officials to take quick action if needed and gives the state access to hundreds of millions of dollars in federal funding.
------
Associated Press writer Casey Smith contributed to this report.