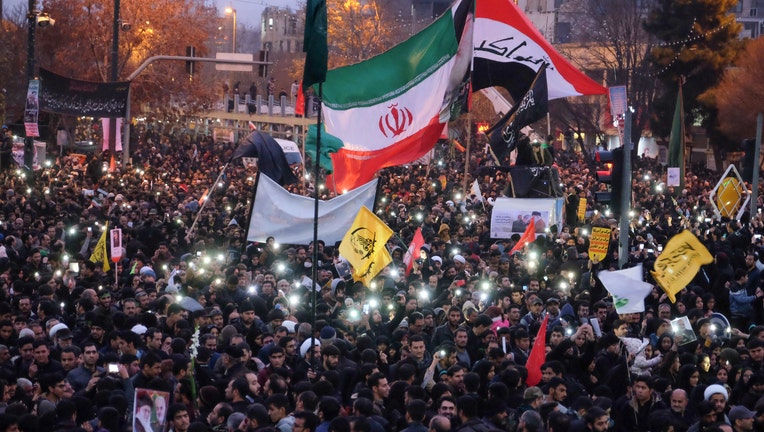 Iranians gather in the northeastern city of Mashhad on January 5, 2020 to pay homage to top general Qasem Soleimani and others after they were killed in a US strike in Baghdad. - Iran has cancelled a Tehran ceremony to honour slain general Qasem Sole

TEHRAN, Iran - Iran’s state television reported that the country will no longer abide by any of the limits of its 2015 nuclear deal.

The announcement came Sunday night after another Iranian official said it would consider taking even-harsher steps over the U.S. killing of Iranian Gen. Qassem Soleimani on Friday in Baghdad. State TV cited a statement by Iranian President Hassan Rouhani’s administration saying the country will not observe limitations on its enrichment, the amount of stockpiled enriched uranium as well as research and development in its nuclear activities.

It did not elaborate on what levels it would immediately reach in its program.

The International Atomic Energy Agency, the United Nations watchdog observing Iran’s program, could not be immediately reach for comment.

Hundreds of thousands flooded streets Sunday in Iran to walk alongside a casket carrying the remains of Soleimani; a slaying one Iranian official suggested would see Tehran break further out of its unraveling nuclear deal with world powers.

Demonstrators rally, march in LA calling for US pullout in Middle East

Mourners beat their chests, wept and cried out carrying posters bearing the image of Soleimani, the leader of its expeditionary Quds Force that organizes Tehran’s proxy forces in the wider Mideast.

The leader of one such proxy, Lebanon’s Hezbollah, said Soleimani’s killing made U.S. military bases, warships and service members spread across the region fair targets for attacks. A former Revolutionary Guard leader suggested the Israeli city of Haifa and “centers” like Tel Aviv could be targeted.

Meanwhile, Iraq’s parliament voted in favor of a resolution calling for an end of the foreign military presence in their nation, an effort aimed at expelling the 5,000 U.S. troops stationed there over the war against the Islamic State group.

Soleimani’s killing Friday escalated the crisis between Tehran and Washington after months of trading attacks and threats that have put the wider Middle East on edge. The conflict is rooted in Trump pulling out of Iran’s atomic accord and imposing sanctions that have crippled Iran’s economy.

Iran has promised “harsh revenge” for the U.S. attack, which shocked Iranians across all political lines. Many saw Soleimani as a pillar of the Islamic Republic at a moment when it is beset by U.S. sanctions and recent anti-government protests.

Retaliation for Soleimani could potentially come through the proxy forces which he oversaw as the head of an elite unit within the paramilitary Revolutionary Guard. Soleimani’s longtime deputy Esmail Ghaani already has taken over as the Quds Force’s commander.

The U.S. Embassy in Saudi Arabia separately warned Americans “of the heightened risk of missile and drone attacks.”

Late Saturday, a series of rockets launched in Baghdad fell inside or near the Green Zone, which houses government offices and foreign embassies, including the U.S. Embassy.

Trump wrote on Twitter afterward that the U.S. had already “targeted 52 Iranian sites (representing the 52 American hostages taken by Iran many years ago), some at a very high level & important to Iran & the Iranian culture.”

Trump did not identify the targets but added that they would be “HIT VERY FAST AND VERY HARD.”