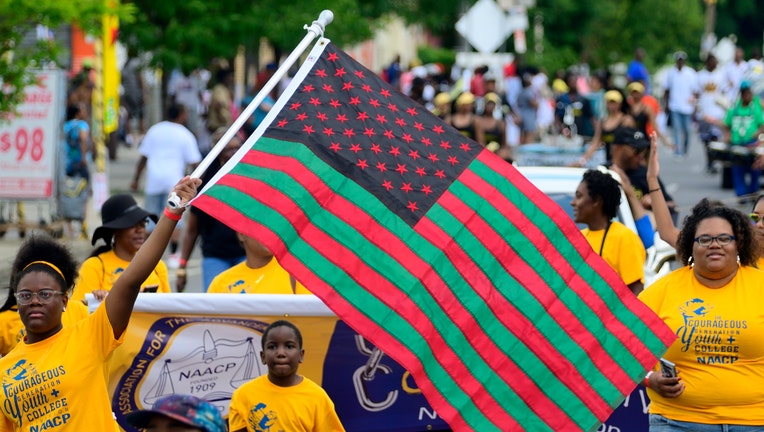 Elected officials, community leaders, youth and drum and marching bands take part in the second annual Juneteenth Parade, in Philadelphia, PA on June 22, 2019 in the week that Juneteenth was declared an official state holiday by Pennsylvania Governor

OAKLAND, Calif. - It seems like everyone is talking about Juneteenth.

Thanks to the Black Lives Matter movement, a presidential campaign rally and a sudden reckoning in corporate America, the so-called Black Independence Day has finally entered the national consciousness.

Last week, in the span of two days, President Donald Trump announced his return to the campaign trail would be on June 19, but he quickly rescheduled after a wave of criticism that he'd chosen Juneteenth for the rally.

The historical significance of the Juneteenth holiday and what it means specifically to the black community may not have been well known to many people. It is the day, celebrated in wider circles than perhaps ever before, that commemorates the end of slavery in the U.S. in the 19th century.

SEE A LIST OF JUNETEENTH EVENTS IN THE BAY AREA

But with a new wave of awareness coming in part from the resurgence of the Black Lives Matter movement and the larger uprisings against police brutality that disproportionately affects black and brown people, Trump may have had no choice but to reschedule.

Critics were quick to point out the decision to hold the Trump rally on Juneteenth was a "slap in the face." Scheduling it in Tulsa, Oklahama, the site of where a racist mob slaughtered hundreds of residents from a thriving black-owned business community in 1921 further rankled critics.

Since the president’s controversy, Twitter and Square CEO Jack Dorsey has declared Juneteenth a company holiday. Target, Lyft, Best Buy, Nike and even the NFL have followed suit. On Wednesady, New York Gov. Andrew Cuomo declared it a state holiday.

Keith Shanklin, president of the International Longshore Warehouse Union Local 24, is noticing other types of corporate manifestations in the sudden wave of demands for social justice, fairness and equality.

“NASCAR, the whitest sport in America, is changing its position,” he said referring to the stock car racing series’ decision to ban the Confederate flag.

He’s part of a group of activists, including the Committee to Stop Police Terror and Systemic Racism, who are organizing a Juneteenth West Coast Port Shutdown on Friday that includes Oakland. The shutdown plans to stop work at all 29 ports on the West Coast for eight hours in commemoration of the holiday.

Birth of the holiday

Juneteenth traces its origins to Texas in 1865 at the end of the Civil War. That's when black Americans there learned that they'd been freed from slavery even though President Abraham Lincoln had issued the Emancipation Proclamation two years earlier.

Barbecue and strawberry soda are staples of Juneteenth celebrations, normally a festive occasion that has seen an ebb and flow in popularity over time. However, this year with the backdrop of a pandemic and civil unrest, things are different.

“Juneteenth is the significance of slavery,” said Shanklin. “Labor is tired of corporate America taking advantage of us, especially using Black labor for its own good. We can’t celebrate until we have action.”

Boasting the ILWU’s might as one of the biggest economic engines on the planet, Shanklin’s group felt with George Floyd’s brutal killing by a white cop, that it was time to use their powerful platform.

“If you have it in your house, if it’s on wheels, if it squeaks, it came from the port. Racism needs to end. We need to vote for people who look like us and act like us and who want to employ us,” he said.

Shanklin expressed concern for not only his own safety, but his nephew’s too. “We have become victims of police brutality because of our skin color. People of color are sick of picking up the paper and reading that another black man has been shot in the back.”

The police brutality in the headlines he refers to has been a daily occurrence, but rather than become desensitized, people have come out from sheltering at home and are taking to the streets in droves.

The president is still holding his rally in Tulsa, but has rescheduled to June 20 out of “respect” for the holiday.

James Taylor, a political science professor at the University of San Francisco, said he thinks the president would possibly have induced violence if he'd carried through with the rally as planned.

“Trump going to Tulsa on Juneteenth is like a Nazi candidate going to Aushwitz. That’s how offensive this is," said Taylor who's the author of Black Nationalism in the United States: From Malcolm X to Barack Obama. "He’s playing when people are completely stressed out about racism and police violence.”

And it isn’t just Juneteenth where Trump was criticized for crossing a line. Echoing many Black leaders, Taylor noted the significance of the Greenwood Massacre in Tulsa. It's been nearly 100 years since ‘Black Wall Street’ was burned to the ground literally with military force from the National Guard, but also by a racist-white mob, deputized by the sheriff.

Fans of HBO’s ‘Watchmen’ recently saw a depiction of these events, creating awareness of something often ignored in history books, but as far as Juneteenth goes, Taylor said, like always, it’s been word of mouth and in the last five or 10 years, social media that has helped bring the tradition to the forefront of a collective consciousness.

“To retain Juneteenth is now more important than ever. As black Baby Boomers die out, we are further removed from Jim Crow. Juneteenth comes from the black bottom, not from black elites. Not [Al] Sharpton, not [Barack] Obama, not the black cultural or politically connected,” Taylor said. “I think it’s more important than Martin Luther King Jr.’s holiday."

Though he’s lauded for being the central figure of the 1960s Civil Rights movement and for preaching non-violence, Taylor notes King’s birthday and monument does not recognize that blacks were slaves.

“Juneteenth is the only recognition that black people were slaves and became free," he said. "Juneteenth reinforces community.”