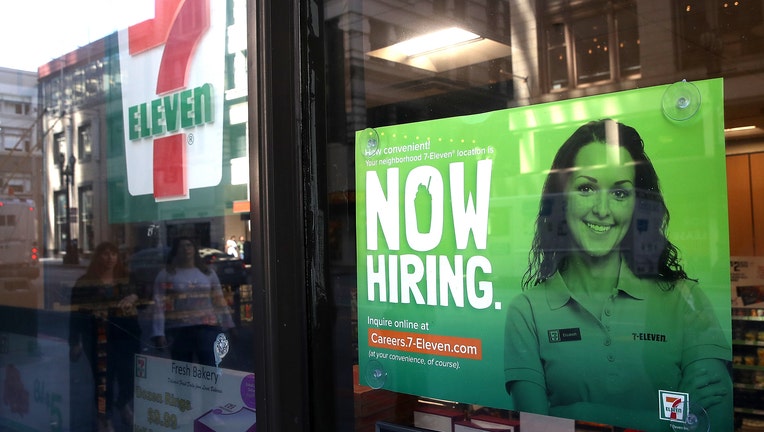 SAN FRANCISCO, CA - JUNE 01: A now hiring sign is posted on the window of a 7-11 store on June 1, 2018 in San Francisco, California. The U.S. Labor Department announced that U.S. employers added 223,000 jobs in May and dropped the unemployment rate t

SACRAMENTO, Calif. - In California, new coronavirus cases are at their lowest point since the start of the pandemic, schools have fully reopened and the more generous unemployment benefits from the federal government have expired — all signs of what should have been a robust economic recovery in September.

Instead, California is now tied with Nevada for the highest unemployment rate in the country at 7.5% after adding just 47,400 new jobs last month.

That number that would have been considered huge before the pandemic but now signals that the state's economic recovery might be slowing down.

Last week, new unemployment claims rose sharply in California to more than 80,700, accounting for 31% of all claims nationally.

California EDD claims are at their highest since April; nearly 1M job openings

While job postings nationally were 19.2% higher than before the pandemic, in California they were just 2% higher, according to Michael Bernick, a former director of the California Employment Development Department who is now a lawyer with the Duane Morris firm.

"Clearly, the state’s job machine has throttled down to a slower speed in September," said Sung Won Sohn, a professor of finance and economics at Loyola Marymount University. "This is not exactly what we want to boast about."

After a setback during a surge of new infection cases and lockdowns in December and January, California had averaged more than 100,000 new jobs per month since February — a relentless pace fueled mostly by new jobs in hotels, restaurants and tourist attractions as coronavirus restrictions were lifted.

But new statistics made public Friday by U.S. Bureau of Labor Statistics showed California's job gains were behind Texas (95,800 jobs) and Florida (84,500 jobs). They are Republican-led states whose leaders have been highly critical of California's pandemic approach, as has California with their approaches.

Desmond Sylva, 39, was so frustrated about not being able to reach the Employment Development Department to find out why he wasn't getting his unemployment check after being laid off from Tesla in Fremont, he hired a bot.

Of the more than 2.1 million jobs lost in California at the start of the pandemic in March and April of 2020, the state has regained just over 1.7 million of them, or 63.5%.

But there were some encouraging sign in the latest unemployment report. The new data also showed that another 30,500 people began looking for work last month, which usually indicates an improving job market.

Since September of last year, California's civilian labor force has increased by more than 627,000 people. But it's still about half a million people fewer than it was before the pandemic.

"Our economic recovery continues to make promising progress, with 812,000 new jobs this year and regaining over 63% of those jobs we lost to the pandemic," said Democratic Gov. Gavin Newsom.

Frustrated by EDD? Here's where you can go for help

California's Employment Development Department has been blasted for withholding payments, using antiquated software and being duped by criminals by the very lawmakers now dedicated to helping fix the myriad of problems for their residents.

Nine of California's 11 industry sectors gained jobs in September, led by leisure and hospitality based on what state officials said was strength in performing arts and spectator sports.

September's hiring slowdown appears to have not impacted California's finances. California gets most of its money from taxes on personal income, sales and corporations.

So far, the state is collecting a lot more money than officials thought it would. New estimates published Friday show the state is on pace to have between "$8 billion and $30 billion in unanticipated revenue" this year, according to the nonpartisan Legislative Analyst's Office.

That's mostly because of the state's high concentration of billion-dollar tech companies and their wealthy executives who pay a higher tax rate on capital gains than most other states.

Officials with the state Employment Development Department say an outage to their website has been fixed, but after persistent problems. KTVU's Brooks Jarosz says the crashes and outages have to do with technology and new legislation that says upgrades have to be made before people get paid.

It's also because most of the state's job losses during the pandemic were of people with lower-wage jobs. The state's higher wage earners mostly kept their jobs and transitioned to working from home.

That doesn't mean California could have a $30 billion surplus next year. Every dollar of unanticipated revenue equals about 40 cents of state surplus because of constitutional requirements on how the state's money must be spent.

Still, Newsom was giddy about the numbers during an interview on Wednesday with NBC's Chuck Todd in Beverly Hills.

Responding to a question about California's homelessness crisis, Newsom said California has all of this extra money "because of the economic output that's second to none in all Western democracies over the last five years."

He said the money has allowed the state to make recent investments in homelessness services and affordable housing.

"We're investing an unprecedented amount of money, and we have political will and new accountability measures that have never ben in place at the local level to delver on the reforms necessary," he said.