A lack of income and access to food, health care, and government programs is putting the Bay Area Latino and Hispanic communities at a disadvantage during the coronavirus pandemic.

OAKLAND, Calif. - Disproportionally low income and a lack of access to food, health care, and government programs is putting the Bay Area Latino and Hispanic communities at economic and health disadvantages during the COVID-19 crisis.

Data from the largest county health departments shows it’s families from these backgrounds who are hardest hit by the coronavirus. In fact, a Pew Research Survey found half of all Latino and Hispanic families reporting someone losing a job or having their pay cut during the pandemic.

But KTVU found they’re also at the highest risk for catching and spreading coronavirus, according to local testing data. The numbers themselves are overwhelming, including in Oakland’s Fruitvale neighborhood where KTVU found Oakland City Councilman Noel Gallo organizing food drives and other outreach programs to help families in need.

“This is not the first emergency and for many of us living here every day is an emergency,” Gallo said of Latino and Hispanic families in the East Oakland neighborhood.

In Alameda County, Santa Clara County and San Francisco, hundreds of COVID-19 cases have been reported among the Latinx communities. Despite making up a smaller amount of the Bay Area's overall population, about 21 percent, according to U.S. Census data, the total of people from these communities testing positive is much higher. Collectively, those three county health departments have Latinos making up 37 percent of all known cases and growing.

“We are seeing similar patterns as we see in areas of asthma, diabetes and other types of issues,” Alameda County Director of Public Health Kimi Watkins-Tartt said. “People in the Latinx community are often working in those conditions where access to PPE and that safety is a struggle.”

A recent comprehensive report by The Labor Council for Latin American Advancement explains about 50 percent of Latinos don’t even have health insurance, citing U.S. Census data.

To make matters worse, many families are left behind during the shelter-in-place order and have no source of income as rent racks up and the food supply becomes scarce. 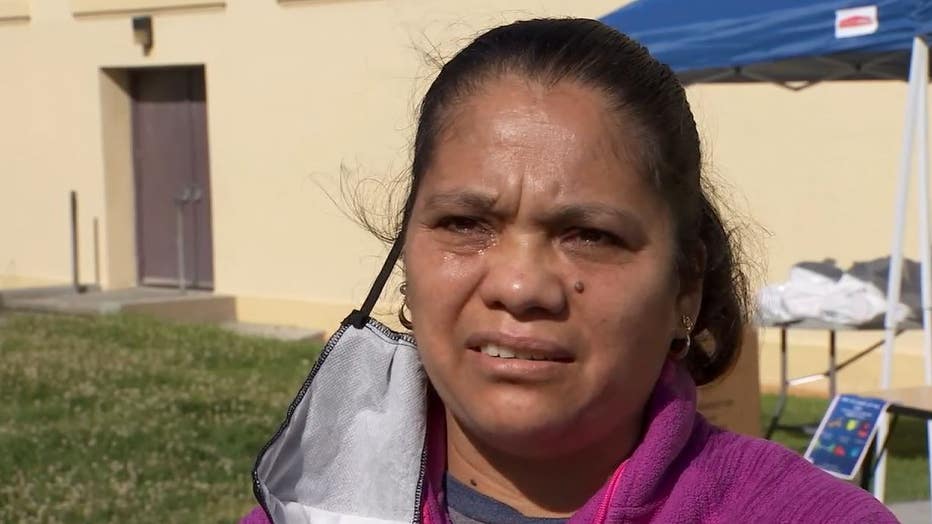 “It’s a hard time because we don’t have a job,” Fruitvale resident Rosalba Panidua said. “We don’t have money to pay our bills.”

Right now in Oakland, thousands of meals are getting bagged and given out to feed the needy each week through the school district and other organizations.

Jose Cervantes and his father lost their family food business but are volunteering, which has paid off in the way of food for their dinner table.

As many in the community struggle to afford daily necessities, some told KTVU that with the added stress of coronavirus it is a bigger challenge just to stay positive.

One reason is many Latinos face difficulty getting unemployment benefits even if they pay taxes. The problem is if they’re undocumented or don’t have a social security number they won’t qualify for assistance. That also includes the federal government’s stimulus checks aimed to help those without jobs or steady income during the pandemic.

“As long as I have a job and a place to work, I don’t care about that money,” Panidua said. “I know how to make my own – working!”

Still, it could be a long time before anyone sees a check and it’s unknown if the budget deficit will play any role in preventing that money from getting in the hands of those who desperately need it.

“We’re willing to do just about anything legally or illegally just to survive,” Gallo said. “We have to make a living. We have to work and sometimes the safety issue takes a secondary role.”

Several Latinx community members told KTVU the costs can at times outweigh the risks and suggested some who are asymptomatic are still working.

“I see my neighbors, I see the people in my community going to work every day sometimes with face coverings, sometimes without, struggling to get through this,” Watkins-Tartt said. “It saddens me but it also reminds me why I’m here and what my obligation is.”

Health directors, like her, said issuing the stay-at-home order early made a big difference and failure to do that would have resulted in increasing numbers of deaths and hospitalizations among the Latinx community.

The biggest challenge she said, is to inform, increase and encourage testing, and dispel any fear of asking for help.”

“Ask what you should do,” Watkins-Tartt said. “Don’t suffer in silence."

Brooks Jarosz is an investigative reporter for KTVU. Email him at brooks.jarosz@foxtv.com or follow him on Twitter: @BrooksKTVU