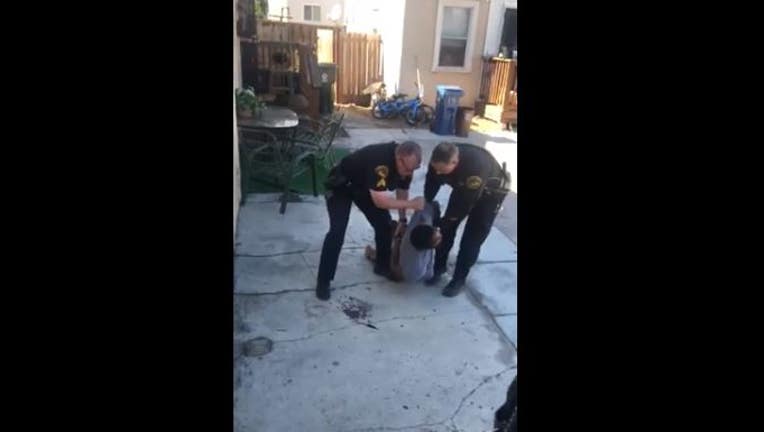 BAY POINT, Calif. - A Bay Point couple has filed a federal lawsuit against the Contra Costa County Sheriff’s Department alleging that their civil rights were violated when they called 911 for help – and instead of investigating the complaint, the deputies arrested the caller’s boyfriend instead.

Eddie Thomas Jr. and Dejanae Marshay Malone-McFarland are alleging that deputies Matthew Buckley and Thomas Shields had no warrant to search their home and lacked probable cause to believe that either of them were the perpetrators of any crime. The suit, filed Dec. 10 in US District Court Northern District of California, also accuses the deputies of using excessive force “in the absence of any objectively reasonable information that [he] had committed any crime. There was no need to use force against Mr. Thomas under these circumstances,” the suit states.

Reached on Tuesday, the sheriff’s office had no comment on the pending litigation.

According to the suit, Malone-McFarland believed she heard her neighbors fighting on Oct. 28, 2018 and so she called 911. She lives on Sapone Lane with her boyfriend and toddler. She said she told dispatch that the disturbance was coming from either the home one or two doors down on the same street.  Many of the homes in that area all share a common backyard.

When deputies arrived, Thomas went out and opened a wood door to the property, but he did not open a grated metal security door for the officers. 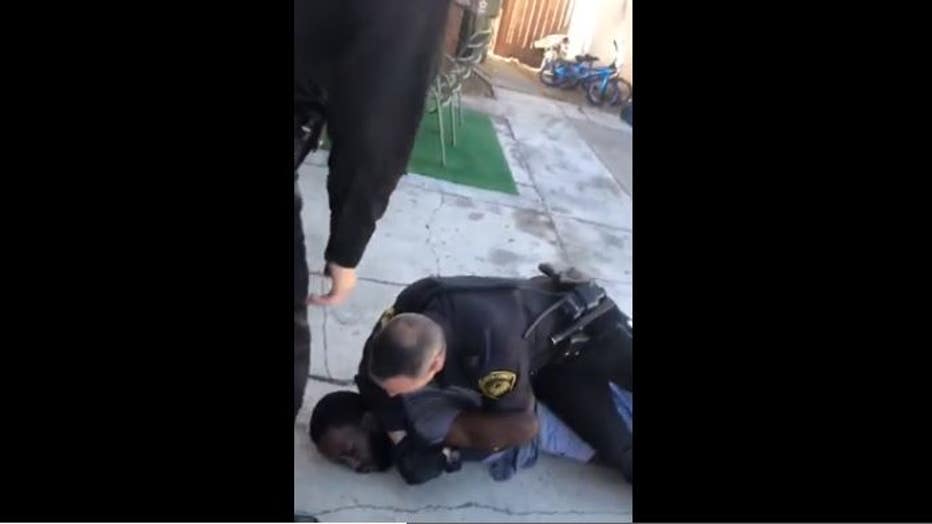 When deputies arrived, Eddie Thomas went out and opened a wood door to the property, but he did not open a grated metal security door for the officers. Oct. 28, 2018 (Kennedy Helm/via Dejanae Marshay Malone-McFarland)

The deputies told Thomas they were there to investigate a call of domestic violence. Thomas said he had just gotten home and would get his girlfriend. He said he asked the deputies to wait, the suit states. He didn’t realize at that point that his girlfriend had called about the neighbor’s fighting next door.

Meanwhile, the deputies forced the security door open and started yelling at Thomas.

They pointed their handguns at his stomach and shouted at him to get on the ground.

“Mr. Thomas was terrified and angry that Deputies Buckley and Shields were in his home pointing guns at him,” the suit states.

Thomas said that he put his hands in the air, dropped his cell phone and shouted, “What did I do? I didn’t do anything.”

The deputies forced Thomas onto the kitchen floor, put him in a “wrist lock” and handcuffed him, the suit states, which is corroborated, in part, by video taken by Thomas’ girlfriend at the scene.

At one point, Shields,  the field training officer, placed his knee on Thomas’ neck. And as they were leaving, Buckley, who was in training, did a “leg sweep” takedown maneuver on Thomas, causing him to fall on the concrete patio on his chin, the suit states. He began bleeding and needed to go to the hospital.

Thomas’ attorney, T. Kennedy Helm, provided KTVU of some cell phone video of the encounter. On the video, Thomas is heard yelling cuss words and profanities at the deputies.

But he is unarmed, and his lawyer contends he never posed a threat to the deputies. Helm also said neither of his clients has a criminal history, though he did acknowledge that deputies had been called out to that complex in the past, but he wasn’t sure for what.

At several points during the filming of the video, Shields is seen putting his hand in front of Malone-McFarland’s camera so that she cannot document what is going on.

Even though the sheriff’s office did not want to comment, KTVU did obtain a summary of the incident as told by the deputies. 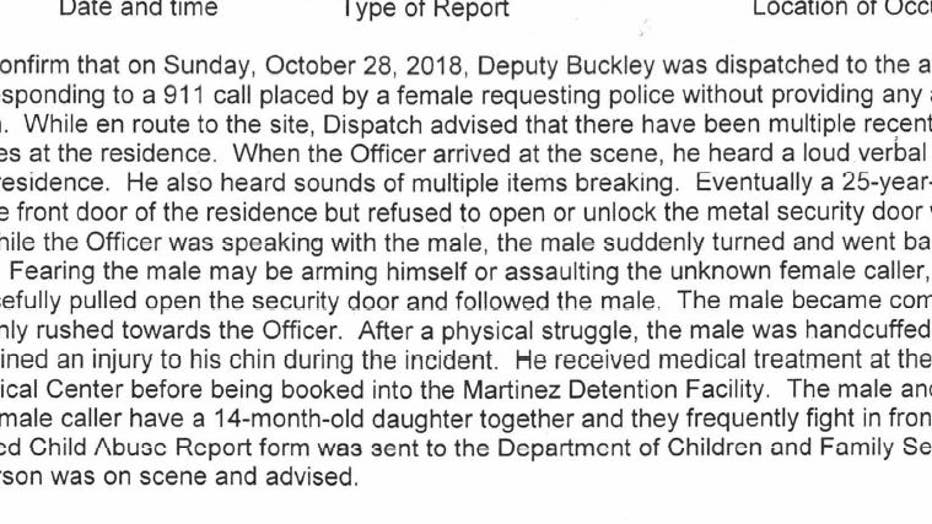 Sheriff's summary of what occurred in October 2018 on Sapone Lane.

In that report, one of the deputies wrote that he was called to an unspecified address where there had been “multiple recent domestic disturbances” at the residence. However, the specific address of these “multiple” disturbances is not listed. The incident report also makes no mention that the 911 caller asked that her neighbor’s home be investigated.

The sheriff’s office has declined to produce the 911 calls without a subpoena, Helm contends, so it's impossible for him to know what was really said.

When “the officer arrived,” he heard a “loud verbal argument” in the home and the sounds of “multiple items breaking," according to the sheriff's summary.

The deputy wrote the owner of the home refused to unlock the metal door to let him in. The deputy feared the man would “arm himself” or assault the woman inside, and that’s why he “forcefully pulled open the security door” and followed him. The deputy said the man became ‘combative and suddenly rushed toward the officer,” the incident report states.

The deputy's report also states that the couple who called 911 “frequently fight” in front of their daughter.

It’s unclear why deputies would say this,  Helm said, as “those claims are without basis.”

In the end, Thomas was arrested on charges of misdemeanor child abuse and he was booked into the Martinez Detention Facility. Three months later, on Jan. 26, the Contra Costa County District Attorney’s Office decided not to file any charges against Thomas, Helm said.

Buckley and Shields have never been disciplined or had any sustained findings against them under a police transparency law, SB 1421, according to a public records request returned form the sheriff’s office. The categories involved under this law involve dishonesty, sexual relations on the job, discharge of a firearm and use of force that results in death or great bodily injury.