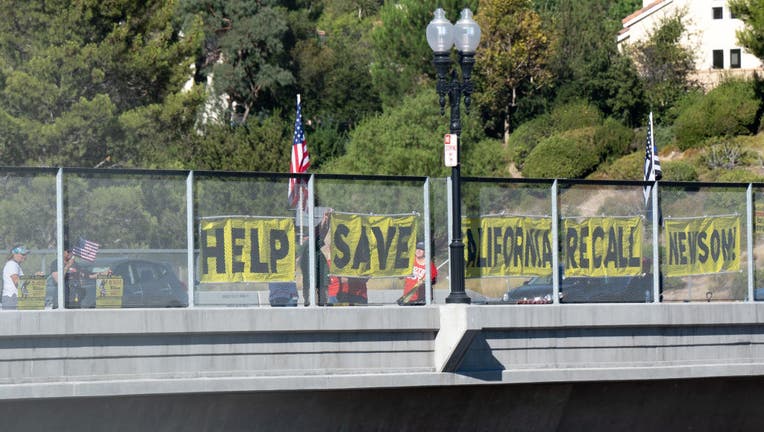 SAN RAFAEL, Calif. - A suspect is wanted in connection on suspicion of punching and kicking a man in his late 50s on Sunday during a pro-recall rally in San Rafael.

Sgt. Justin Graham said the suspect fled the area of the Coleman pedestrian crossing over the U.S. Highway 101 freeway and is wanted on charges of  assault with a deadly weapon and assault resulting in great bodily injury.

He is described as a 25- to 35-year-old white man, about 6 feet tall, weighing about 190 pounds, and has shoulder-length curly reddish blond hair. At the time, he wore a light-colored blue or green shirt, blue jeans, and blue baseball hat.

Graham said that at about 3:20 p.m., someone called 911 to report a fight on over the freeway.

When police arrived, they found that there were several people on the pedestrian overcrossing for the recall rally to vote California Gov. Gavin Newsom out of office. The recall vote is on Tuesday.

Witnesses told police that the suspect had walked into the area and began cutting down the anti-Newsom political banners with a knife. His particular political affiliation was not made explicit, Graham said, as he didn't say anything while cutting down the signs.

While he was doing that, the older gentleman confronted him, police said. Witnesses told police the two men were arguing, and pushing each other. The fight escalated, police said, when the suspect punched the older man several times, causing him to fall down.

Afterward, the suspect left the area and police are seeking help in finding him.

The older man was taken to a local area hospital where he was treated for his injuries. Graham would not comment on his injuries.

He also did not provide any photos or video from the assault.

Anyone with information about this crime is asked to call San Rafael Police at (415) 485-3000. Tips can also be made online at http://www.srpd.org/tips.