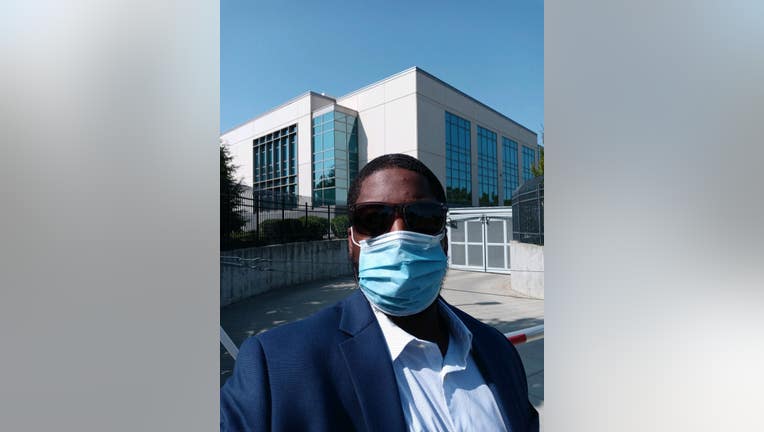 Roosevelt Tarlesson is being charged with resisting arrest. His lawyer said it is an effort to silence him. Sept. 16, 2020

MARTINEZ, Calif. - Despite assurances from Contra Costa County's top prosecutor that she would not criminally charge people with resisting arrest without hard evidence, her office launched a jury trial against a Daly City man on those very charges, even though he had been choked unconscious by a sheriff's deputy and a judge who witnessed the incident testified that she never saw the man pose a physical threat.

That man, Roosevelt Tarlesson, 40, is facing misdemeanor charges of resisting arrest and disturbing the court, stemming from a heated situation over child custody payments that occurred nearly 18 months ago.

Opening statements began in the courtroom of Contra Costa County Superior Court Judge Wade Rhyne on Wednesday. Prosecutors allege Tarlesson acted aggressively, even violently, in court, while the defense said he was just speaking up for himself.

"All the deputy saw was an 'angry Black man,'" Deputy Public Defender Ian McGrattan told the jury. "But that doesn't give him the right to be choked unconscious."

McGrattan also said his client is the injured party here, not the deputy.

"The deputy applied an illegal chokehold on Mr. Tarlesson, and he was choked unconscious," McGrattan said. "Mr. Tarlesson is the victim in this case. This is a travesty and a miscarriage of justice that he is even charged with a crime."

Separately, Tarlesson and his civil attorney allege that the criminal charges brought against him are part of an effort to silence him because he filed a federal excessive force lawsuit against Contra Costa County and the sheriff's office. The District Attorney's Office says this claim is false, but many civil attorneys say that anyone who is convicted of resisting arrest has a much more difficult time of winning an excessive force suit against a police department.

"Certain people of color suffer abuse by law enforcement," Tarlesson's San Francisco-based civil attorney Stanley Goff told KTVU in an interview. "And then the prosecution musters up these criminal charges against them to sweep what they did under the rug."

All the deputy saw was an 'angry Black man.' But that doesn't give him the right to be choked unconscious.

The charge of resisting arrest has come under renewed scrutiny following the death of George Floyd. Progressive-minded prosecutors said this summer that they will enact stricter oversight before charging someone with a standalone resisting arrest crime.

Contra Costa County District Attorney Diana Becton made a special point to note changes that her office would take before filing resisting arrest cases, which many acknowledge are unfairly filed against people of color.

That's because resisting arrest cases, without video, often become "he said, he said," without visual evidence to back up a police officer's allegations and put the alleged suspect at an immediate disadvantage.

Specifically, last month, Becton said her office would review "all available evidence," including body camera video, before charging a resisting arrest case. However, in this case, the Contra Costa County Sheriff's Office is one of the few police agencies in California that still does not use body cameras. The sheriff's office did not respond for comment.

Even as recent as Tuesday, as jury selection was underway in Tarlesson's case, Becton, along with other district attorneys, including Chesa Boudin of San Francisco, held a news conference to announce the formation of a “progressive law enforcement association.” Their group, which they are calling the Prosecutors Alliance of California, aims to lobby for criminal justice reform in the state Legislature, with an eye on “modern and sustainable approaches to achieving safety and community health.” 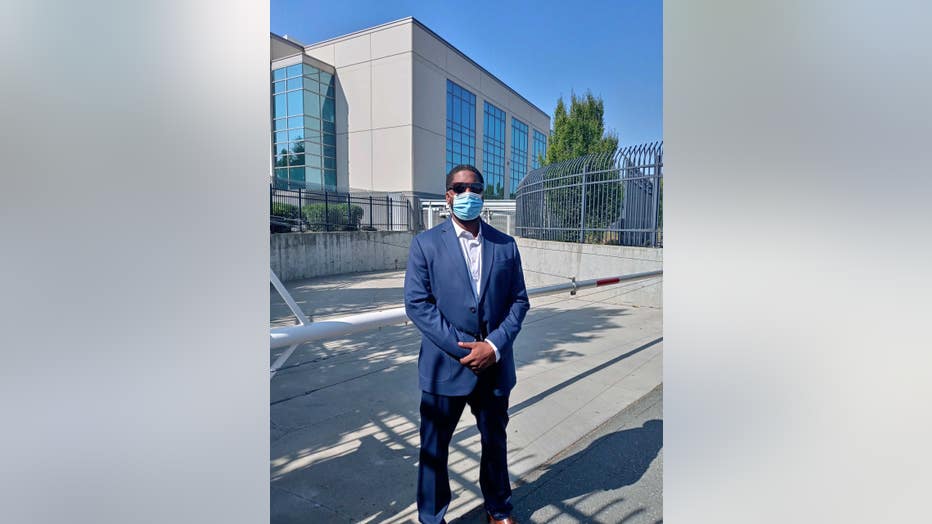 Opening statements began Wednesday, Sept. 16, 2020, in Roosevelt Tarlesson's resisting arrest case. He is standing outside the courthouse in Pittsburg.

Becton's spokesman, Scott Alonso, denied that his office is trying to silence Tarlesson.

“The allegations made by Mr. Tarlesson’s attorney are false and incredibly misleading," Alonso said in a statement. "Despite being out of custody, Mr. Tarlesson has chosen to proceed with his misdemeanor criminal trial ahead of his civil action. To claim that a trial is a suppression of his day in court is an inherently contradictory statement.”

Alonso added that in this case, even though there is no video, they have eyewitnesses: The court commissioner, the court reporter and the deputy himself.

"Our burden for filing any criminal case is to prove the charges beyond a reasonable doubt to a jury," Alonso stated. "If we can’t meet that burden we do not file the case."

However, the prosecution's key witness, Court Commissioner Mary Grove, appeared to undermine these assertions. Grove testified on the stand that even though Tarlesson was arguing in an "excited manner," he was not yelling and did not appear to pose a threat to anyone. She said she saw only saw the "beginning of the struggle" but she left the courtroom before she saw what actually transpired on Oct. 23, 2018.

Did she see him become physical with the deputy? No, Grove answered during cross examination.

Although she didn't testify to this on the stand on Wednesday because the judge in the case would not allow the questions to be asked in front of the jury, according to emails obtained before trial by KTVU, Grove said she thought the entire ordeal could have been avoided and charges should be dropped.

Grove gave this assessment to the deputy district attorney, who then summarized the conversation and emailed it to Tarlesson's defense team. In that conversation, Grove told prosecutors that while she saw that Tarlesson did not step away from the lawyer's table, she also thought the deputy should have waited for Tarlesson to calm down. She told the prosecutor that she "personally feels the situation could have been avoided if they waited a while instead of hauling him out of there," the email read.

In a second summarized conversation, this one to the public defender's office, Grove "theorized that the DA is unlikely to let it go unless client lets the civil suit go," according to an email obtained by KTVU.

The criminal charges stem from what Tarlesson documented in a federal lawsuit against the Contra Costa County Sheriff. Tarlesson got into a verbal scuffle with a deputy after Grove ordered Tarlesson, a beauty and barbershop supplier, to pay $50 more a month to his child's mother.

In an interview with KTVU, Tarlesson said he spoke up for himself, questioning why he should pay more when his ex earned the same amount that he did.

At some point, the deputy told Tarlesson to shut up, according to both accounts.

"And I said, 'You shut up,'" Tarlesson recalled of what he said in court.

According to Tarlesson, that's all that really happened before sheriff's Deputy Christopher Boutte grabbed him and took him down to the ground, putting him in a chokehold so that he couldn't breathe, according to his federal lawsuit. Tarlesson blacked out and went to the hospital. He had bruising and a sore throat for a month, the suit alleges.

But the sheriff's incident report paints a different picture. The deputy described Tarlesson as a man who kept interrupting the commissioner even though the hearing was over.  "Tarlesson didn't move and continued to be defiant," the incident report states.

Things got more heated, Boutte wrote in his account, when Tarlesson began moving toward him. Boutte said he warned Tarlesson that if he didn't leave, he would get arrested.  But Tarlesson wouldn't stop, Boutte wrote. He described Tarlesson as someone who "violently resisted" and who also called him a "punk ass b----."

"Tarlesson violently struggled with me and attempted to break free from my grasp," Boutte wrote.

However, the prosecutor in the case, Deputy District Attorney Danielle Brown, contradicted Boutte's account, telling the jury on Wednesday during opening statements that the deputy did use a "chokehold."

Brown described Tarlesson as a man who didn't respect the "polite" culture of the courtroom. She told the jurors: "Mr. Tarlesson doesn't think he has to show respect" and that "he always has to get his way, no matter what." She said his actions caused the clerk to push the panic button.

Tarlesson's team, however, finds the timing of the charges extremely telling.

No charges were filed against Tarlesson until August 2019. That's 11 months after the incident occurred and three months after Tarlesso filed a claim against the county, alleging that Deputy Boutte had used excessive force against him.

Alonso said his office would have had no idea a claim was filed in May 2019, and pointed out that Tarlesson was charged criminally before his federal lawsuit was filed in November 2019.

"All of a sudden, I get a call that there's a warrant for my client's arrest," Goff said. "The timing of this is crazy."