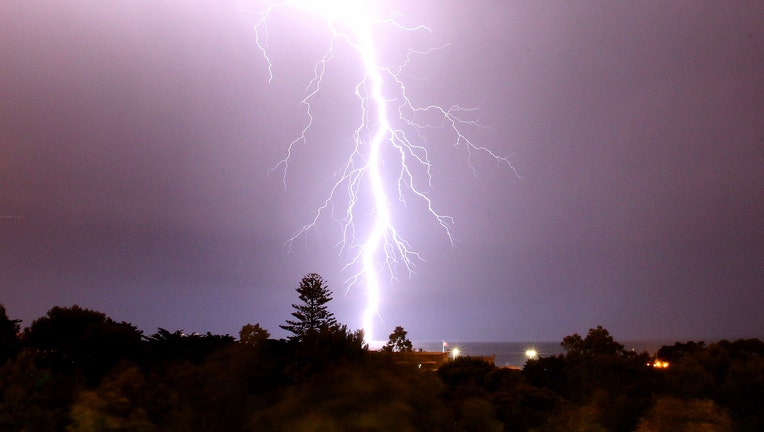 Lightning strikes during a thunderstorm over Greater Lisbon in Portugal, on July 21, 2020. (Photo by Pedro Fiúza/NurPhoto via Getty Images)

A man from Nevada was killed and his son was seriously injured over the weekend after multiple lightning strikes on a reservoir in Sierra County, left several hurt, according to officials.

The incident happened Saturday afternoon at the Stampede Reservoir, located northwest of Truckee, as thunderstorms were reported in the area.

Officials told FOX11 that Eugene Arao, 47, was on a jet ski on the reservoir with his son nearby when they were struck by lightning.

Shelly Brewster Bryant, who witnessed the lightning strike, shared details about the "horrific tragedy" on Facebook.

"His son was in the water next to him when he got struck," Bryant wrote. "He was recovered severely burned and unconscious CPR was initiated and he was moving his feet when paramedics arrived."

Bryant, who said she was about 30 feet from him when the lightning strike happened, said that several others were injured and burned.

"We had some minor damage to our boat....our sonar was fried from the strike and it knocked the wind out of our nine year old," she wrote. " She has some minor chest pain today but is doing well. My husband was able to get my daughter and I to the dock and we ran to a safer place."

A man from Nevada was killed and his son was seriously injured over the weekend after multiple lightning strikes on a reservoir in California left several hurt, according to officials. (iStock)

Officials told KOLO-TV that a total of four people were struck on Saturday afternoon. Two of those were described as "shocked" and later released from the scene.

After he was struck, Arao reportedly went underwater near a boat ramp and was declared missing. His body was later discovered about 20 yards from the shoreline.

His son was transported to an area hospital, with his condition not yet known.

The incidnet happened at the Stampede Reservoir in Sierra County, California. (Google Maps)

The deadly incident on Saturday was the first lightning fatality in California since July 18, 2015, according to John Jensenius, a lightning safety specialist at the National Lightning Safety Council (NLSC).

So far in 2020 there have been nine lightning-related deaths, according to the National Weather Service (NWS). Based on the past 10 years, Jensenius says the U.S. averages 16 lightning fatalities through July 26.

The death in California was also the 6th jet ski-related fatality in the U.S. since 2006. Between 2006 and 2019, a review of some 418 fatal lightning strikes found that 62 percent of deaths were linked to leisure activities.

Jensenius told Fox News last month there's a pattern to most of those.

Activities where people may be outside and not know if a storm is approaching when they are camping or fishing because they are using a motor on a boat that drowns out the sound of thunder are factors to consider.

If someone is at the beach, the sound of the surf may also drown out the distant rumbles of thunder.

"The key is if there's any threat at all, rumble of thunder or what looks like a threatening sky, you need to be able to get into a safe place very quickly," he said.