GEYSERVILLE, Calif. (KTVU) - The Sonoma County Sheriff's Office on Monday downgraded some areas from a mandatory evacuation order to a warning, allowing residents to return home, but at their own risk. 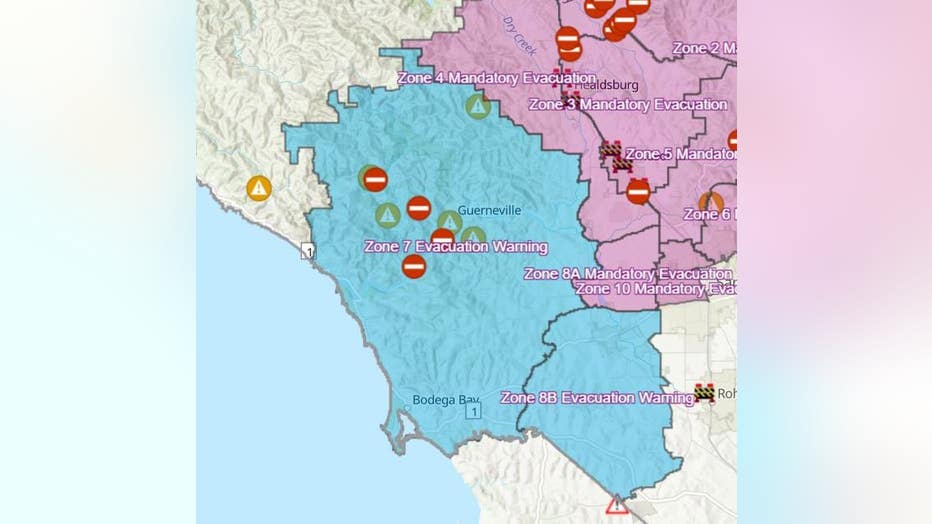 The pink/purple areas indicate the zones the are still in the danger of the Kindcade Fire and much of the area remains without power or natural gas due to the Pacific Gas and Electric power shutoff.

The blue areas represent the zones that have been reduced to an evacuation warning. Deputies residents who live in those communities didn't need to check in with anyone and didn't need an escort.

Zone 7 was downgraded to an evacuation warning. Residents in the following communities can return:

A portion of Zone 8, south of Occidental Road, is now under an evacuation warning, which includes the following sections:

The following road closure are in effect:

The portion of Zone 8, north of Occidental Road, is still under a mandatory evacuation order. This includes the Santa Rosa Country Club and Olivet/Piner areas.

To see if your address is evacuated, use the online, up-to-date evacuation map for Sonoma County to check. If you have any questions call 211.