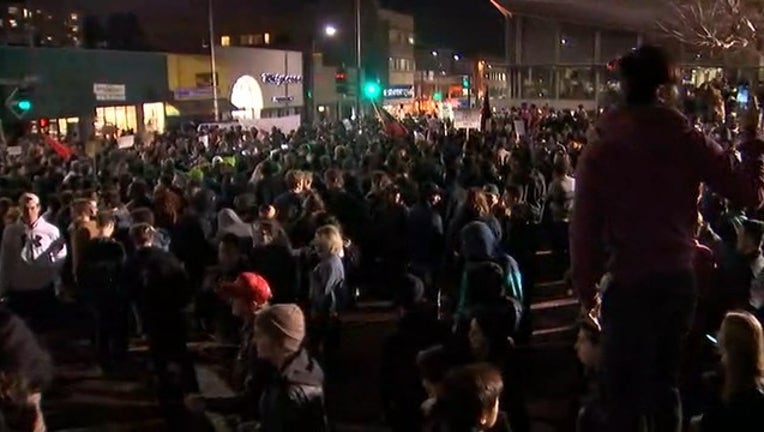 BERKELEY (BCN)--A march for Donald Trump is planned in Berkeley this Saturday, one of dozens planned nationwide to show support for the new president.

The "March 4 Trump" in Berkeley is the only event planned in the Bay Area and one of three planned in California. Marches were previously planned in Los Angeles and Sacramento, but organizers decided to cancel those to attempt to bolster attendance at the other events.

As of this afternoon, 133 people had said they were attending the Berkeley march on the event's Facebook page. Several commenters were trying to arrange rides, some coming from elsewhere in the Bay Area or the Central Valley.

Berkeley police Sgt. Andrew Frankel said today that the Police Department has been in touch with organizers and while they have not obtained a permit, they are coordinating with police.

The rally is scheduled for 2 p.m. at Martin Luther King Jr. Civic Center Park and then will march to the University of California campus at about 3 p.m., Frankel said. He said he did not know how many people would
attend.

There has been some indication that there may be counter protests at the event, including from anti-fascist groups who helped organize the violent protest against far-right writer and speaker Milo Yiannopoulos last
month.

Asked if police had any plans to prevent violence between different factions of demonstrators on Saturday, Frankel said, "The department is prepared for a number of different contingencies."

Counter-protesters have said that there is the potential for white nationalists to attend the march, but organizer Rich Black has pushed back against that suggestion in online postings, saying that no organizers have
any association with white nationalist groups.

"If any one person that shares the beliefs associated with white nationalism or belongs to any Neo-Nazi faction or Nazi Workers Party attempts to attend this event, they will be ejected immediately," Black wrote.

Asked how they plan to eject Nazis from the rally, Black said today, "We have security detail as well and police will be present. We will remove agitators and nazis flying any nazi banners are agitators."