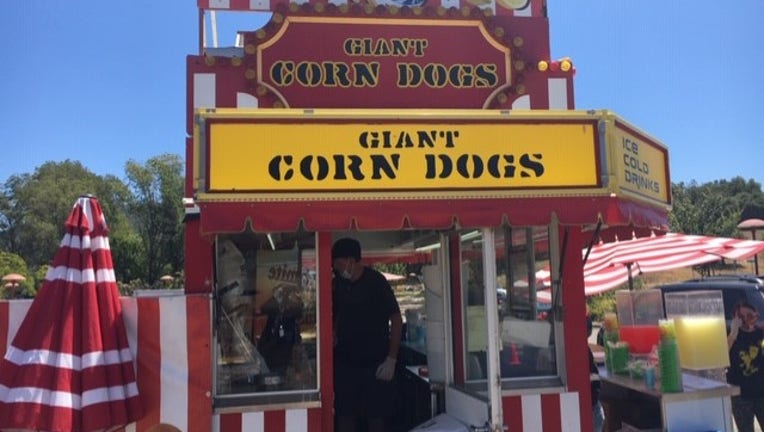 SAN RAFAEL, Calif. - Katelyn Daniel, 5, of San Rafael, was disappointed that there was no Marin County Fair this year. But she still got popcorn and lemonade thanks to a drive-thru in the fairgrounds' parking lot Saturday.

Cars were lined up 15-20 deep at three booths for giant corndogs, funnel cake, candy apples and more at the Veterans' Memorial Auditorium parking lot Saturday in San Rafael. The event runs 11 a.m. to 8 p.m. Saturday and Sunday, returning next Friday through Sunday.

"I went to the fair every year as a child," said Katelyn's mother, Heather Daniel, a lifelong Marin resident. "I'm grateful to have at least a taste of the fair via the drive-thru."

Like so many Bay Area institutions, the fair, which has run for more than 30 years, was cancelled this year due to the COVID-19 pandemic.

"We hope everyone will stay safe and creatively engaged at home and we look forward to serving our community, clients, partners, vendors and Fair family through this crisis," Gabriella Calicchio, the fair's director of cultural services, said on the Fair website.

Folks line up in their cars on the Avenue of the Flags and drive up to the booths, where employees in masks and other protective gear take their orders. Masks are mandatory for customers, who remain in their cars. The lines were long Saturday, but moved briskly. 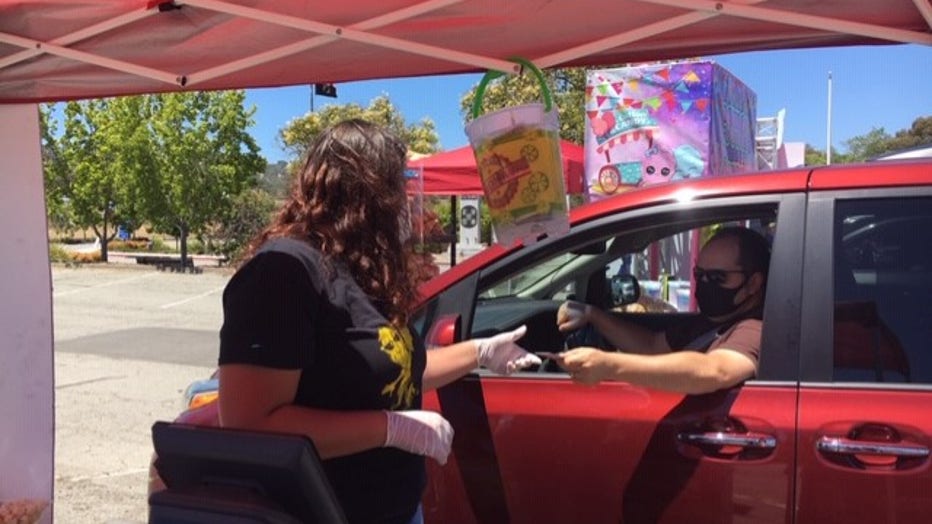 Among the throngs waiting in line for food Saturday was Georgia Smith of Novato. She has won Fair prizes for her jams and homemade Kahlua, the latter of which got Best of Show a few years ago, Smith said.

Teresa Taylor of Novato has attended the fair for the last 17 years. She said, "My favorite part of the fair is the artwork - paintings and sculptures." With the fair cancelled, she was looking forward to getting some kettle corn and funnel cake to make up for the loss.

The booths served 750 cars Friday and were expected to serve about 1,000 Saturday, according to Phillip Delahoyde, owner of Extreme Food and Beverage, whose company made the event possible. 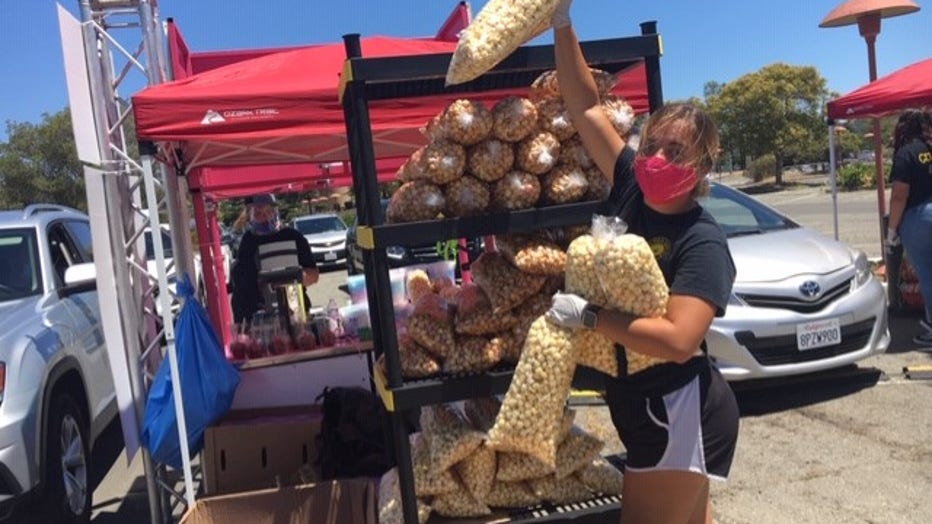 Delahoyde's family has run concessions at the Marin fairgrounds year-round for about a decade, and his company was able to do a similar drive-thru in northern California over the last few months, he said.

Julianne Bell of Fairfax said her favorite parts of the fair are rides "and the food. That's why I'm here."

Gregory Buich, whose car was further down the line, noted, "A corndog in July is one of life's great pleasures."