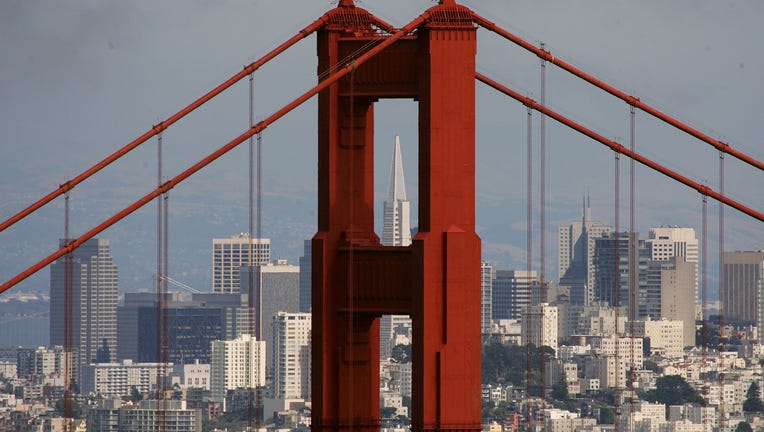 SAUSALITO, CA - JUNE 20: The Transamerica Pyramid building is seen through the north tower of the Golden Gate Bridge June 20, 2007 as seen from Sausalito, California. Pacific Gas and Electric has launched an estimated $1.5 million research program to

Residents in Marin County are the healthiest in California, according to a new study.

The 2021 County Health Rankings and Roadmaps report looks at factors such as education, jobs, income, and the environment to determine how healthy people are and what types of things will impact their health and longevity in the future.

In the new rankings, Marin was No. 1 in health factors and health outcomes among California's 58 counties. It was the 11th time in 12 years that Marin earned the top ranking.

Marin County continues to be a top performer in the state and country in the categories of length of life, quality of life, and clinical care. It ranked second in health behaviors and third in social and economic factors.

The County Health Rankings & Roadmaps report also reveals that all counties have areas where they can improve. Marin has one of the worst scores in income inequality and received low grades in housing affordability.

"The rankings echo what we've seen in the pandemic: as a county, we're doing well overall, but our weakness is inequities within Marin." said Dr. Matt Willis, county public health officer. "COVID-19 has deepened differences between groups, and those differences fall along lines of race and income. That's the work ahead of us as a community, through the pandemic and beyond. When all are able to thrive, that will be real cause for celebration."

While the report does not measure COVID-19 cases or rank risk of the virus spreading in communities, officials say rankings are helpful in providing local context on factors that impact health.

The rankings show clear racial disparities in health in Marin. While Marin ranks first in clinical care, these benefits differ among racial groups. For example, mammography rates for Black women are less than half of the rates among white women.