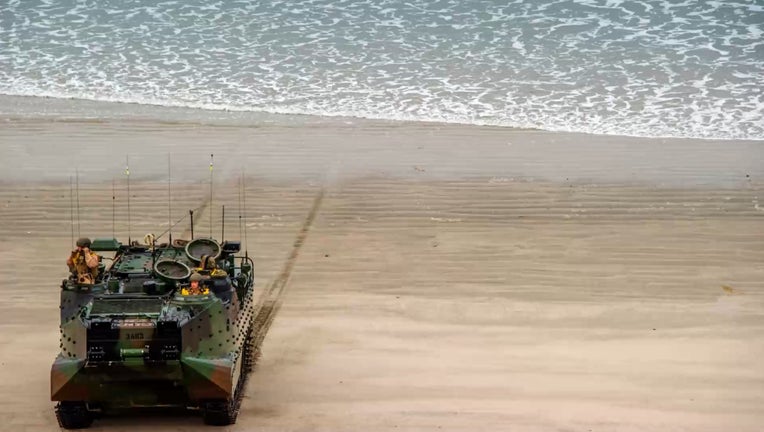 (FILES) In this file photo taken on February 19, 2014 AAV-7 Amphibious Assault Vehicles with 3rd Assault Amphibian Battalion, land with US Marines from 1st Battalion, 1st Marine Regiment, during the US -JAPAN military exercise Iron Fist 2014 outside

SAN DIEGO - Marines are training in seafaring tanks for the first time since nine men died when one of the troop carriers sank off the Southern California coast during an exercise last summer, a newspaper reported.

The Marine Corps’ fleet of the amphibious assault vehicles was suspended from all water training following the deadly accident July 30 near San Clemente Island.

Using the armored vehicles to transport troops from a ship to shore and back – what the tank that sank last year was doing – is still prohibited, the newspaper said.

An April 9 directive allowing some training with the vehicles comes with a checklist of tasks that have to be completed to confirm training, inspections and other preparation protocols are met, said Marine Capt. Andrew Wood.

The Marine Corps has said last year's accident was caused by inadequate training, shabby maintenance of the amphibious assault vehicles and poor judgment by commanders.

The Marines use the vehicles to transport troops and their equipment from Navy ships to land. The armored vehicles outfitted with machine guns and grenade launchers look like tanks as they roll ashore.