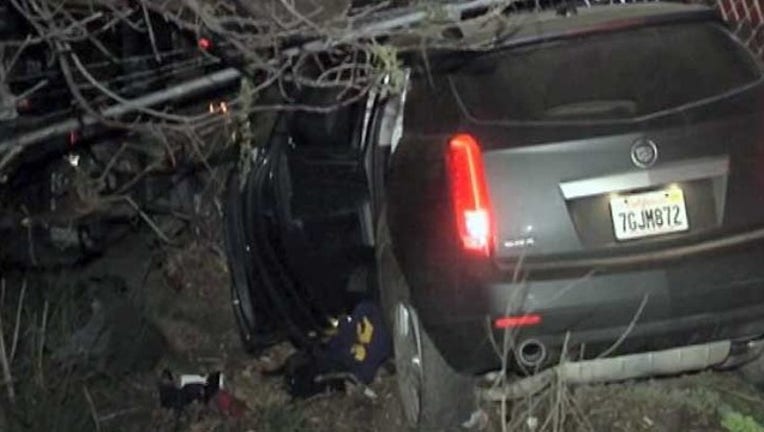 DENVER  (KTVU and wires) -- Five suspects arrested after a high-speed chase ended when their vehicle crashed into a Martinez fence have been charged in the smash and grab robbery of the Williams Jewelers store in Cherry Creek, Colo., federal prosecutors announced Friday.

The five were scheduled to appear Friday before a U.S. Magistrate judge in the Northern District of California in Oakland.

According to the affidavit in support of the criminal complaint, on Feb. 24th at 10:30 a.m., the Denver Police Department responded to a robbery at Williams Jewelers in the Cherry Creek area.

The owner of the store met with officers, telling them that a black female first entered the store looking at watches. She later left the store stating she was going to get her credit cards. At that time, three black males wearing black hoodies and black masks and armed with handguns entered the store and robbed the victims at gunpoint.

The owner told investigators that one of the robbers moved him from the back of the store to the desk area of the store at gunpoint. Employees at the jewelry store described certain characteristics of the female who was in the store prior to the robbery, including the way her fingernails were painted.

Several witnesses observed a maroon Chevy Blazer fleeing the area of the robbery at a high rate of speed.

One told investigators that the suspects were yelling as they jumped into a running and moving red SUV.

Denver Police officers tracked that Chevy Blazer SUV to an alley next to 370 Clayton Street in Denver.

A records checked determined that the owner of the Blazer was an Aurora resident.

The buyers contacted him from an out of state phone number and he sold it to the individuals for $1,550 in cash.

The buyers came to the purchase in a newer Cadillac "Crossover" SUV with California plates. Law enforcement was able to determine the California license plate number.

Additional investigation determined that based on the license plate the Cadillac SUV was rented at San Francisco Airport from Enterprise Rent-A-Car.

On February 25th obtained a federal court order to contact OnStar. An employee from OnStar utilized the GPS feature for the vehicle in question, determining that at approximately 3:15 a.m. Mountain Standard Time, or roughly nearly 17 hours after the robbery of Williams Jewelers, the vehicle was located driving in a southbound direction on Interstate 80 near Roseville.

After the Cadillac was involved in a single vehicle crash off of Interstate 80, in the San Francisco Bay Area, officers reported that four to five occupants fled the vehicle on foot. Ultimately five occupants were taken into custody by the CHP.

In the vehicle was a Glock semi-automatic handgun.

One defendant also had at least five Rolex watches, including one that had serial numbers matching a watch taken at Williams' Jewelry. Follow up investigation with witnesses and victims of the crime, as well as additional analysis of evidence obtained resulted in all five people in the car being charged with federal robbery crimes.

Federal investigators said Sawyer, who matches the surveillance video of the woman in the store who said she was interested in watches and was observed to have specifically painted fingernails and who is seen on video opening the store doors for the robbers, was in the crashed car.

Suwannabart was also in the crashed car. She matches surveillance video taken from the Englewood Williams Jewelers store, where on February 23rd she was carefully watching the store.

"The raw violence used in the take-over robbery of a Denver jewelry store left no doubt of the urgent need to identify, locate and arrest the perpetrators," Walsh said in a prepared release. "

If convicted each defendant faces not more than 20 years in federal prison, and up to a $250,000 fine