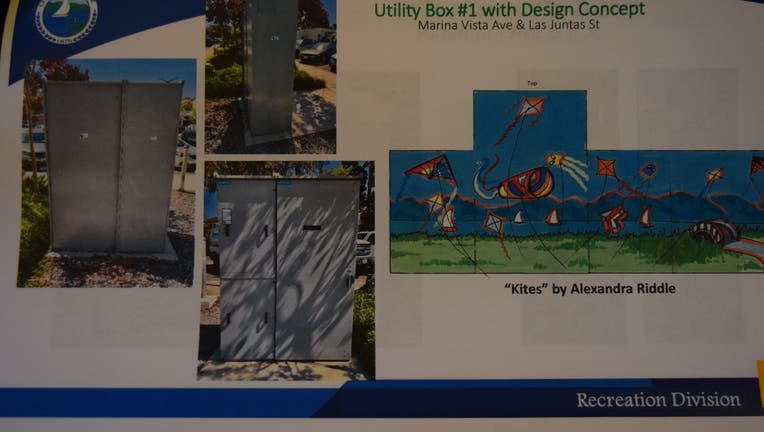 The Council voted 5-0 to approve designs for city-owned cabinets off Marina Vista Avenue downtown near the Contra Costa Community College District building; at Alhambra Avenue at F Street, near Safeway; at Alhambra and K Street; and at the south end of the city, at Alhambra at Paso Nogal Road, near the Virginia Hills Shopping Center.

The council's approval also included pursuing agreements with four artists -- one for each box -- to do the artwork, based on designs they had submitted for selection to take part in the program.

Zach Seal, a senior management analyst with the city, said the idea has been under discussion since 2015. Twenty-four area artists answered a call from the city to submit sample artwork, Seal said; four were selected for the trial program by the city's Parks, Recreation, Marina and Cultural Commission.

"We had a lot of different designs to choose from, to sift through," Seal said.

All four cabinets are city-owned; PG&E didn't want any of its boxes used, Seal said, because they want their boxes uniform in appearance to make identifying them easier for crews doing repairs and maintenance.

The artists won't paint directly onto the cabinets; their work will be transferred onto "vinyl wraps" similar to those used for advertising on the sides of buses or BART cars.

They take special solvents and tools to remove, Seal said; they have a five-year warranty, but other cities with utility box art programs report that they often last 10 years, he added -- much longer than a painted surface would last.

The pilot project is anticipated to cost about $10,000, with funding already allocated.

"In other cities, these boxes ... are entered into Ingress and Pokemon Go!," said Sanchez, describing two popular augmented reality mobile games. "I will geotag them myself -- this will definitely bring people in -- this is a core thing with these games."

Assuming all goes smoothly, Martinez officials hope the utility boxes will be public art pieces by the end of June. If the artistic value-added boxes prove popular, and additional funding is identified, treating additional boxes could be considered, city officials said.