Masks auctioned off for $25,000+ during coronavirus pandemic

Pallets of surgical masks and personal protective equipment, critically needed during the coronavirus pandemic, were found to be sitting in warehouses and then auctioned off to the highest bidder.

OAKLAND, Calif. - Pallets of surgical masks and personal protective equipment, critically needed during the coronavirus pandemic, were found to be sitting in warehouses and then auctioned off to the highest bidder.

A website that sells a variety of government surplus had states in a fierce battle over numerous pallets of N-95 respirators in March, selling for as much as $25,000, a KTVU investigation discovered.

Air Force veteran Mark Lindquist first found the problem when he wanted to help those healthcare workers on the front lines. A simple internet search for masks took him to GovPlanet.com, a site that resells government surplus equipment. Lindquist said he wanted to buy and deliver masks to his local veterans affairs’ hospital in Phoenix.

“I believe everybody’s first focus should be, let’s make sure our people don’t die,” Lindquist said of the pandemic.

When he began searching for N-95 respirators, he stumbled upon a pallet of more than 7,700 masks. Online bidding began in mid-March with someone in Florida offering $11,500 or roughly 67 cents a mask. During the following days of bidding, buyers in California and New Jersey were duking it out, sometimes minute by minute, with bids topping tens of thousands of dollars. The winning bid was from New Jersey at $26,900 or about $3.50 a mask on March 17.

To make matters worse, it was possibly government agencies bidding against one another for what was originally government property. Also, the masks were expired by at least seven years. Still, it’s better than no mask at all for first responders.

“I think it’s ridiculous,” said one Bay Area nurse who didn't want to give her name out of fear for her job. “All the hospitals are running low on supplies and we need them for patients, we need them for employees and medical staff right now.”

GovPlanet called this auction of critical supplies an isolated incident and blamed a private seller even though the website's company acted as the auctioneer. 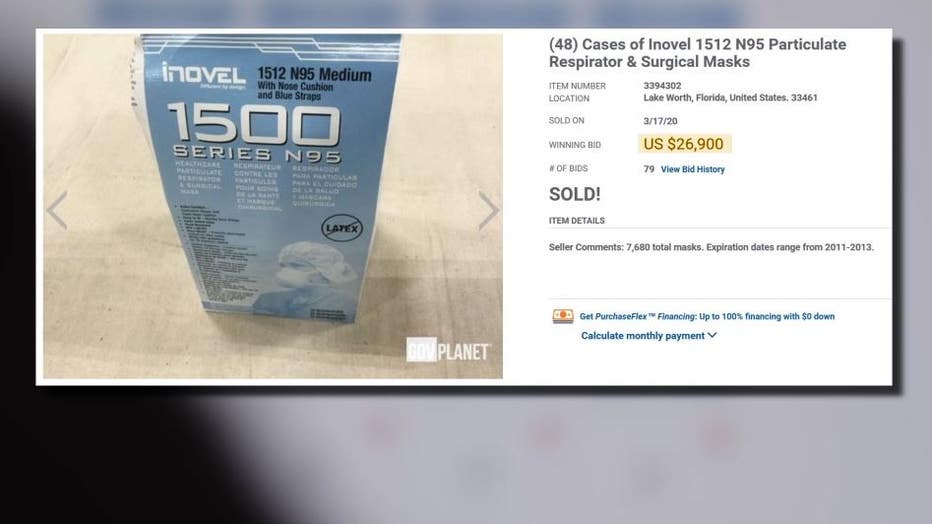 Exactly one year ago, previously available online records show a pallet of N-95 masks selling for $250 or 25 cents each.

U.S. Attorney General William Barr said in late March that President Trump signed an executive order to address hoarding and price gouging on scarce medical supplies. However, surgical masks have not yet been deemed ‘scarce’ by the federal government, despite threats they could soon be.

“If you are sitting on a warehouse of masks, you will be hearing a knock on your door,” Barr said at that time.

GovPlanet said it is not under investigation and a spokesperson said the company took action to remove N-95 masks and other medical supplies from inventory.

All auctions involving respirators and surgical gloves on the website have since disappeared and GovPlanet removed most of the evidence KTVU found of the N-95 masks.

Other items like ventilators are still for sale on the site, but the company insists it’s taking additional steps to respond including identifying any high-priority medical supplies. GovPlanet said it plans to return them to the government so they can get to areas of need.

For Lindquist, he fears more lives will be lost if action isn’t immediate.

“We need to get these things moving and I as an American citizen am asking them to do things now,” he said. “Leaders aren’t trying hard enough.”

Brooks Jarosz is an investigative reporter for KTVU. Email him at brooks.jarosz@foxtv.com or follow him on Twitter.