Rain is moving out

After an atmospheric river over the weekend, Rosemary Oroszco said the rain is moving out of the Bay Area

OAKLAND, Calif. - A massive storm barreled toward Southern California on Monday after flooding highways, toppling trees, cutting power to about 380,000 utility customers and causing rock slides and mud flows in areas burned bare by wildfires across the northern half of the state.

Drenching rains and strong winds accompanied the weekend arrival of an atmospheric river — a long plume of Pacific moisture — into the drought-stricken state.

There were widespread power outages in Northern California, with Pacific Gas & Electric reporting Sunday evening that about 130,000 customers did not have electricity, though the utility said power had been restored to about 250,000 customers.

But by mid-morning, the sun in the Bay Area was peeking through and the heavens appeared to have dried up for now.

Flooding shuts down highway in Fremont

Flooding closed Interstate Highway 880 on Monday in both directions in Fremont between the off-ramps at Mowry and Thornton avenues.

"It’s been a memorable past 24 hours for the Bay Area as the long talked-about atmospheric river rolled through the region," the local weather office said. "We literally have gone from fire/drought conditions to flooding in one storm cycle."

The weather service called preliminary rainfall totals "staggering," including 11 inches at the base of Marin County’s Mount Tamalpais and and 4.02 inches in downtown San Francisco.

"It looks like yesterday was the 4th wettest day ever for downtown SF where records go back to the Gold Rush years," the weather service said.

About 150 miles to the north, the California Highway Patrol closed a stretch of State Route 70 in Butte and Plumas counties because of multiple landslides within the massive Dixie Fire burn scar.

In the state’s Central Valley, Sacramento got 5.4 inches of rain, smashing the all-time one-day rainfall record dating to 1880, the weather service said. Interstate 80, the major highway through the Sierra to Reno, Nevada, was shut down by heavy snow early Monday.

The same storm system also slammed Oregon and Washington state, causing power outages that affected tens of thousands of people. Two people were killed when a tree fell on a vehicle in the greater Seattle area.

Massive rock and mudslides have shut down Highway 70 near Greenville.

In California’s Colusa and Yolo counties, state highways 16 and 20 were shut for several miles because of mudslides, the state Department of Transportation said.

Burn areas remain a concern because land devoid of vegetation can’t soak up heavy rainfall as quickly, increasing the likelihood of flash flooding.

"If you are in the vicinity of a recent burn scar and haven’t already, prepare now for likely debris flows," the Sacramento weather service tweeted. "If you are told to evacuate by local officials, or you feel threatened, do not hesitate to do so. If it is too late to evacuate, get to higher ground."

South of San Francisco, evacuation orders were in effect in the Santa Cruz Mountains over concerns that several inches of rain could trigger debris flows in the CZU Lightning Complex Fire burn scar when the storm moves through early Monday.

Further south, evacuation warnings for parts of western Santa Barbara County were upgraded to evacuation orders in the area burned by this month’s Alisal Fire.

Officials said mountain areas above 9,000 feet in the Sierra Nevada could get 18 inches (46 centimeters) of snow or more from Sunday until Monday morning.

Recent storms have helped contain some of the nation’s largest wildfires this year. But it remains to be seen if the wet weather will make a dent in the drought that’s plaguing California and the western United States.

California’s climate is hotter and drier now and that means the rain and snow that does fall is more likely to evaporate and less likely to absorb into the soil.

California’s 2021 water year, which ended Sept. 30, was the second driest on record and last year’s was the fifth driest on record. Some of the state’s most important reservoirs are at record low levels. 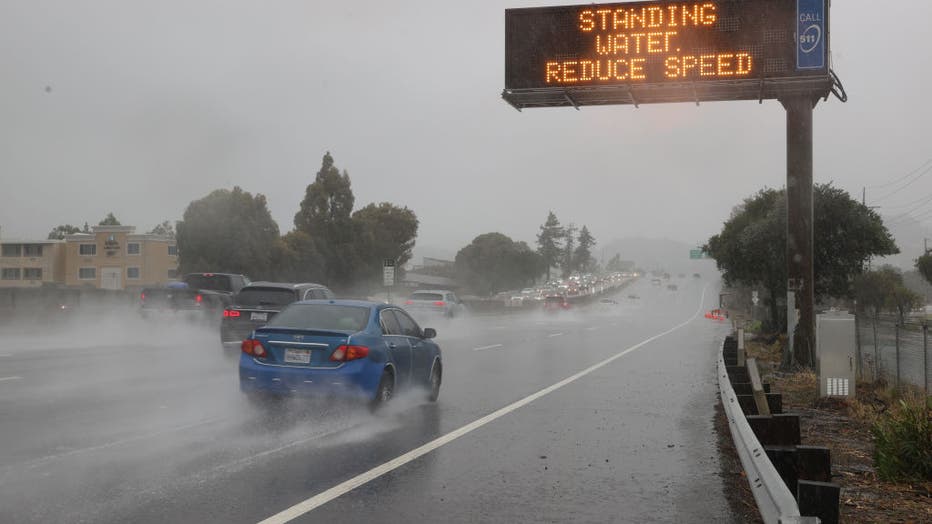 Cars drive by a sign on Highway 101on October 24, 2021 in Corte Madera, California. (Photo by Justin Sullivan/Getty Images) 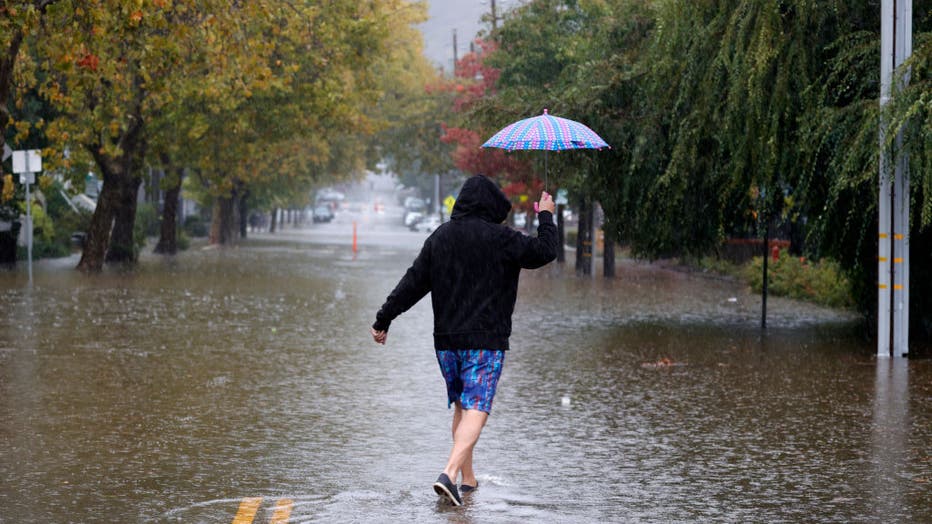 A pedestrian carries an umbrella as he walks on a flooded street on October 24, 2021 in San Rafael, California. (Photo by Justin Sullivan/Getty Images) 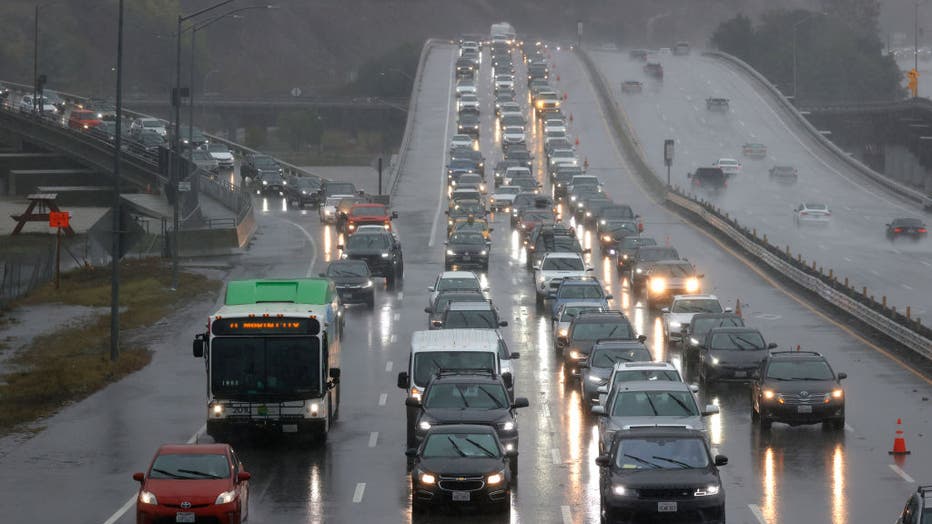 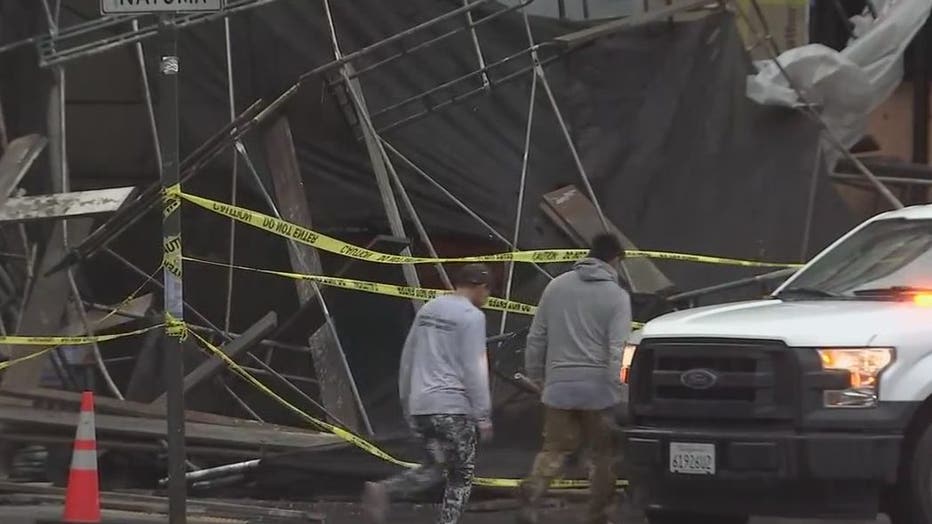 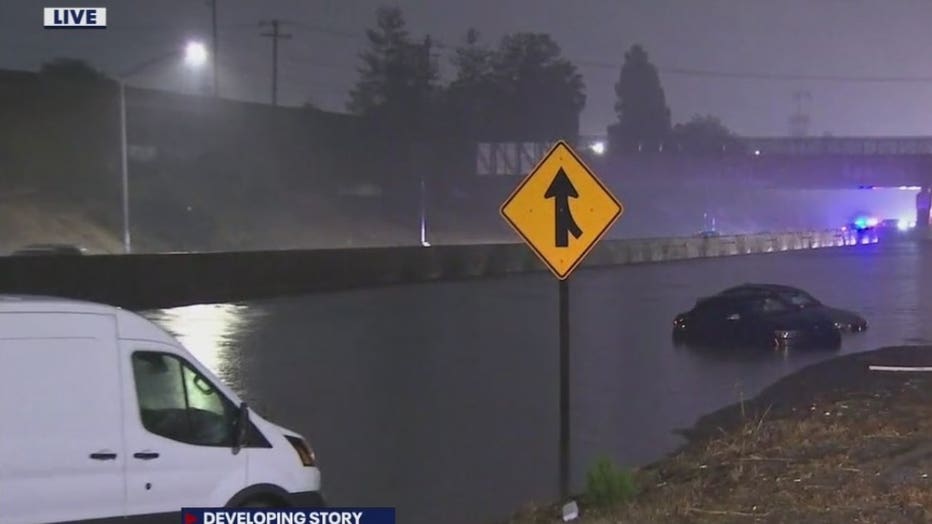