President Joe Biden spoke about the release of the May jobs report, showing U.S. employers added 390,000 jobs, in remarks on June 3, 2022.

WASHINGTON - U.S. employers added a healthy 390,000 jobs in May, extending a streak of solid hiring that has bolstered an economy under pressure from high inflation and interest rates.

Last month’s gain reflects a resilient job market that has so far shrugged off concerns that the economy will weaken in the coming months as the Federal Reserve steadily raises interest rates to fight inflation. The unemployment rate remained 3.6%, just above a half-century low, the Labor Department said Friday.

The job growth in May, though healthy, was the lowest monthly gain in a year. But it was high enough to keep the Fed on track to pursue what's likely to be the fastest series of rate hikes in more than 30 years. Stock market indexes fell Friday after the government released the jobs report, reflecting that concern.

Businesses in many industries remain desperate to hire because their customers have kept spending freely despite intensifying concerns about high inflation. Americans’ finances have been buoyed by rising pay and an unusually large pile of savings that were accumulated during the pandemic, particularly by higher-income households.

"Given all the talk we’ve heard about recession and economic headwinds, it was very reassuring to see a solid jobs number," said Mark Vitner, senior economist at Wells Fargo.

One encouraging sign, Vitner said, was that hiring was broad-based across most of the economy.

"When the economy loses momentum," he said, hiring tends to occur in just a few sectors, "and that’s not what we’re seeing today."

RELATED: Key inflation measure slowed in April for the first time since 2020

Nearly every large industry added workers in May. One major exception was retail, which shed nearly 61,000 positions. Some large retailers, including Walmart and Target, have reported disappointing sales and earnings. Last month, Walmart said it had over-hired and then reduced its head count through attrition.

Construction companies added 36,000 jobs, a hopeful sign for Americans who have bought new homes that aren’t yet built because of labor and parts shortages. Shipping and warehousing companies, still struggling to keep up with growing online commerce, added 47,000 jobs. Restaurants, hotels and entertainment venues hired 84,000. 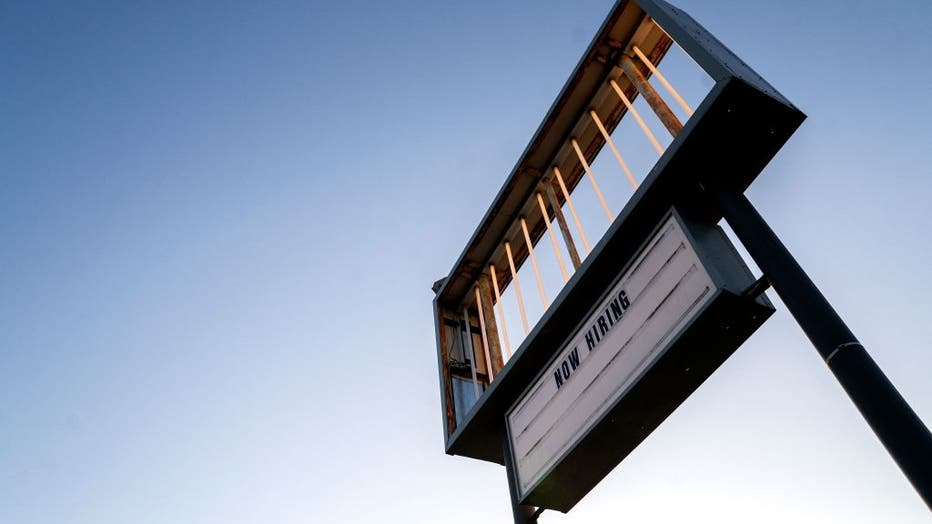 A Now Hiring sign is displayed in front of a restaurant in Rehoboth Beach, Delaware, on March 19, 2022. (Photo by STEFANI REYNOLDS/AFP via Getty Images)

Last month, Friday's report showed, more Americans came off the sidelines of the workforce and found jobs, a sign that rising wages and plentiful opportunities are encouraging people to look for work. Still, the proportion of people who either have a job or are looking for one remains below pre-pandemic levels.

Rising prices might also have led some to take jobs: The number of people ages 55 or over who are working rose last month, suggesting that some older Americans are "unretiring" after leaving their jobs — or being laid off — during the pandemic and its aftermath.

Average hourly wages rose 10 cents in May to $31.95, the government said, a solid gain but not enough to keep up with inflation. Compared with 12 months earlier, hourly pay climbed 5.2%, down from a 5.5% year-over-year gain in April and the second straight drop.

RELATED: US gas prices could top $5 a gallon by mid-June, analyst predicts

Workers, in general, are enjoying nearly unprecedented bargaining power. The number of people who are quitting jobs, typically for better positions at higher pay, has been at or near a record high for six months. Layoffs are at their lowest level on records dating back 20 years.

Yet there are signs that some companies, facing rising costs for parts and labor, are starting to resist demands for higher pay.

One such executive is Jackie Bondanza, CEO of Hounds Town, a chain of doggie daycares with 30 locations in 14 states. Bondanza said people are applying for jobs at the company's headquarters in Garden City, New York, who don't necessarily have relevant experience yet are demanding pay above the listed salary.

"People are coming in demanding 30% more," she said. "We can't afford to overpay for somebody."

Even so, Bondanza plans to keep hiring to support the company's expansion. Hounds Town, which expects to open 50 new franchised outlets in the next 18 months, is seeking to fill three jobs, including a training director and a marketing director. The company now has 17 employees at its corporate office, up from five a year ago.

Inflation, she said, has yet to discourage most customers from seeking the company's services, which include daily care for dogs and boarding.

"We are seeing more dogs in our facilities than some of our stores know what to do with," Bondanza said.

There are three factors that could lead to inflation which include demand-pull inflation, cost-push inflation and built-in inflation.

Tom Gimbel, chief executive of the LaSalle network, a staffing firm in Chicago, said his client companies are still eager to hire and to offer solid pay to new employees. But they're also being choosier about job applicants as a result.

After making clear to companies in the aftermath of the pandemic that they would have to pay more, he said, his firm is now starting to warn jobseekers that they may not secure the huge raises they're seeking, given the higher costs many companies are struggling with.

At the same time, the strength of the nation's job market is contributing to inflationary pressures. With wages continuing to rise across the economy, companies are passing on at least some of their increased labor costs to their customers in the form of higher prices. The costs of food, gas, rent and other items – which fall disproportionately on lower-income households -- are accelerating at nearly the fastest pace in 40 years.

Inflation had begun surging last year as spiking demand for cars, furniture, electronic equipment and other physical goods collided with overwhelmed supply chains and parts shortages. More recently, prices for such services as airline tickets, hotel rooms and restaurant meals have jumped as Americans have shifted more of their spending to those areas.

To try to cool spending and slow inflation, the Fed last month raised its short-term rate by a half-point, its biggest hike since 2000, to a range of 0.75% to 1%. Two additional half-point rate increases are expected this month and in July. And some Fed officials have suggested in recent speeches that if inflation doesn’t show signs of slowing, they could implement yet another half-point increase in September.

The Fed’s moves have already sharply elevated mortgage rates and contributed to drops in sales of new and existing homes. The rate hikes have also magnified borrowing costs for businesses, which may respond by reducing their investment in new buildings and equipment, slowing growth in the process.