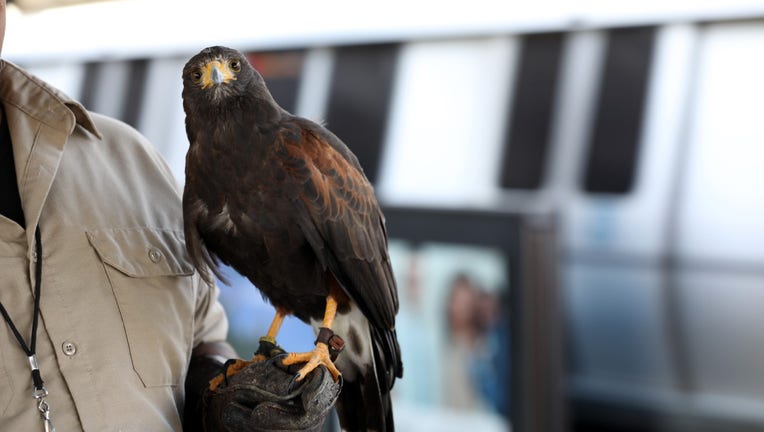 The hawk, named Pac-Man, and his handler, Ricky Ortiz, wander around the above ground station three times a week for eight hours a day. BART first hired Falcon Force, a California-based professional bird abatement service, in late May.

From owl statues to nets to spikes, BART has long attempted a variety of deterrents to decrease the station's pigeon population. Pigeons can nest in one location for years if not deterred, and their droppings can carry bacteria harmful to humans, though the station is cleaned daily.

"We did quite a bit to see how we could gently move them along," said Project Manager for the El Cerrito del Norte Station Modernization Project Wahid Amiri in a statement. "Nothing was successful."

While there are alternative methods to scaring off pigeons, such as poisons or horns, falconry-based bird abatement tends to be more effective and less troublesome.

Pac-Man is an adult male Harris hawk. Harris hawks are mellow yet social raptors, and Ortiz noted that Pac-Man is accustomed to the station noise, as this hawk breed is "used to hustle and bustle." As a predator, Pac-Man's presence naturally unnerves prey birds such as pigeons.

"It’s hard to beat a Harris hawk when it comes down to it," Ortiz said in a statement.