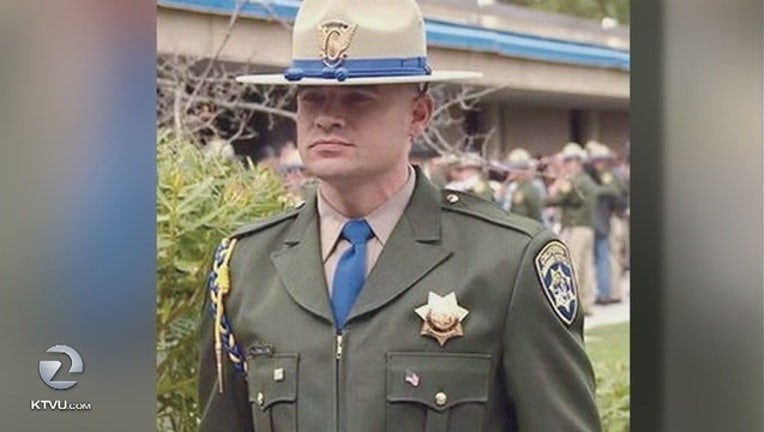 CHP Officer Andrew Camilleri died Christmas Eve when a suspected drunk driver hit the back of his patrol SUV.

STOCKTON, Calif. (AP) - A California Highway Patrol rookie killed by a drunken driving suspect in the San Francisco Bay Area was remembered Saturday as a loving family man who also loved his job.

Family, friends and hundreds of law enforcement officers and firefighters from around the country gathered to remember 33-year-old Andrew Camilleri of Tracy.

Camilleri, a father of three who had been a CHP officer since March, died on Christmas Eve when a Cadillac hit the back of his patrol SUV parked on the shoulder of Interstate 880 in Hayward.

The 22-year-old driver, who received serious injuries, was believed to be under the influence of alcohol and marijuana.

On Saturday, a funeral procession brought Camilleri's flag-draped casket from Tracy to the Christian Life Center in Stockton.

"Andrew died a hero, out on patrol on Christmas Eve, his life taken by the very dangers he was out to prevent," said Paul Fontana, chief of the CHP's Golden Gate Division.

Camilleri's patrol partner of three months, who was injured in the crash, said the two bonded while working the graveyard shift. Officer Jonathan Velasquez called him a "special person" and family man who talked about his wife and children on every shift.

Matthew Camilleri called his brother "a role model for all to follow."

Camilleri pursued his dream of becoming a CHP officer after working for a pest control company.

"Andrew's father Mike talked of how Andrew would call and text him all hours of the night telling him how much he loved his job whether it was helping a disabled motorist or issuing citations to speeding drivers because Andrew liked to drive fast," said Capt. Tim Pearson, who commands the Hayward division where Camilleri worked.

"Every morning when he got off work, he'd put on his superhero backpack, put his Power Ranger wallet in his pocket and walk out the back door," Pearson said. "Andrew is a CHP superhero."

Camilleri is survived by his parents, brother, a sister, his wife Rosanna, a 12-year-old daughter and two sons, ages 6 and 2.