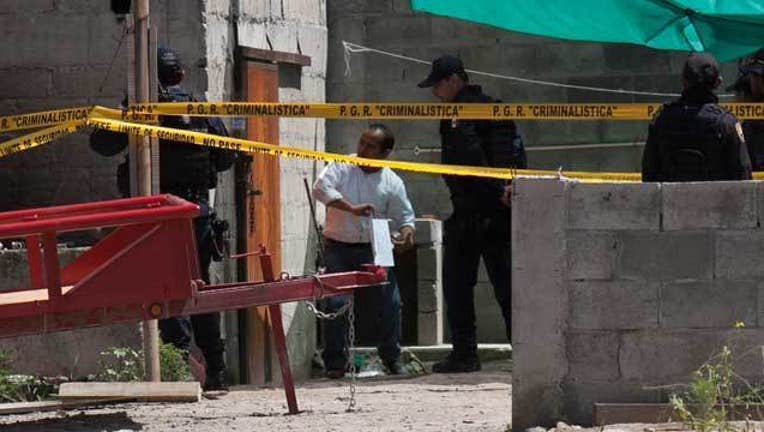 ALMOLOYA, Mexico (KTVU-AP) — The digging would have caused noise. The planners would have needed blueprints and maps. The escape was made from the one place beyond the view of security cameras at Mexico's toughest prison.

As authorities hunted Monday for any sign of Mexico's most powerful drug lord, security experts said it's clear that Joaquin "El Chapo" Guzman's escape through an elaborately designed tunnel must have involved help on a grand scale.

"How did Chapo escape? In one word: corruption," wrote Alejandro Hope, a former member of Mexico's domestic intelligence service, in his blog El Daily Post.

"He escaped through a mile-long tunnel, wide enough to hold a motorcycle, and ending in one of the few blind spots in Mexico's most-secure prison. How do you do that without some high-level corruption?"

U.S. authorities believe the tunnel through which Guzman made his audacious exit Saturday evening must have been in the works for at least a year, nearly as long as the head of the notorious Sinaloa Cartel had been at the Altiplano prison 55 miles (90 kilometers) west of Mexico City.

A tunnel of such sophistication — with lights, air venting, and a customized motorcycle rigged up on a rail line — would have taken 18 months to two years to complete, said Jim Dinkins, former head of Immigration and Customs Enforcement's Homeland Security Investigations.

"When it's for the boss, you probably put that on high speed," he said.

If anyone was capable of pulling off such a feat, it was Guzman, who is believed to have at least a quarter-century of experience in building large, sophisticated tunnels to deliver contraband under the U.S.-Mexico border and to escape from hideouts as authorities closed in.

One of his first tunnels was found in 1990 between Douglas, Arizona, and Agua Prieta, Mexico. Officials estimated the 200-foot passage would have cost $2 million to build at the time. It featured electric lights, pumps to keep it clear of water and elaborate entrances.

Joe Garcia, who retired this year as interim special agent in charge of U.S. Homeland Security Investigations in San Diego, has extensive experience in tunnel investigations. He said the tunnel at Altiplano was longer than any passage ever found on the U.S.-Mexico border.

Guzman must have had cooperation from government officials given the passage's length and sophistication, and the time required to build it, Garcia said.

DEA documents obtained by The Associated Press on Monday show work on hatching escape plots began almost immediately after Guzman was arrested in February 2014 and that he remained in charge of the Sinaloa cartel despite being locked up.

To pull off such a feat, rescuers likely had intelligence on the prison even before Guzman was arrested, Dinkins said.

Designers and workers would have needed access to sensitive information such as prison floor plans and alarm and camera systems. And just the noise alone as they bored the final 30-foot (10-meter) vertical passage directly under the prison to reach Guzman's cell would have generated some attention.

"It's not just like someone took a couple tools, shovels and pickaxes. This is a very sophisticated operation," said Alonzo Pena, a former senior official at U.S. Immigration and Customs Enforcement. "How could they be there and not hear that construction was going on underneath? It's just impossible."

The Sinaloa cartel is known to build tunnels in a San Diego industrial area partly because it's easy to blend in: Streets hum with semitrailers by day and fall silent on nights and weekends, U.S. investigators said.

The area around the prison is a giant construction site, with giant water pipes, trenches and excavation crisscrossing the landscape, which would have made it easy for the tunnel work to go unnoticed, Garcia noted.

"What probably worked well for them was all the construction around the facility," he said. "It's the removal of dirt and debris that can cause attention."

The tunnel led from the shower of Guzman's cell, under a field and to the floor of partially constructed cinder-block house.

An AP reporter at the structure where the tunnel ended observed that the dirt level in the yard surrounding the house is 2 feet to 3 feet higher than the rest of the terrain, indicating workers may have just spread dirt around the property rather than haul it out.

Mexico officials continued to question 30 prison employees on Monday, including the director of the prison, formally known as Federal Social Re-adaptation Center No. 1, which also houses many of the top capos nabbed in recent years by the administration of President Enrique Pena Nieto.

By Monday afternoon, the search for Guzman in the area near the prison had died down dramatically. Road blocks were gone and Federal Police patrols had lightened. Reporters traveled the area unhampered. Flights at the nearby Toluca airport that had been suspended on Sunday were back to normal.

The prison break is the second for Guzman, who infamously fled a different maximum-security facility in 2001, some say by hiding in a laundry cart, though there are other versions to explain that escape. He was on the loose for 13 years before being captured at a condominium overlooking the Pacific in Mazatlan.

He last was seen about 9 p.m. Saturday as he entered the shower area of his cell. After a time without seeing him, guards went to look for him and found something else entirely — a 20-by-20-inch (50-by-50 centimeter) passage into the earth.