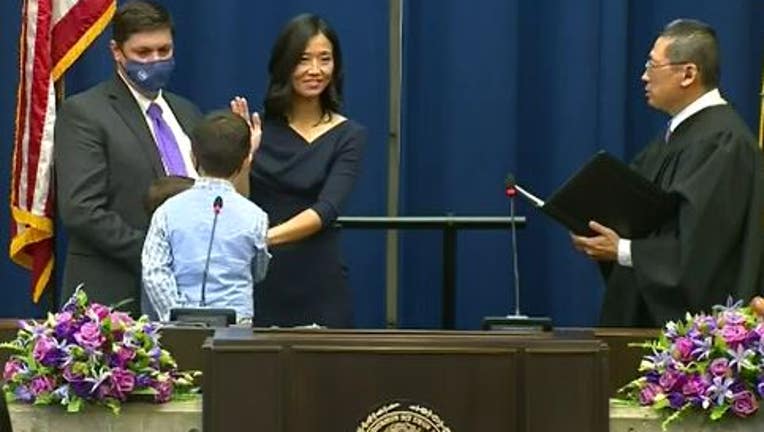 Michelle Wu was sworn-in as Boston Mayor during a ceremony at Boston City Hall on Nov. 16, 2021. Wu became the first woman and first person of color to be elected mayor in the city’s long history.

BOSTON - Michelle Wu was sworn in Tuesday as Boston’s first woman and first person of color elected mayor in the city’s long history.

The swearing-in of the city’s first Asian American mayor came two weeks after Wu won the city’s mayoral election. Before Wu, Boston had elected only white men as mayor.

"City government is special. We are the level closest to the people, so we must do the big and the small. Every streetlight, every pothole, every park and classroom, lays the foundation for greater change," Wu said after taking the oath of office. 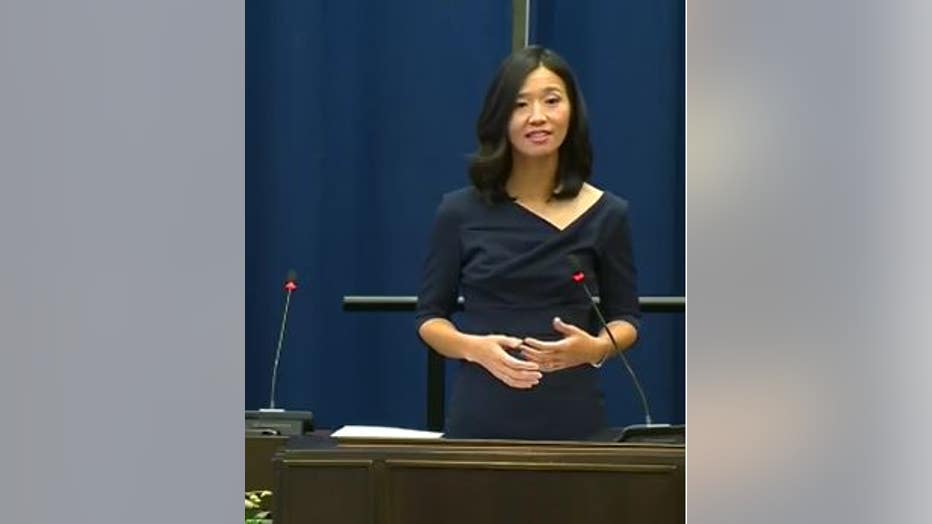 "After all, Boston was founded on a revolutionary promise: that things don’t have to be as they always have been. That we can chart a new path for families now, and for generations to come, grounded in justice and opportunity," she said.

Wu, 36, takes over for a fellow Democrat — former acting Mayor Kim Janey — who was Boston’s first woman and first Black resident to serve in, but who was not elected to, the top post.

Wu said when she first set foot inside the cavernous Boston City Hall, she felt swallowed up by the maze of concrete hallways, checkpoints and looming counters -- all reminders of why her immigrant family tried to steer clear of such spaces.

But she said her family’s struggles eventually brought her to an internship with former Mayor Thomas Menino and ultimately a seat on the Boston City Council where, she said, she learned the ropes of city government and politics.

"Today I know City Hall’s passageways and stairwells like my own home," she said.

The swearing-in means Wu will now face the daunting task of trying to make good on a slew of ambitious policy proposals that were the backbone of her campaign.

To push back against soaring housing costs that have forced some former residents out of the city, Wu has promised to pursue rent stabilization or rent control. The biggest hurdle to that proposal is the fact that Massachusetts voters narrowly approved a 1994 ballot question banning rent control statewide.

Another of Wu’s top campaign promises is to create a "fare-free" public transit system. Wu has said the proposal would strengthen the city’s economy, address climate change and help those who take the bus or subway to school or work.

Like the rent control pledge, Wu can’t unilaterally do away with fares on the public transit system. Wu has said she would try to work with partners in state government to make each proposal a reality.

In her comments Tuesday, Wu said it’s critical to tackle the big challenges she has promised while not losing sight of the nitty-gritty of city government.

"Not only is it possible for Boston to deliver basic city services and generational change — it is absolutely necessary in this moment," she said. "We’ll tackle our biggest challenges by getting the small things right."

Wu, whose parents immigrated to the U.S. from Taiwan, grew up in Chicago and moved to Boston to attend Harvard University and Harvard Law School. She has two small children.

Janey made brief comments before Wu was sworn in, thanking the city for the chance to serve as mayor, even for a brief period.

"I know that Boston is in good hands and I am so proud to call you Madam mayor," Janey said to Wu.

Janey had been president of the Boston City Council before taking over as mayor, the second of the city’s three mayors this year.

She rose to the top post on an acting basis when the city’s previous elected mayor, Democrat Marty Walsh, stepped down this year to become U.S. Secretary of Labor under President Joe Biden. Janey was sworn in March 24.

Janey attempted to use the status of the office in her run to replace Walsh, but she failed to garner enough votes to make it past the preliminary mayoral election that whittled the field down to two candidates — City Councilors Wu and Annissa Essaibi George.