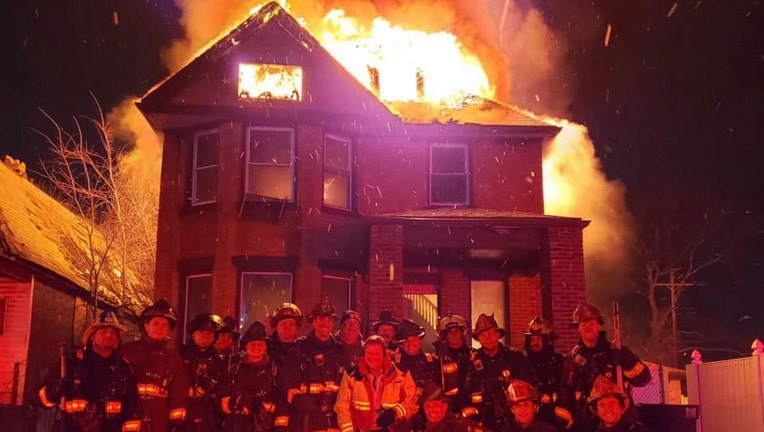 Firefighters in Michigan are in hot water after taking this photo outside a burning house. (Facebook/Detroit Fire Incidents)

DETROIT - The owners of a two-story Detroit home that went up in flames this week are infuriated over a group photo featuring grinning firefighters in front of the burning residence.

Deonte Higginbotham, 21, told the New York Post that the house on the city's West Side has been in his family for 50 years.

“They just let it burn to the ground," he told the newspaper Thursday of the New Year's Eve photo. “Eighteen men and none of them did anything. All of them need to be fired.”

He said neighbors told him the Detroit firefighters apparently barely put up an effort to save the home. The photo in question appears to show the group of firefighters posing while the home is engulfed in flames in the background. The structure was eventually burned to the ground.

Fire officials said the building was vacant and too dangerous to be saved because of the flames, according to the Post. The photo was taken in recognition of a retiring battalion chief, Deputy Fire Commissioner Dave Fornell told the paper.

“The chief in the middle of the picture there was retiring, and I think they just felt they would do this as a memento, but unfortunately, that’s probably not very professional,” Fornell added.

Higginbotham and his mother, Dorothy, 70, who has Alzheimer's disease, weren't at the home because it was being renovated, he said.

“She’s really sick right now,” he told the Post. “We were trying to get the house remodeled. She’s staying with family."

Fire Commissioner Eric Jones said the photo will be investigated.

“Ninety-nine percent of the men and women who go to a scene like that ... know what to do,” he told The Detroit News. “Behind every fire is a devastated family or property owner.”

The photo was posted to the Detroit Fire Incidents Facebook page, where it drew a mix of New Year's wishes and criticism.

It was removed at the request of firefighters over concerns about their jobs, according to a page administrator.