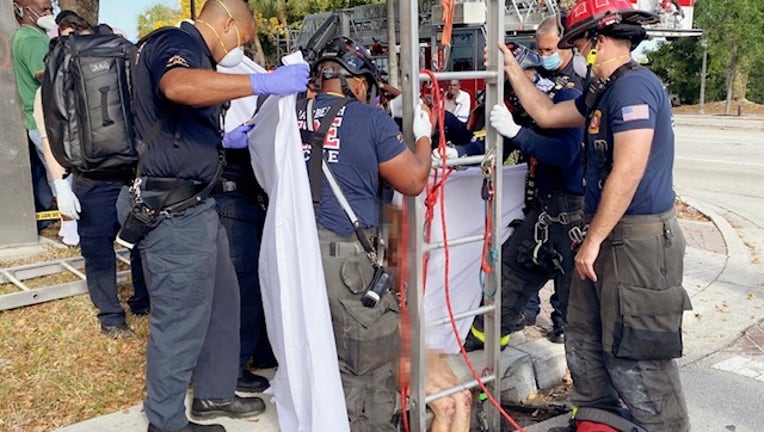 DELRAY BEACH, Fla. - A South Florida woman who had been missing for weeks was rescued from a storm drain after a passerby heard her cries for help, fire rescue officials said.

"She was lucky," Delray Beach Fire Rescue spokeswoman Dani Moschella told the South Florida SunSentinel. "I don’t know how much longer she would have been OK down there."

MORE NEWS: Kids found clinging to paddleboard over a mile off Florida coast

The woman was reported missing on March 3. She was yelling for help as rush hour traffic passed by Tuesday morning, Moschella said. So far officials don’t know how long the woman, whose name hasn’t been released, was in the storm drain.

"The idea that somebody might be down there for any length of time is disturbing," she said. "It’s dirty, dangerous, there’s snakes, rats, garbage, dirt and leaves, anything that’s on the street that washes into a sewer, and it smells terrible."

She was reported missing to the Palm Beach County Sheriff’s Office on March 3.

Moschella said the woman was too weak to stand up on her own. Fire rescue crews hoisted her from the 8-foot deep drain using a ladder and a harness.

The naked woman was covered in dirt, had leaves in her hair and scraped knees, Moschella said.

The entrance to the storm drain is too small for an adult to fit through, she said.

"From the police department standpoint, we don’t believe there was any type of crime committed," he said. "It doesn’t feel like she was taken against her will. It appears this was done by her own free will."