Dealings at the border: How Trump admin handled media versus Biden admin

Waves of new migrants, including families and unaccompanied children, continue to arrive at the U.S.-Mexico border daily, all while the Biden administration has repeatedly denied that there is a crisis. In El Paso, local shelters are not only dealing with asylum-seekers under former President Trump’s Migrant Protection Protocols program (MPP), but now, migrants from other Texas sectors too.

LOS ANGELES - A historic monthly high of more than 18,000 unaccompanied children were held in U.S. custody or care along the southern border with Mexico on March 31, according to data from U.S. Customs and Border Protection shared with FOX Television stations.

The influx at the U.S.-Mexico border has forced the Biden administration to find housing and open convention centers to house migrant children and teenagers.

Last week, the government partnered with San Diego to turn the city's convention center into a temporary shelter to support unaccompanied children seeking asylum in the United States. 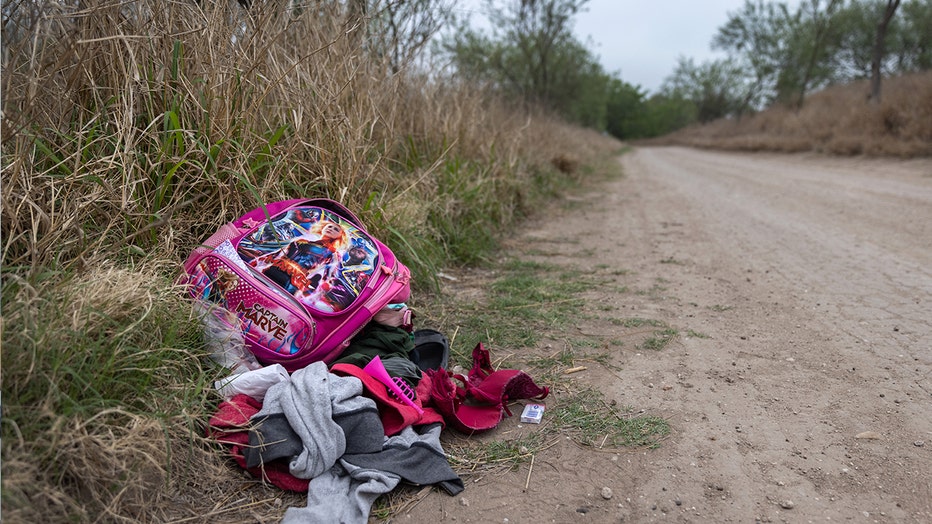 A child's abandoned backpack and clothing lie near an illegal river crossing point at the U.S.-Mexico border on March 24, 2021 in McAllen, Texas. A surge of immigrants, including unaccompanied minors crossing into the United States from Mexico is ove

San Diego Mayor Todd Gloria and San Diego County Board of Supervisors’ Chair Nathan Fletcher said that Health and Human Services Secretary Xavier Becerra "requested our help to house some of the unaccompanied minors at the border," saying they "knew it was the right thing to do," FOX News reported.

On Wednesday, a grainy video was released by authorities showing a man straddling a 14-foot barrier near Santa Teresa, New Mexico, dropping two young children to the ground.

"The inhumane way smugglers abuse children while profiting off parents’ desperation is criminal and morally reprehensible. Just this month, a young girl died by drowning, a six-month-old was thrown into the river, and two young children were dropped from a wall and left in the desert alone. There can be no doubt that children are exceptionally vulnerable when placed in the hands of smugglers. There is grave risk they will be exploited and harmed," Homeland Security Secretary Alejandro Mayorkas said in a statement Wednesday.

White House press secretary Jen Psaki said the administration’s focus, at this point, is "on solutions" and "putting in place policies, including expediting processing at the border and opening additional facilities."

"Our focus is on solutions and implementing them as quickly as possible," Psaki said.

"It happens every single, solitary year," President Joe Biden said during his first press conference, pushing back on questions by the media on whether his new policies have contributed to the rise in migrants at the border.

"There is a significant increase in the number of people coming to the border in the winter months of January, February, March," he said. "That happens every year."

According to the Associated Press, the number of children and families migrating to the U.S. has been escalating since 2013, with highs in 2014 and 2019, and a slight dip in 2015.

FOX News and the Associated Press contributed to this story.