Parade welcomes Simone Biles Back to Texas After Tokyo Olympics

Simone Biles is tied with Shannon Miller as the American gymnast with the most career Olympic medals.

The last whistle has blown, the flame lighting the cauldron has been extinguished, and just like that, the improbable Tokyo Olympics have come to a close.

Ninety-three countries took home medals during this year’s games, none more than the 113 collected by the United States. Team USA won 39 golds, 41 silvers and 33 bronzes.

But as always, the Games were about more than who stood atop the podium while their anthem blared over the loudspeaker. Here’s a look back at the most talked-about moments of this year’s Olympics.

Despite being delayed by a year, the Tokyo Olympics still took place amid the COVID-19 pandemic. Protesters spent months clamoring for the games to be canceled altogether as Japan endured pandemic health emergencies.

The International Olympic Committee stayed the course and refused another delay or cancelation, even as COVID made its way into the Olympic Villiage in the days before the opening ceremony.

Despite fears that the games would lead to a surge in cases in Tokyo, a report by Reuters suggests that hasn’t happened. And even though all competitions were threatened by the virus, very few athletes had to withdraw due to positive tests.

One reason: more than 70% of Olympians, media and organizers were vaccinated. And the Games took place inside a bubble environment, meaning there was no mixing with the general public, nor were fans allowed to attend. 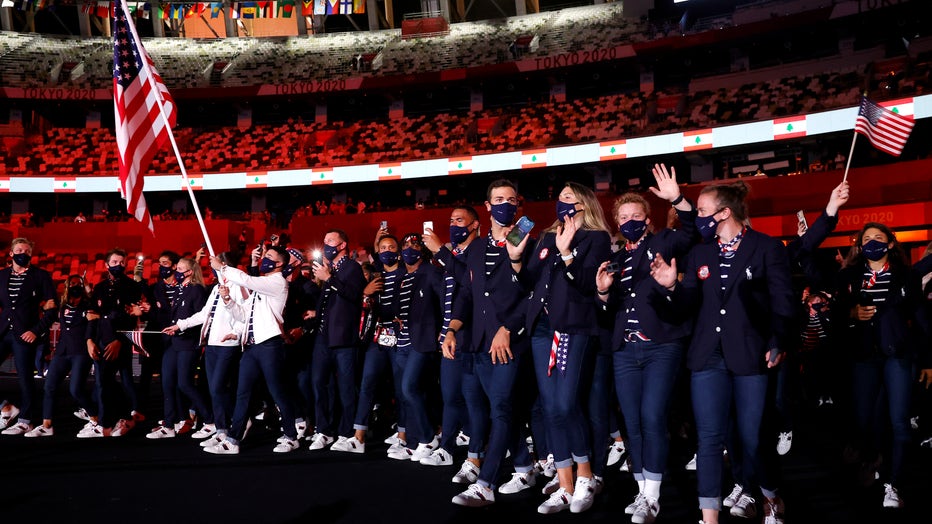 TOKYO, JAPAN - JULY 23: Flag bearers Sue Bird and Eddy Alvarez of Team United States lead their team out during the Opening Ceremony of the Tokyo 2020 Olympic Games at Olympic Stadium on July 23, 2021 in Tokyo, Japan. (Photo by Jamie Squire/Getty Ima

Simone Biles pulls out of most events

You could be forgiven for expecting a repeat of Simone Biles’ performance from the 2016 Summer Olympics. After all, America’s most decorated gymnast had done nothing short of draping herself in glory since Rio de Janeiro.

But Biles suffered several mishaps during the first week of the competition, botching landings on tumbling passes, the cheng vault and the balance beam.

Biles noted she felt the pressure of the Olympics wearing on her mental health and ultimately decided to remove herself from the team competition. The U.S. went on to claim the silver medal.

Days later, she withdrew from the individual all-around competition, still citing her mental health. She’d go on to describe her struggle with a case of the "twisties," which is when gymnasts struggle to orient themselves in the air.

Biles withdrew from the vault, uneven bars and floor finals. On the last day of event finals, Biles returned to the competition to take the bronze on the balance beam.

After the competition, Biles revealed she had learned of the death of her aunt in the middle of the Olympics.

There’s a growing acceptance of protesting during the national anthem in American professional sports, but the Olympics have never been so tolerant of such acts.

Tommie Smith and John Carlos are often praised for their Black Power salute during the 1968 Olympics in Mexico City. But they were stripped of their medals and sent home after it.

Ahead of the 2020 Games, the U.S. Olympic and Paralympic Committee said it would not punish athletes who demonstrate on the podium. The IOC relaxed its rules banning demonstrations, but still prohibited protests on the podium.

On Aug. 1, Raven Saunders, an American shotput thrower, won a silver medal. When she stepped atop the podium, she raised her arms and crossed them into an X.

Saunders, who is Black and openly gay, called the X "the intersection of where all people who are oppressed meet."

The next day, the USOPC supported Saunders by saying the gesture did not violate their rules.

Other athletes demonstrated during the Games. The U.S. Women’s Soccer Team knelt in protest of racism and discrimination ahead of a game with Sweden last month, as did British, New Zealand and Chilean footballers.

Australia’s women’s soccer squad posed with a flag representing the indigenous people of the continent.

The Tokyo Olympics will be the last Games in the storied career of Allyson Felix.

She came into Tokyo needing one medal to tie Carl Lewis as the sprinter with the most Olympic medals in American history. She got that by placing third in the 400m on Aug. 6.

One day later, she placed herself on top of that list with a gold medal in the 4x400m relay.

This trip to the Olympics carried even more purpose for the 35-year-old. She gave birth to her first daughter two years ago and had to get herself back into her racing routine.

During that time, she went public with a contractual dispute she had with Nike, claiming they were discriminating against athletes who become pregnant. She ended up leaving Nike and becoming an outspoken champion of maternal protections in contracts.

This year’s Games was the first Olympics for Team USA since Michael Phelps retired. With 28 medals, Phelps is the most decorated Olympian of all time, and surely not easily replaced.

But the American swimming team still made sure it was "The Star-Spangled Banner" playing during the medal ceremonies. Team USA took home 30 medals in the pool.

Eleven of them were gold, 10 were silver and nine were bronze.

RELATED: Amid chaotic waters in Tokyo, at this time in 2012 Phelps broke Olympic world record

He’s only the fifth swimmer to capture five gold medals in a single Olympics.

The U.S. is heavily favored in every competition, but they suffered shocking loss just days before the Olympic flame was lit.

Sweden defeated the Americans 3-0, forcing them to run the table for the remainder of the group stage if they hoped to advance to the medal round.

The Americans beat New Zealand 6-1 on July 24, but finished with a tied 0-0 with the Australians on July 27 — advancing to the knockout stage.

On July 30, they needed penalty kicks to get by the Dutch. In their medal round match with Canada, the Americans failed to score and saw their northern neighbors advance to the gold medal game.

The Canadians eventually went on to knock off Sweeden for gold while the Americans settled for bronze with a win over the Aussies.

After losing to Nigeria in a pre-Olympics friendly, the U.S. Men’s Basketball Team faced doubt before the games got underway.

When they lost to France in their first game, those doubts grew even louder. Experts wondered if the squad would be more like the 2004 team who, despite having the most talent in the tournament, only earned a bronze medal.

Even so, the Americans powered through the remainder of group play to knock off Czechia and Iran. In the knockout phase, they defeated the Spanish and the Australians — setting up a rematch with France.

This time, the Americans held off a French comeback attempt. They beat France 87-82 on Aug. 7 to win their fourth straight gold in basketball, 16th overall.

Not an ounce of doubt followed the U.S. women on the basketball court. They were heavily favored to bring home the gold, and it's easy to see why.

The U.S. had won six gold in a row and had not lost an Olympic game since 1992. The Americans kept that streak alive in Tokyo, securing their seventh consecutive gold medal with a win over Japan.

It pushed their all-time Olympic record to 72-3.

Veterans Diana Taurasi and Sue Bird competed in their fifth Olympics and became the first basketball players of any gender to win the gold five times.

Italian Gianmarco Tamberi and Qatari Mutaz Barshim found themselves tied atop the standings after exhausting all attempts.

Competition judges consulted with the men who opted to share a gold rather than deny their close friend a shot at glory. Tamberi, famously eccentric, erupted in celebration. He leaped around the track before falling to the ground in tears.

Barshim fist-pumped as he made his way to the spectators' area to embrace his countrymen.

According to USA Today, the two have been friends for many years. Tamberi broke his ankle before the 2016 Games. Barshim once suffered the same injury and helped him with recovery.

Krystsina Tsimanouskaya, a Belarusian Olympic sprinter sent home from Tokyo after criticizing her coaches, has found refuge in Poland after seeking protection from Japanese police at the airport.

She told Reuters she was contacted by her grandmother while on her way to the airport and advised not to return to Belarus because she could be sent to a psychiatric ward. According to The Associated Press, Tsimanouskaya said she approached airport police and translated a plea for help using her phone.

Belarus President Alexander Lukashenko won a sixth term last year but faced turmoil after the election. Tsimanouskaya did not publically criticize the president, but her criticism of her coaches could be of high interest to Lukashenko, who led Belarus' Olympic effort before handing the job to his son in February.

Poland has granted her a humanitarian visa.

America's Isaiah Jewett and Botswana's Nijel Amos were considerably behind the winner of their 800m heat on Aug. 2, about 54 seconds. So when they fell to the track, they didn't cost each other a win.

But their reaction to the fall created one of the most special moments of the entire Games.

Jewett and Amos shook hands as their made their way back to their feet. They proceeded to wrap their arms around the other and move towards the finishline together.

Jewett was in front of Amos as the pack rounded the final turn. His heel clipped Amos, sending them both to the ground. Later that night, Amos was reinstated in the finals on appeal.