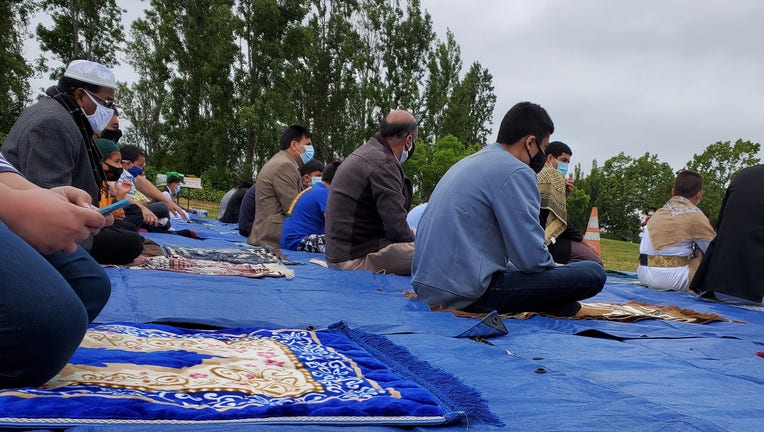 OAKLAND, Calif - As sunrise broke across the Bay Area on Thursday, thousands of Muslims began the day celebrating Eid al-Fitr, the end of the holy month of Ramadan.

With prayer carpets in hand, hundreds of Muslims gathered in Martin Luther Shoreline Park in Oakland.

They laid down a blue tarp to perform the traditional Salat al-Fitr or Eid Prayer which was held outside to accommodate all in attendance.

Wearing face masks and socially distanced, Muslims listened to a sermon from an imam and joined together in prayer. Thursday’s gathering was one of the largest gatherings since the pandemic began.

The imam, or leader of the prayer, told those in attendance "the pandemic is a test and our faith will be stronger after it is gone."

Eid al-Fitr is celebrated in the morning of the first day of ‘Shawwal,’ the 10th month of the Islamic lunar calendar.

Eid, which is held twice a year, consists of food and gifts and is commonly celebrated with large groups of people throughout the day. It is traditional that believers will greet each other saying ‘Eid Mubarak’ which means ‘blessed celebration.’

Muslims are also commanded to give to charity by or before the date every year.