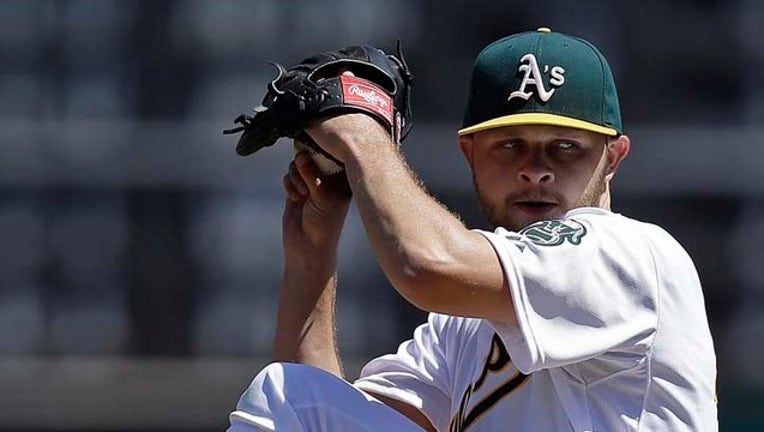 The Seattle Mariners left Oakland with a pair of extra-inning wins and showed off some nice pop from their slugging newcomers in the process. On a rare off day by ace Felix Hernandez against the Athletics nonetheless. On a day they were no-hit through five.

Cruz connected for the second straight game, hitting a tiebreaking solo drive in the 10th inning, and Weeks had an earlier pinch-hit, three-run homer that helped send Seattle past the A's 8-7 on Sunday.

"On several different accounts today we probably should have lost that game," manager Lloyd McClendon said. "It's the type of game where it's easy to lay down and say, 'OK, we'll get them tomorrow.'"

Hernandez left after five innings as a precaution because of tightness in his right quadriceps that made it tough to push off and generate momentum from his legs. He felt that in the third inning after tweaking his left ankle in the first. He said he "100 percent" will make his next start and has no concerns.

Seattle took a 7-3 lead into the ninth before Oakland rallied to tie it against closer Fernando Rodney.

Cruz connected off new A's closer Tyler Clippard (0-1) for his second homer this season. Cruz led the majors with 40 home runs last year for Baltimore, then signed with the Mariners.

"That's what we're here for, to pick up one another. Sometimes the offense is going to be there, and (sometimes) the pitchers will pick us up," Cruz said. "It showed a lot of heart from everybody."

Rodney (1-0) wound up with the win and Yoervis Medina finished for his first save in nearly two years.

The Mariners were held hitless by Jesse Hahn until Dustin Ackley doubled off the right field wall to begin the sixth. Seattle won despite getting outhit 14-7.

"It happened in a hurry there in the sixth," A's manager Bob Melvin said. "But early on, I don't know how much better you can pitch."

Sam Fuld hit a two-run double off Rodney and Oakland loaded the bases with no outs. After McClendon went to the mound, Billy Butler grounded into a double play that brought home a run and pinch hitter Eric Sogard tied it with a single.

Weeks hit a three-run homer in the seventh that put Seattle ahead 7-3. It was the third of his career.

Hernandez got a little help to stay unbeaten at the Oakland Coliseum over the last six years.

Former Gold Glove right fielder Josh Reddick, making his season debut off the disabled list, dropped a sharp liner for a two-run error that allowed the Mariners to tie it at 3 in the sixth.

Hernandez gave up three runs and eight hits in five innings. He is 6-0 at the Coliseum and has won four of his last six starts with a 2.87 ERA over 13 outings at the stadium since April 11, 2009.

Hahn, the 25-year-old righty acquired in a trade that sent All-Star catcher Derek Norris to the Padres, allowed only one earned run and three hits in 5 2-3 innings, struck out two and walked two.

After starting the first six games in the outfield, Ben Zobrist played second base for the A's.