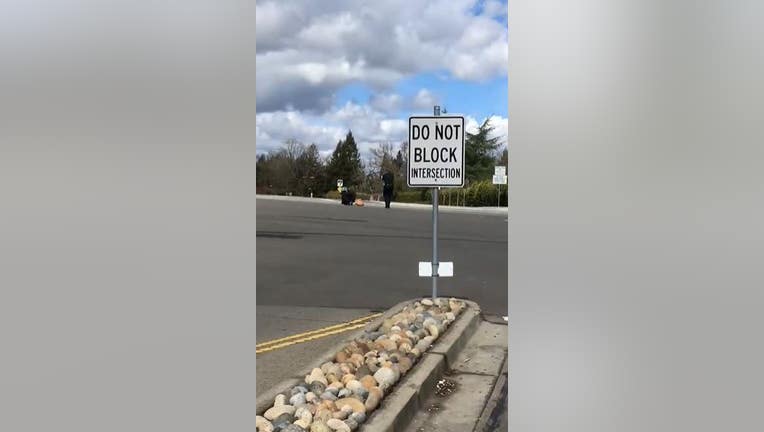 The graphic video is shot from inside a bystander's vehicle. The witness sounds stunned as he verbalizes what he is seeing from his perspective.

The video shows Hall advancing on Wilson who is backing up before he fires a single fatal gunshot at close range.

Wilson's family attorney John Burris on Monday called the incident a "cold murder" and that there was no provocation for deadly force.

The shooting on March 11 happened when law enforcement responded to calls of a man throwing rocks onto Interstate 680 traffic while standing from the Sycamore Valley Road overpass.

According to the officer's statement, Wilson, 32, pulled out a folding knife and opened it after Hall approached him and attempted to speak with him.

"The officer ordered him to drop the knife several times," the sheriff's office said in a statement hours after the shooting. "(Wilson) then advanced toward the officer, who discharged his weapon, striking the subject once."

Danville contracts their policing out to the Contra Costa Sheriff’s Department.

Burris had previously said Wilson's parents were concerned over the truthfulness of the police account of the incident. Wilson died March 17, nearly a week after the shooting.

Dozens protested Wilson's fatal shooting at the end of March. Demonstrators marched near the area where Wilson was killed.

Hall previously shot and killed Laudemer Arboleda in Danville in 2018.  Police dash cam and police-worn body camera footage of that shooting shows Hall firing his weapon at a fleeing vehicle.

Hall has since been placed on paid administrative leave.

Burris plans to hold a news conference on Tuesday to announce a federal lawsuit against the city of Danville alleging Wilson's civil rights were violated by Officer Hall.

A press release on behalf of Burris says, "[Hall] made no effort to deescalate; he seemed 'hell-bent' on bringing Wilson under control as if he 'were roping an uncooperative steer'. . .equally disturbing with the shooting was the utter lack of urgency in providing medical care."

Burris claims it was 25 minutes before paramedics arrived to the scene and that neither Hall, nor any other law enforcement personnel rendered aid before medics arrived.