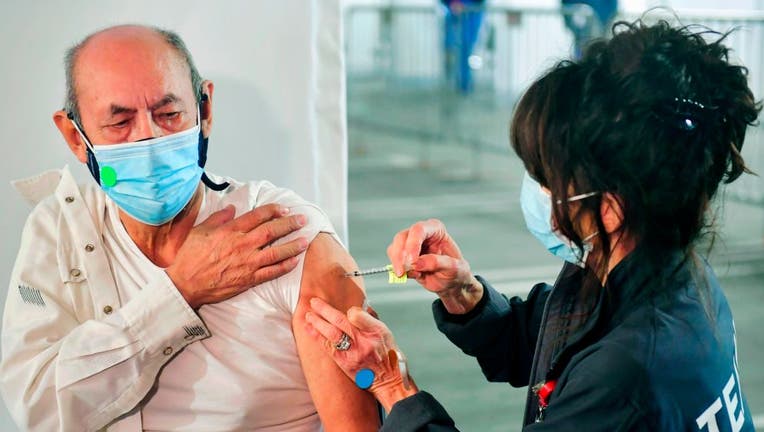 Maximo Michua, 74, holds his sleeve as Kathryne Acuna (R), Director of Ambulatory Clinical Services at Kaiser Permanente, administers his Covid-19 vaccine on the opening day of a large-scale Covid-19 vaccination site at a parking structure at Cal Pol

SAN FRANCISCO - A new poll by Bay Area Council conducted earlier this month finds hesitancy in some communities when it comes to getting the COVID vaccine.

The poll was conducted between March 10-16. Of the 57% who said they haven’t been vaccinated, 21% said they definitely or probably won’t get vaccinated.

The Council notes how that hesitancy could pose a challenge to public health officials who have been working to end the COVID-19 pandemic for more than a year.

"Getting people vaccinated is one of the most important things we can do to stop COVID and fully reopen our state and our economy," said Bay Area Council President and CEO Jim Wunderman.

Contra Costa County Supervisor told KTVU this week that getting vaccinated is key to outpacing the more contagious variants that have emerged from spreading and to create greater community immunity.

Centers For Disease Control and Prevention says herd immunity, or when enough people are protected from a disease because they’ve been vaccinated or have already had it, can make it hard for the disease to spread. But experts don’t know what percentage of people would need to be vaccinated in order to achieve herd immunity. Essentially, CDC’s take is that vaccinations are safer than risking getting COVID to protect yourself from the disease.

The poll found 19% of vaccine-hesitant respondents answered that they aren’t worried about COVID, 14% said they are already healthy and 12% fear a vaccine’s negative side effects. Another 12% said they simply don’t trust the vaccine and will rely on their own immune system to address any infection.

The poll also found registered Republicans are much more likely to be hesitant about getting the vaccine than Democrats. 31% of Republicans aren’t so sure about it compared to 7% of Democrats.

Education played a factor. 22% of those polled with less than a college degree said they were hesitant. The same percentage amount of parents polled wavered on their decision.

Another finding was that of groups who expressed a racial or ethnic affiliation, Latinx was the most reluctant to get the vaccine at 18%.

The poll found San Francisco is leading the way with 44% of respondents saying they’ve been vaccinated and they have the area’s lowest level of vaccine hesitancy at 7%.

By contrast, 33% of Santa Clara County respondents said they were vaccinated. Curiously, 44% of respondents in the North Bay say they’ve been vaccinated, but those from Napa, Marin and Sonoma counties showed the highest level of vaccine hesitancy at 23%.

Contra Costa County on Tuesday expanded its vaccine eligibility to the 16 and up age group, more than two weeks ahead of the state’s timeline for the same ages. Eligibility expands to all Californians who are 50 years old and up, starting April 1.