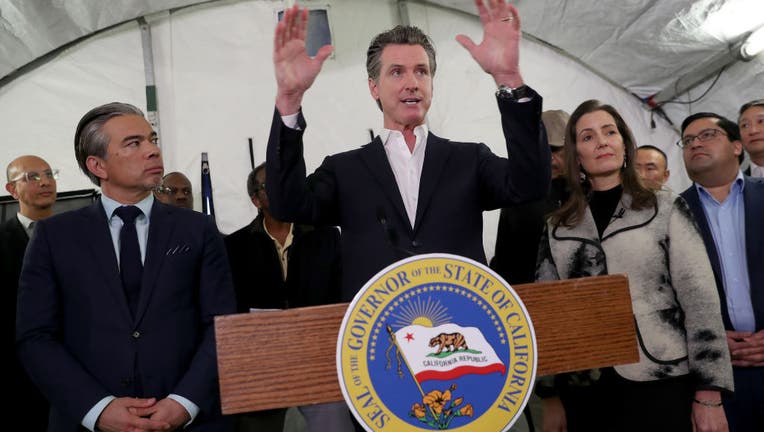 OAKLAND, CA - JANUARY 16: Gov. Gavin Newsom speaks at a press conference on homelessness in Oakland, Calif., on Thursday, Jan. 16, 2020. To the right is Oakland Mayor Libby Schaaf and to the left is 18th District Assemblymember Rob Bonta. The city wi

SACRAMENTO, Calif. - With millions of people out of work in California, Gov. Gavin Newsom on Wednesday signed a law giving tax breaks to small businesses that hire more workers by Dec. 1.

The law will reduce how much state taxes some small businesses owe if they have more employees working between July 1 and Dec. 1 than they did between April 1 and June 30. Businesses of 100 employees or less would get a $1,000 credit for the net increase of each new worker.

It only applies to businesses that have lost at least half of their revenue from April to June this year compared to the same time period last year. The credit is capped at $100 million statewide, or $100,000 for each business. Businesses get the credit only if they hire employees, not contractors. Small businesses that are owned by large companies are not eligible.

Newsom called it “one of the most significant tax credits in our state’s history” because of the provisions that restrict the benefits to small businesses impacted by the pandemic.

“So often these open-ended tax credits go to a handful of well resourced companies, not necessarily those small businesses that need them the most,” Newsom said while visiting Solomon’s Delicatessen, a small business in Sacramento.

California’s economy has been devastated by the coronavirus pandemic as the Newsom administration ordered many businesses to close for months to slow the spread of the disease. Californian lost 2.4 million jobs in April, more than all the jobs lost during the Great Recession a decade ago. The state has added back nearly a third of those jobs since then, but the unemployment rate is still 13.3% — higher than it ever got during the Great Recession.

As of Tuesday, the state lists 33 of the state’s 58 counties as the most at risk for the coronavirus, a designation that requires many businesses to halt indoor operations.

Unlike most tax breaks, businesses can also use the credit to lower the amount of sales taxes they have to send to the state. The goal is to help retailers what don’t pay much in income taxes but collect lots of sales taxes.

“There was a commitment among all of us to make sure that our small businesses come back,” said state Sen. Anna Caballero, a Democrat from Salinas who co-authored the bill along with Sen. Steven Bradford, a Democrat from Gardena. “We absolutely need to see them be successful and this is going to be one of the tools.”

Earlier this year, California allowed businesses with less than $5 million in taxable sales keep up to $50,000 of sales collections for the next year. It’s essentially a no-interest loan to these businesses. Wednesday, Newsom said the program has provided $106 million so far for these businesses.

Newsom also signed two other laws on Wednesday. One law exempts businesses from having to pay state taxes on loans received from the federal Paycheck Protection Program. The other law is an amendment to the state budget that, among other things, authorizes the state to spend various bond funds.