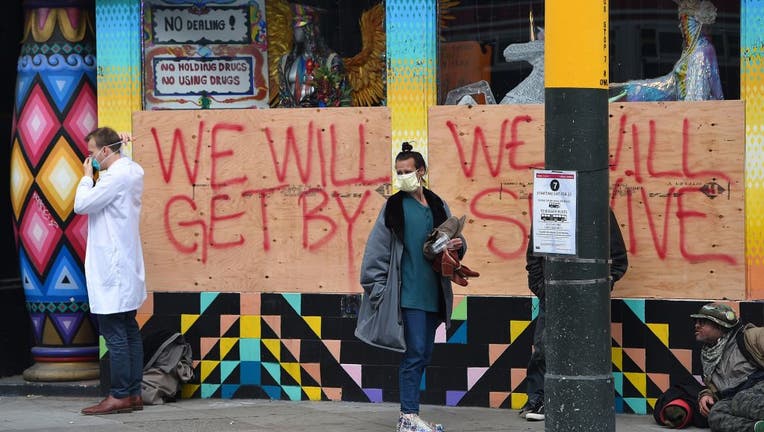 LOS ANGELES - More California counties were pushed into more restrictive tiers on Tuesday, leaving none in the least-restrictive yellow tier.

Pushing back to purple - the most restrictive tier - were Colusa, Del Norte, Humboldt and Lasson counties, meaning that 45 counties in California are now at this "widespread" level, according to new data provided by Dr. Mark Ghaly, the state's Health and Human Services Secretary.

Calaveras County pushed back into the red "substantial" tier. And Alpine and Mariposa counties moved backward to the orange or "moderate" tier.

As of Tuesday, no county was left in the yellow or "minimal" tier.

In San Francisco, which remained in the red tier they were put in last week, health officials are anticipating being bumped back to the most restrictive purple tier.

During a news conference on Tuesday, Director of the Office of Economic and Workforce Development Joaquín Torres outlined what San Franciscans should expect if new restrictions are implemented, which includes abiding by the state’s curfew and rolling back or reducing the capacity of several activities within 24 hours.

“This will require us to stop indoor operations at houses of worship, movie theaters, museums, zoos, aquariums, gyms and fitness centers,” Torres said.

The City's new virus cases reached 118 per day for the week ending on Nov. 18, up from 73 compared to the beginning of the month. San Francisco’s current daily case rate is just below 13 cases per 100,000 people, which is lower than the national and state average.

“We are at a critical moment,” Dr. Grant Colfax said. “We cannot let the virus get too far ahead of us, or we will never catch up.”

It wasn't all bad news.

Ghaly noted that some counties are progressing forward but he didn't name them because they had only improved for one week, not two, which is needed to achieve status into the next tier.

"Cases in California are growing faster than ever, we are in the midst of a surge," Ghaly said, before rattling off a bunch of statistics to bolster the state's repeated public plea that Californians need to wear masks and resist social gatherings -- including big Thanksgiving meals.

"For us, it's a major difference," he said. "And this will likely trend upwards."

COVID-19 hospitalizations have increased 81.3% in the last 14 days, with the current number at slightly more than 5,800 people.

"Hospital systems are stretched," he said.

And for all these reasons, Ghaly offered reminders that Californians should think of creative ways to celebrate the fall and winter holidays remotely, like he is going to do with his own mother on Zoom.

Drop off Thanksgiving meals for loved ones to show them you care, he said. Have a Thanksgiving lunch outside instead of dinner, when the air is colder and people want to head indoors.

"Take necessary precautions to protect your family and friends because you love them," he said.