The shock remained at Oakland police headquarters on Friday after the 'without cause' firing of the police chief the night before. Also on Friday, Mayor Libby Schaaf addressed graduating police cadet officers who are just beginning their careers as the chief is ending hers.

OAKLAND, Calif. - At least one city councilman on Friday said he was surprised that the Oakland police chief was fired and he’s gotten several emails from community members saying they don’t agree with her termination.

Speaking outside an Oakland Police Academy graduation at the Scottish Rite Temple, Councilman Noel Gallo said several of his constituents were unhappy that the Oakland Police Commission, a seven-member board of citizens, and Mayor Libby Schaaf, voted to let Anne Kirkpatrick go.

As far as he sees it, Gallo said the relationship with the police chief was “growing in a positive direction. I think the timing completely wrong. You don’t terminate anyone without a cause.”

Gallo said that the reactions he’s been getting of the phone and through email, are mostly people  saying, “it’s no longer City Hall but Silly Hall.”

Kirkpatrick has not responded publicly to her termination. Assistant Chief Darren Allison will serve as acting chief until an interim chief is selected. Allison will be the fifth chief since 2016, with the departure of Sean Whent amidst the Celeste Guap police sex scandal. He declined to comment to KTVU as he entered the graduation ceremony.

Gallo was joined by by Barry Donelan, the president of the Oakland Police Officers Association, in their shared disappointment at seeking Kirkpatrick go.

At the Oakland police academy graduation, Libby Schaaf told the crowd: "Leaders come and go" and that her decision to sign off on the termination vote was "extremely, personally difficult for me."&nbsp;Cristina Rendon reports

“These events don’t bode well for public safety in Oakland,” Donelan said in a statement. In court filings this week, the union wrote Oakland police are one of the most progressive departments in the country and not credited enough for it.

The Oakland Police Commission was created by a voter-approved ballot initiative in 2016 that was pushed by the Citizens for Police Accountability and was geared toward rebuilding a relationship between OPD and the community.

If they don’t have cause, like with this case, the commission needs the approval of the mayor, which they did.

Schaaf spoke to reporters Thursday night saying the trust between the commission and the chief was "irrevocably broken" and keeping the chief in her job would prevent the city from moving forward. She added that she was glad she hired Kirkpatrick and had no regrets. At the police academy graduation, Schaaf told the crowd: "Leaders come and go" and that her decision to sign off on the termination vote was "extremely, personally difficult for me."

Regina Jackson, chair of the police commission and who was hand-picked by Schaaf for the job, said “we did not take this lightly."

Jackson had been urged by many community members to oust Kirkpatrick as far back as two years ago. But Jackson wanted to be methodical and fair in the process in reviewing the chief's accomplishments and failures before making a decision. In that time, federal monitor Robert Warshaw, who is charged with overseeing police reforms, as well as civil rights attorneys, Jim Chanin and John Burris, have noted that the police department has backslided on several "tasks" it should have made nearly two decades ago.

In a statement, Jackson added:  "Since the Commission's inception, the Commissioners, along with the rest of the citizens of the City of Oakland, observed the Oakland Police Department's failure to increase compliance with court-ordered reforms."

Since Jackson has been at the helm of the commission, the volunteer board’s overall attitude toward the chief has been respectful but critical.

Earlier this year, the commission ruled to fire five police officers involved in the controversial 2018 shooting death of Joshua Pawlick, a homeless man sleeping with a gun, despite the fact that Kirkpatrick and internal investigators essentially exonerated them. 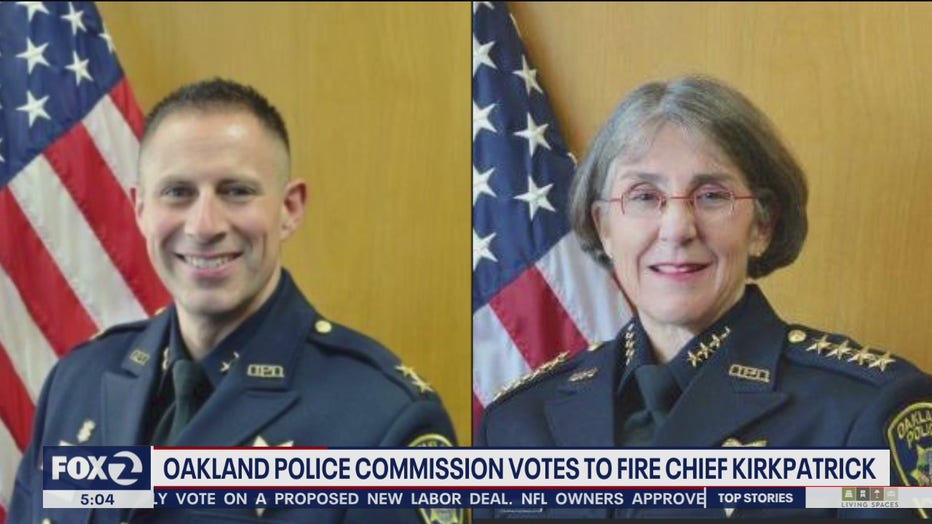 The commission has also been upset with the department’s use of force, lack of transparency, backsliding on court-ordered police reforms and with what they see as a continued and unnecessary show of militarization.

Jackson said she and her fellow commissioners are now looking forward to working with the mayor to find a chief who "will build trust in the community and address racial and gender disparities that continue to exist in the Department and in our City."

The new chief must address use-of-force issues and make changes so that a court-appointed monitor is no longer needed.

Jackson spoke at the police academy graduation, welcoming the cadets to the force. Until Thursday, Kirkpatrick had been also on the roster, too.
For Jackson, a decision has been made and it’s time to move on.